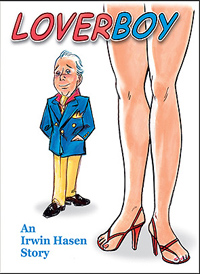 The legendary Irwin Hasen, co-creator of DC’s original Wildcat who is best known for his work on the classic newspaper comic strip Dondi, has written and drawn a 128-page graphic novel. Not bad for a guy 91 years old.

Loverboy, which purports to be something of a dramatized autobiography, will be released
by Vanguard Publishing in December. Joe Kubert and Neal Adams contributed cover blurbs; Irwin has been a teacher at the Kubert School.

In addition to Wildcat and Dondi, Hasen had been a regular
contributor to the golden age versions of Green
Hornet, Green Lantern, The Flash and Justice Society of America, among many others.