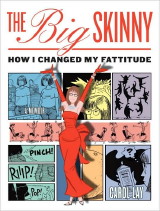 The Big Skinny: How I Changed My Fattitude

In the wake of [[[Perseopolis]]] and similar works, graphic novels have become ever more popular for acquisition editors at the major trade publishing houses. But, just as the direct market twists products in the direction of its own obsessions – spandex, punches, and chivalry twisted through at least two axes, these days – those mainstream publishers have their own market trends and forces, and they’re looking for particular things themselves. To be blunt, all of the big-publisher GNs seem to be memoirs of one sort or another. Some of them are “here’s my life in numbing detail” books, like David Heatley’s [[[My Brain Is Hanging Upside Down]]], and some are small stories of particular moments and times, like Lucy Knisley’s [[[French Milk]]] – but they all are personal stories of one kind or another.

Carol Lay, surprisingly, hasn’t written a book-length illustrated work before; she’s had several collections published – mostly of her weekly [[[WayLay]]] strip – but [[[The Big Skinny]]] is the first time she created a graphic work purely for book publication. And, since it’s from Villard, one piece of the huge Random House book conglomerate, you’d be pretty safe betting that it’s a memoir of some kind. And it is. But The Big Skinny isn’t just a memoir – it’s some more unusual for comics, though it fits into a pretty common prose format.

The Big Skinny is a diet book, in particular the “how I dropped umpty-ump pounds and you can, too!” memoir. Those are usually reserved for authors at least TV-famous, which Lay isn’t, but I suppose the novelty of the comics format substitutes for fame in this case. Luckily, Lay isn’t interested in writing a poor-me memoir of her fat years, but in focusing on the positive side: how she changed her habits to get to a healthy weight and stay there. She does run through her own life and relationship with food at the beginning of the book – twice, actually: once very quickly and then a more extended version – but that takes up only about the first thirty pages. The rest of The Big Skinny is a comics version of a friendly, accessible diet book: hints, tips, mildly frightening stories about unhealthy eating habits, recipes, and a whole lot of encouragement. I don’t know if Villard can manage to get Lay on [[[The View]]], but this is the kind of book that would go over very well with that audience: it’s casual but authoritative, friendly but compelling.

The Big Skinny is more outward-focused than usual for a modern comics memoir, which is good; the world of comics could use a bit less of the “oh, look, isn’t my navel fascinating” type of story, which has gotten pretty common in the past couple of years. Lay does talk about her own life, but it’s within that larger framework. And she uses her own story to explain what she’s learned – she’s an example, rather than the center of the world.

The art is as sprightly and sunnily offhand as usual for Lay; reading it, I realized it had been a long time since I’d read one of her strips, and waiting that long was a very bad idea. She’s a splendid communicator, and her skills have translated brilliantly from her short strips to this longer form. I can’t imagine the Wednesday Crowd is going to be particularly interested in The Big Skinny, but they’ve never cared for Lay to begin with – and that’s entirely their loss. This is a great book for anyone who’s ever wanted to lose a few pounds – or who has lost a few pounds, now and then, and wants to figure out how not to have to go through that again.