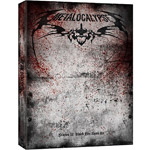 I somehow missed the advent of Cartoon Network’s Adult Swim but recognize its contributions to pop culture.  As a result, as the DVD sets have been arriving for review, I’ve managed to play a bit of catch-up.  The random humor of [[[Aqua Teen Hunger Force]]] was lost upon me and I was excoriated for being too old to appreciate it.

Well, I certainly enjoyed the second season of [[[Metalocaplypse]]] a lot more. Largely, this had to do with the level of wit and creativity that is brought to each episode of the series, which aired from September 2007 through September 2008, with a six month break in between.  The cartoon is derived from the [[[This is Spinal Tap’s rock mockumentary]]] roots but works because there’s so much that can be parodied.

Deathlok is an unnaturally popular metal band and the performers are great when on stage and totally dysfunctional away from the crowds.  Each of the 19 episodes comprising [[[Metalocalypse Season II: Black Fire Upon Us]]], currently in stores,  has fun with some aspect of stardom and rock’n’roll.

The writing is sharper and the animation better, although still rather limited. Brendan Small and Tommy Blacha are to be commended for sustaining what could have been a one-note concept.  Having said that, the introduction of the Tribunal, the shadowy governmental force that works to tamp down their rising popularity feels like an ill fit, especially since the band triumphs over “The Man” each time so becomes flat and predictable.

While some shows work through a single sitting, this does not.  You find some of the gags and character bits repetitious atop the boring Tribunal crap. And if you’re not a metal head, the music can switch from entertaining to pounding real fast.

There aren’t a lot of extras but they’re all hidden including five deleted scenes, music videos, and Klokateers: In Memoriam, and Nathan reading [[[Titus Andronicus]]].