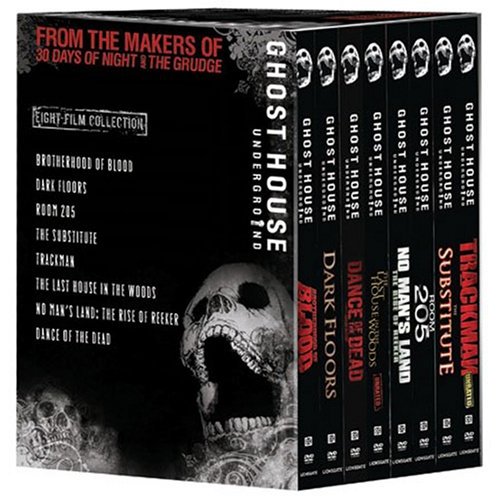 In the coming days leading up to Halloween, we will be reviewing each film collected in Lionsgate’s Ghost House Underground Collection. In the set are eight films hand picked by "Horror Kings" Sam Raimi and Robert Tapert who have produced films such as The Grudge, Evil Dead, and 30 Days of Night.

Each of the films encompasses a different aspect of the Horror genre, from zombies on down. The first film; No Man’s Land: Rise of the Reeker deals with a group of people trapped in a deserted rest stop who are hunted by a Grim Reaper-looking figure. In Dance of the Dead, a group of teens are the only ones left when their town is infested by zombies…on prom night! Dark Floors revolves around the balance of dark and light and some pretty gruesome monsters who terrorize people in a hospital. Brootherhood of Blood takes place in a world where vampires and humans are at war, while two come together to fight a darker evil. The Substitute is about a malicious alien that terrorizes a bunch of sixth graders. Trackman is about a group of bank robbers on the run get grabbed and tortured by a madman. Room 205 revolves around an apartment haunted by a ghost with unfinished business. Finally, Last House in the Woods is a Blair Witch type film about a group of cannibals picking off unsuspecting campers in the middle of nowhere. Each day, we will be bringing you reviews on each of these great movies, leading us up to the biggest day of the year for watching horror movies: Halloween!

Because we can’t rate these movies like we would Spider-Man 3, we are issuing a special criteria in rating each film. Each of the movies will be rated in Acting, Plot, Special Effects, and Campiness. Now, seeing as how campiness usually draws a negative connotation, understand that in the horror genre, a film that doesn’t take itself too seriously can make it a cult classic, just look at the Evil Dead series.

Normally, our rating system at ComicMix is numerical out of 10 for the film overall. Here, because we are rating horror movies, we will be giving each film an overall rating, as well as a Scare Factor, on a scale of one to five; just how scary the movie is, and those fans of the genre out there know that this could be a deal breaker for for most horror films.