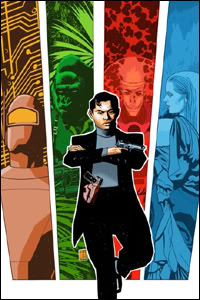 For those who gave Jeff Parker’s Agents of Atlas miniseries a shot a couple years ago, it comes as great news out of San Diego that a new ongoing A of A series is on the way.

Parker and editor Mark Pannicia shared some dirt with CBR on the new series which will show up early in 2009.

Paniccia added. "’Weird turn of events’ is something readers should get used to with this book. Jeff’s got quite a few ‘Oh &%$@#!’ moments planned."

The "Agents of Atlas" may control a global empire, but their main base of operations is currently under a California city that’s quickly becoming a Mecca for Marvel heroes. "At the moment the Agents still work from the underground city below San Francisco. But the surface there just became the home to a lot of nosy mutants!" Parker explained. "So they may find it necessary to relocate soon to function without interference."