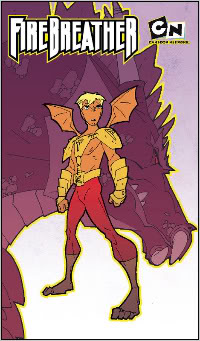 One of the cool early pieces of news out of San Diego has been Cartoon Network’s development of a trio of Image properties for cartoons.

That would be Mice Templar (created and drawn by Hammer Of The Gods co-creator Mike Avon Oeming with Bryan J.L. Glass), Firebreather, and The Vanishers.

CBR has an interview with Firebreather creator Phil Hester who talked about the upcoming two-hour cartoon and the potential for an animated series.

Both Hester and Kuhn credit film producer Julia Pistor for seeing "Firebreather" through the hazards of Hollywood development to find it a home. "Originally, we were optioned by Paramount, and during that time they didn’t really do anything," said Kuhn. When the option was up, it was Pistor who contacted the creators with an offer to help. As a vice-president at Nickelodeon, Pistor has a long history of shepherding successful animation projects. She recognized "Firebreather" as something special.

The executive who had brought "Firebreather" into Paramount had unexpectedly passed away, leaving the project with no champion when the option period had passed. "She said ‘this is too good to just let die," Hester explained. "She offered to take it out herself and find a place to set it up."

I can only wonder (and hope) a Perhapanauts cartoon could soon follow, as writer Todd Dezago recently told me there had been some serious interest in that Image book as well.