It’s something every single sci-fi geek has wondered at some point, possibly while concocting fiendishly devious plans: what if I could turn invisible?

Of course, all the way back to H.G. Wells’ classic novel, The Invisible Man

, we have been told time and time again that this power would basically screw us over. I mean, in that novel, the main character found himself permanently invisible, went insane and then became a maddened killer before he was put down like a dog in the street. This idea of how much it would suck to be permanently unseen has been told time and time again, including the 1950s [[[Invisible Man]]] television series and the Chevy Chase adaptation of Memoirs of an Invisible Man

. Heck, the Invisible Woman of the Fantastic Four

has control over her abilities and yet even she gets shafted since she has to deal with the fact that she’s overshadowed by her less powerful teammates.

In 2000, the Sci-Fi Channel began a live-action television series in which writer/creator Matt Greenberg gave us a whole new twist on the familiar story. Sadly, the show was cancelled and only enjoyed two seasons. But this year, the first season was finally released on DVD — and there’s a good reason to pick it up.

In the pilot of “Invisible Man” (later called “I-Man” in the second season), we are introduced to Darien Fawkes (played by Vincent Ventresca), a mid-level thief and con-artist who found himself imprisoned for life after actually trying to do the morally right thing for once in his life. But salvation comes when his brother Kevin (David Burke) shows up. Kevin was the golden child whereas Darien was the screw-up. Now a highly paid government research scientist, Kevin tells Darien that he can be released from prison if he just participates in some experimental (but “perfectly safe”) brain surgery.

Seeing no alternatives and deciding to trust his brother, Darien agrees. After the surgery, he’s finally told just what the deal is. His brain now has an extra gland attached to it which secretes a chemical code-named “quicksilver.” Quicksilver bends visible light around it. When he wants to, Darien can cause the quicksilver chemical to secrete from his pores, covering his entire body in its coating, making himself invisible to human eyes. By focusing, he can release a greater amount of quicksilver to also cover his clothing or any objects he might be holding. When he wants to be seen again, it’s easy enough to shake the stuff off.

There are a couple of side-effects, however. For instance, the gland continually releases toxins into his brain that, over time, will drive him into an insane murderous rage (dubbed “quicksilver madness”). And the more he uses quicksilver to become invisible, the faster this will happen. But that’s okay, because the secret government agency who experimented on him are perfectly happy to give him regular doses of a “counter-agent” to keep him mentally stable… provided he works for them, of course.

Like his various predecessors in literature and media, Darien Fawkes is indeed a character who has been screwed over and is somewhat tortured. Unlike the rest of them, however, he also knows how to have fun. In each episode, any moment of angst is equally balanced by a moment of comedy. Darien may be a secret agent, but the organization he works for is so cheap and limited on funding that agents have to cover their own costs when making a report via long-distance call. And when Darien is shocked to learn the agency doesn’t keep any safehouses in case of emergencies, he’s simply told “it was either the safe house or the electric bill!”

Unlike previous invisible men, Darien isn’t alone by any means. He’s got the Keeper (Shannon Kenny), a mysterious woman who’s never completely clear on whether she actually cares about our hero or just the quicksilver gland. And he also has his partner Hobbes (Paul Ben-Victor), a military veteran who was also drummed out of the FBI due to his deep-seated paranoia, outlandish conspiracy theories and occasional habit of physically assaulting his superior officers. Together, the three of these characters have a great banter that fans of Buffy

and similar programs will enjoy. 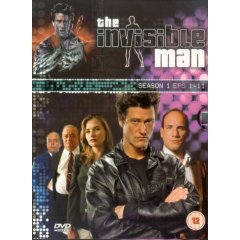 Rounding out the cast is Michael McCafferty as the hilarious yes-man Eberts and the comic genius Eddie Jones as Darien’s boss, a man known only as “The Official,” who loves his job and Machiavellian ways so much that he actually chuckles to himself while engaging in blackmail and black ops.

The humor of the show makes the dramatic moments pop out that much more. When you become accustomed to seeing Darien being a deadpan, laidback guy who’s always ready with a quick quip, it’s that much more interesting to see how he changes when he occasionally suffers from “quicksilver madness” and becomes a violent psychotic with blood-shot eyes. It’s a major testament to Vincent Ventresca’s acting ability that he’s able to do this convincingly, especially since this was his first time as a lead in a television production (previous works include [[[Boston Common]]], Romy and Michelle’s High School Reunion

, and a spot on Friends

There is also a lot of intelligence in the show. All of the characters have their own very personal code of ethics and morality and so there are constant disagreements between them about how they do their job and what their main objective is. Also at play are themes involving perceptions or accepted truths that should be questioned (very fitting for a show about an invisible character). For instance, Darien is clearly the “bad child” of the family, spending years as a thief and occasionally serving jail time, whereas Kevin was the one who won awards and became a highly respected scientist. Yet at the same time, Darien is sent to prison for trying to save a man’s life, whereas Kevin is perfectly willing to subject his own brother to an experimental surgery that, at worst, will kill him or, at best, will completely alter his life and have side-effects no one can predict.

This intelligence is also applied to Darien’s actual super-powers as well. Invisibility is one of those tricks that usually never makes complete sense in a story or movie/TV show and often seems to have fast and loose rules. One question that always occurs is how the invisible character can see if light is completely passing through them? And if the character is able to turn their clothes invisible, why not every object they are holding or person they are touching? The series isn’t shy about offering up explanations — for instance, because the quicksilver bends light, there is still some reaching Darien’s eyes (and Darien himself theorizes it’s allowing him to see other parts of the spectrum). And since it’s just a liquid coating he controls, he can play fast and loose with what he can or can’t make invisible. Heck, if he wants to, he can coat an entire wall with quicksilver, providing himself an invisible shield. There are also interesting side-effects, including Darien’s tendency to accidentally frost the air around himself. You see, since he’s not absorbing light when he’s invisible, the quicksilver coating reaches freezing temperatures. This kind of layering gives the show a bit more grounding — at least as far as the science of invisibility.

Are there occasional episodes and moments where things get a bit hokey? Sure. But even those episodes are enjoyable (and let’s be honest, we can point to many examples of hokeyness in just about every sci-fi series). In an age when a lot of sci-fi/fantasy shows seem to put an emphasis on angst and loneliness, it’s great to have another example of a program that balances all of those negative emotions with entertaining wit and fun-filled adventure.

Alan Kistler used to think he was invisible when he was a child. Then he realized he was just neglected. He has been recognized by Warner Bros. Pictures and mainstream media outlets as a comic book historian, and can be seen in the “Special Features” sections of the Adventures of Aquaman and Justice League: New Frontier DVDs. His personal website can be found at: www.KistlerUniverse.com.