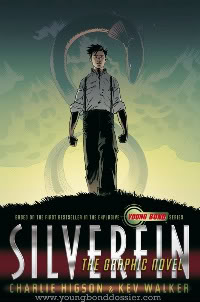 Fans of the James Bond franchise have a lot to look forward to this fall, as the first ever Bond graphic novel, Silverfin, will be coming out and, of course, Daniel Craig returns as Bond in The Quantum of Solace.

On the graphic novel front, Bond site Commander Bond has some previews of the art and the cover, seen at right. There’s also a little information on the story, right here.

Puffin Books have released the official blurb for the forthcoming graphic novel adaptation of Charlie Higson’s SilverFin. Adapted from Higson’s debut Young James Bond adventure by artist Kev Walker and featuring more than 300 full color illustrations, the SilverFin graphic novel is slated for release on 2 October 2008 in the UK.

The blurb follows: It’s James Bond’s first day at Eton, and already he’s met his first enemy. This is the start of an adventure that will take him from the school playing fields to the remote shores of Loch Silverfin and a terrifying discovery that threatens to unleash a new breed of warfare.

Meanwhile, the Bond central site, 007, has the trailer for Quantum of Solace. It looks like another more cerebral Bond film, hewing a bit closer to the novels.

There’s also a reference that can’t help but conjure up the Bourne films, as Bond apparently goes rogue and M calls out: "Find Bond!"