Let’s get this out of the way up front: Not a great week for comics. A few good eggs, but a whole lot of blah hit the shelves this week. So it goes.

In other news, I’ll be in Charlotte at Heroes Con this weekend, so if you make it there, give me a shout. Or, if you’re the creator of one of the books I just called "blah," you can punch me in the face. 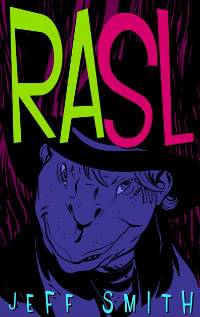 — As usual, the only complaint with Jeff Smith is that he and deadlines are like oil and fire. And yes, oil and fire is worse than oil and water. Trust me.

This issue was supposed to come out last month, but it’s here now and it’s a dandy of an issue. I’m a fan of Bone

, but without pause I’d call RASL his best work yet.

The dimension-hopping lead’s troubles continue as he learns an organization of some sort has caught onto his little exploits and is in hot pursuit. Smith throws in a lot of sci fi, but with his unwavering command of the medium he never lets the story out of noir territory.

This is the most serious and adult story Smith has done, which is certainly of note, but I find more interesting his experimentations with story structure. He’s pushing himself to new levels, and we get to enjoy the ride (stop-and-go as it is).

— This issue doesn’t have that usual snap-crackle-and-pop of Peter David’s dialogues and monologues, but that’s by design as we see the fallout of Arcade’s near-complete destruction of Mutant Town.

It’s one big exhalation of an issue, with Madrox crumbling mentally (as ever) and the team rallying (sort of). David uses the moment to make a big paradigm shift with the team and the series, set up brilliantly with a series of reverses involving government stooge Val Cooper.

Really, though, the big draw is David’s intro update on his family. Those always kill me. Someone pay him to write a third person memoir, please!

— This comic is sort of a mashup between the NFL Street videogames and Worlds of Warcraft. It’s completely ridiculous, with monsters and people playing an X-Treme brand of football. Still, though the plot is pretty much on holiday, some great art makes the whole package a field goal (which is just shy of a touchdown in the land of sports metaphors).

Batman and the Outsiders #8 — It’s a little hard to read this without thinking about all the hubbub around writer Chuck Dixon’s departure from DC (unhappy words were said). But, if you can, you’ll find a decent read, though it features too many dumb elements. Remac? A villain breaking his fingers because he’s "barefoot"? A ray weapon shooting the moon? What is this, The Tick?

Ghost Rider #24 — A step down of a guest artist steps in for a fill-in-the-blanks issue that catches us up on the evil angel and some bad doings in prison. It’s not up to the par Jason Aaron had set for the series, but there is an unforgettable exchange comparing the respective head counts of God and Satan. Aaron never seems to let an issue go by without one of those moments. 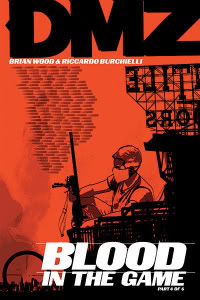 DMZ #32 — A few big reveals in this one as everyone tries to figure out what to do now that the great political hope has been gunned down (but not killed). Really, though, this issue is all about showing how much Matty has changed, both through the perceptions of those around him and his own actions.

Guardians of the Galaxy #2 — You’ve got to love the return of Major Victory from the old GotG, so why am I not loving this book? It still seems like too implausible of a team-up, for one, and the threats aren’t interesting yet. And with evil space Catholics coming up, that doesn’t look to change any time soon.

Ex Machina #37 — The political team tries to figure out what to do about the crazy pink-haired chick that’s tearing up New York, and it’s a good lesson of how so much of politics isn’t about making any substantive progress on issues. Between that and a nice moment with crazy old Leto, it’s another quality issue from Brian K. Vaughan.

— This latest plot with Red Tornado hews way too close to Brad Meltzer’s disappointing first issues, and there’s not much worth note in this issue aside from a fun moment of relationship counseling between Clark and Hal and the young Connor.

— Frank gets himself into the middle of a big mess with ties back to his war days in this down-the-rabbit-hole issue. There’s a great sequence where he takes on a whole mess of foes and he can’t use lethal force that adds a new level of respect. Would’ve been a winner if the art didn’t stray into Mike Mignola Light territory.

Checkmate #27 — After Infinite Crisis, Bruce Jones summarily ran Nightwing into the ground, and early signs are that he might be taking Checkmate in a similar direction. Gone are any traces of espionage as we have an unbelievable new hero that’s like a love spawn of Hulk and Frankenstein and a new villain that’s even worse.

— I really liked Mark Millar’s "Enemy of the State" storyline, and this one started off well. It’s The Future, the heroes have lost, and Logan is acting like one of Leone’s dirt farmers in the opening scenes of a Western. Then we get some preposterous progeny of Hulk (real this time) and a bunch of too-cute superhero cameos. And everything goes straight to hell when it’s revealed the United States are divided up among supervillains and given clever names. No thanks.

Kill All Parents #1 — Speaking of too cute for its own good, this Image series starts off with a boatload of cheekiness and nothing behind it. The gist is that all heroes have dead parents and were really created by a secret agency. Clever enough, but it pirates off Superman and Batman without adding much, and the expected superhero backlash relies on the flat out stupid event of a janitor finding classified documents. Right.

Publishers who would like their books to be reviewed at ComicMix should contact ComicMix through the usual channels or email Van Jensen directly at van (at) comicmix (dot) com.