Rene Engström on SPX and the ‘Anders Loves Maria’ Tour 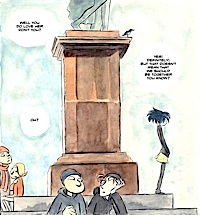 A while back, I spoke with Anders Loves Maria creator Rene Engström about her webcomic and where she finds inspiration for the popular series. Yesterday, Engström provided a little more insight regarding her creative inpirations by posting a video tour of the Gamla Stan neighborhood in Stockholm, Sweden, where many of the stories in ALM are set.

Regular readers of the series will recognize many of the buildings, statues and other landmarks Engström has used as a backdrop for stories, including the monument where Anders and Bjorn recently had a heart-to-heart of sorts. For anyone not familiar with the strip, well… you’ll probably find it interesting, too — and for more than just the beautiful Stockholm scenery. After all, one of the most popular questions posed to comic creators tends to be “Where do you get your inspiration?”

Thanks to Engström, fans of ALM now have an answer.

Also of note: Engström has posted a recap of the Small Press Expo held this past weekend in Stockholm, as well as a few photos from the show. Apparently, confusion among event organizers when it comes to the webcomic side of the industry is a common occurrence, no matter where your show is held.

Mind you they did seem very unorganised when it came to booking a table (you couldn’t), and they really had no clue what to do with webcartoonists. At one point they were trying to push me into this locked, out of the way, media room, but I refused that idea and stole a spare table and set myself up right near the entrance to the con. Which was good and bad. Good because of the traffic, but bad because everyone thought I was the information desk. “No I don’t know where the toilets are, thank you very much, please read my webcomic.”

Rick Marshall was Online Managing Editor for ComicMix before joining MTV's SplashPage. Previously, he was Online Content Manager for Wizard Entertainment. He has written for several daily newspapers, alternative weekly newspapers, trade magazines and online media, and was named "Writer of the Year" by the New York Press Association in 2005.