fans this weekend to provide some addiitonal insight on the film. With ticket prices as they are these days, we figured ComicMix readers would appreciate the extra review before they parted with their money. -RM] 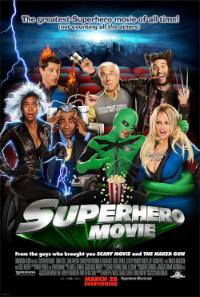 To begin with, this movie isn’t terrible. But before we get into that, a brief history lesson:

is a horror-spoof franchise that began in 2000 and was helmed by six writers that included the Wayans brothers and their team from previous projects. Also included were writers Jason Friedberg and Aaron Seltzer. This team’s only previous credit was the 1996 spy spoof Spy Hard

, starring Leslie Nielson. As a whole, this was the creative team responsible for the first two Scary Movie films, but they opted out of a third film, and the franchise continued with Airplane

creator David Zucker at the helm. Zucker brought along Pat Proft, who he had previously worked with, and a new guy named Craig Mazin, who worked on a quirky superhero comedy from 2000 called The Specials

Still with me here? Good, because we’re almost to the point, I promise. Upon leaving the franchise after Scary Movie 2, two of the six writers decided they weren’t quite done with the “spoofing genres” game and went on to write and direct Date Movie

. (The original trailer for Date Movie even tagged the film as “from two of the six writers of Scary Movie.”) They also went on to do Epic Movie

. At this point, if you’re not bleeding from the ears, you may be asking yourself, “Why did I need to know any of this?” Well, because those hating on this film based purely on its existence need to know that [[[Superhero Movie]]] was not the brainchild of any of the people attached to the three terrible spin-off-genre-spoofing-machines, be they [[[Date]]], [[[Epic]]], or [[[Spartan]]]. Instead, it is that of Craig Mazin, who created 2000’s superhero comedy [[[The Specials]]], starring Thomas Hayden Church and Rob Lowe (pick it up on DVD, it’s pretty good).

Now that I have all that off my back, let me reiterate that this film is actually not that bad. Heck, it’s even downright tolerable, and that’s saying a lot here. The concept, for those of you living under a rock for the past decade, is that this film is spoofing “all” (really only four are directly referenced in the film) superhero movies. The sad part is that the film is mainly a Spider-Man

spoof, if nothing else. There are mentions of others such as X-Men

, but the film is almost a shot-for-shot parody of the first Spider-Man film. If you’re hoping to see references to things like Hellboy

or even something as mainstream as Hulk 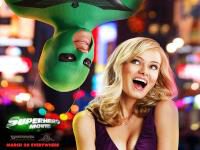 When it comes to the comedy, which is what those other three titles were lacking, Superhero Movie holda up. With a supporting cast of Leslie Nielson, Jeffrey Tambor, Brent Spiner, Dan Castellaneta and Christopher McDonald, the pedigree of the film alone makes it worth watching. The comedic style was very much like that of a Zucker film: chock full of scenes with extraneous dialogue in the foreground and unbridled chaos in the background. If you enjoy Zucker comedies, you’ll probably enjoy this film.

While the supporting cast needs no praise, the leading cast was a little less than impressive. The lead, Drake Bell of the television series [[[Drake & Josh]]] (it took an 11-year-old to make this connection for me) and Emmy-nominated actress Sara Paxton. The two play the poor man’s Tobey Maguire and Kirsten Dunst, respectively, but the cardboard acting chops that these two bring to the table is nothing to jump up and down for, no matter how many hours, combined, they make up on a week of The Disney Channel.

All in all, I was hoping for a little more depth in the world of superhero films, and I’d like to believe that this was an issue with licensing rather than “I don’t know how to make fun of [[[Superman]]], so I won’t touch it” — but it’s hard to believe there is a part of creative real estate that the Weinsteins haven’t already conquered. Do I recommend spending $10.50 to see this with a legion of screaming, pre-teen Drake & Josh fans as I did? No. But I doubt the leaves will change color before this film is available on Netflix or Blockbuster Online.