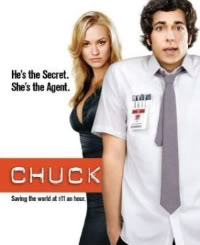 The long delay ’til the next season of NBC’s Chuck gets a bit of a reprieve this summer when DC Comics — via the Wildstorm imprint — releases a six-issue Chuck comic book miniseries.

From DC’s solicit, it sounds like the series will be trying to expand the scope of the TV series, which has a little thing called "budget" hemming it in.

The hit NBC television series comes to comics as Chuck Bartowski and his friends are about to take the world by storm—literally! From series co-executive producer Peter Johnson (Supernatural: Rising Son) and series writer Zev Borow joined with artists Jeremy Haun (The Leading Man) and Phil Noto (Jonah Hex) comes an adventure too big for television!

In this globe-trotting, action-packed adventure, Chuck will see many exotic locales, dodge numerous bullets, and be tortured by the world’s greatest…tickler?

Call me cautiously optimistic about this one. I really like the premise of Chuck, and I enjoyed the first few episodes. But things became very repetitive very quickly, and the gaps in logic became too unfathomable even for a "fun" show. Still, it has the chance to be this generation’s Get Smart, and that’s nothing to sleep on.