REVIEW: Cleopatra in Space: The Thief and the Sword

Cleopatra in Space: The Thief and the Sword
By Mike Maihack
191 pages, Scholastic Graphix, $12.99 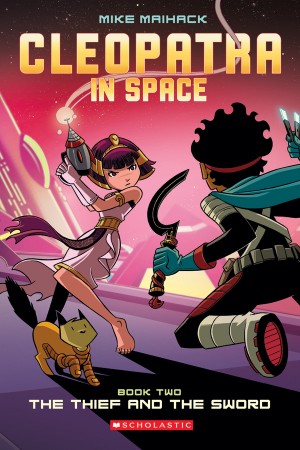 When Scholastic brought Mike Maihack’s webcomic Cleopatra in Space to print, it seemed like a perfect fit for their line. Unfortunately, the protagonist had as much to do with the real life Cleopatra as does the Queen of England. Target Practice was an Egyptian-flavored space opera with an overly familiar feel to it, much like the overhyped Amulet series from Graphix.

We now have the second volume and it does little fresh or different. In fact, it does less than volume one, slowing things down. Considering the annual release pattern, young readers deserve stories with beginnings, middles, and ends. Here, we start in the middle and reach page 191 without too much happening, leaving us with a cliffhanger that will frustrate the audience and make parents feel as if they wasted their money.

Maihack clearly studied comics when the decompressed storytelling of the late 1990s and 2000s were all the rage. At the time, graphic novel collections were increasingly valuable to the bottom line and six issue collections were the sweet spot. That meant pacing went way down and things dragged out. Here, Maihack spends lots of time watching people run, jump, fight, and so on without much of consequence happening. Similarly, he never deepens the characters so they remain flat, two-dimensional types rather than complex beings.

Maihack clearly knows how to tell a story and his character designs are good. His color palette is interesting and he brings some nice emotion to his story but that’s as far as it goes and for the price, more is expected. Heck, I’ll say, it’s demanded.