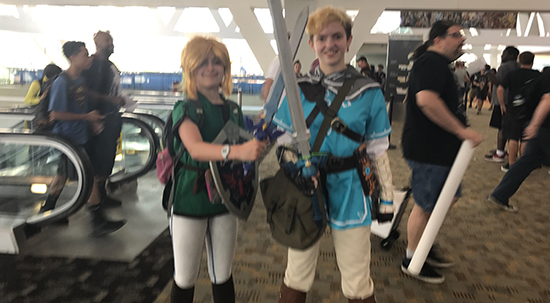 I spent last weekend at the Baltimore Comic-Con with my niece, Isabel, in all her cosplay glory: not just one, but three terrific outfits. Oh, yeah, also in attendance were ComicMixers Mike Gold, Joe Corallo, Glenn Hauman, Evelyn Kriete, and Emily S. Whitten (Denny O’Neil had to cancel). Unfortunately, Isabel and cosplayer supreme Emily never had a chance to meet because whenever Emily showed up, Iz was off checking out the con and also spending her aunt’s money. (How much of her aunt’s money? Let’s just say that I am a very indulgent aunt. *smile*)

Izzy and I only made it to one panel. I don’t remember the exact name because I am old and getting older – though my ego was boosted when more than one person I met that weekend took me for 14 years younger – but it was about industry women and their opinions on where the industry is today and where it’s headed. The topic turned to comic book shops and the unfortunately still ubiquitous problem of fan boys (and I do mean “fan boys” in an insulting manner) unable to deal with OMG!!!! There’s a creature with two enormous growths on its chest!!!! in the store.

Auntie Mindy was plotzing as Isabel added her opinion to the discussion, comparing her own experiences with bullying by classmates for her love of comics and gaming to the unhappy experiences of many of the women in the audience who talked about what they encounter when they enter their local “He-Man Women Haters Club.”

I also must admit that, although I have been the subject of bullying (as I mentioned in a previous column), I’ve never experienced it in a comic book store; have never even thought about it, to tell you the truth. Either I have been very lucky in my choices of where I bring my business, or the fact that comics emporia became a fact of comics reading life when I was already an adult prevented the “fan boys” from daring to open their mouths to me.

I also should admit that I don’t really understand the women who let it bother them – as I said at the panel, “to paraphrase Bryant Gumbel or Bob Costas on their show(s) talking about sports, the only color that matters is green. As in $$$$.” In other words, it’s a really stupid proprietor who makes a customer feel, at the very least, uncomfortable, in his store.

I also want to publicly apologize to the lovely young woman who was sitting a couple of rows behind me to whom I think I was rather rude. She was recounting the time when she went into a comic book store and some jackass said to her, “I’ve never seen a woman in her before” (I may be paraphrasing – again, my brain is hijacked), and how it made her feel so uncomfortable.  I turned around to her and said, “And then you say, ‘Well, now you have.’” I guess you had to be there – I said it with a lot of snarkiness – she kinda blinked. I think I apologized to her, but, anyway, I don’t know if she reads this column, but it’s been bothering me, so I wanted to put it out there. I’m sorry, lovely young woman with black hair. I was really rude. In fact, I think I was guilty of a bit of bullying myself.

Other than that, Izzy and I had a great time. In fact, I would say that a good time was had by all.

Except… for the drive home. When the Giants demonstrated the axiom “no guts, no glory,” after blowing a 21-point lead and they chose to punt instead of going for it on a 4th and 1, allowing the Eagles and rookie Jake Elliot to drill a 61-yeard field goal as time expired.