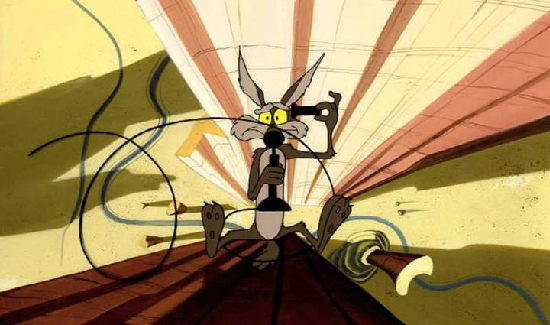 There’s a rule for tightrope walkers: don’t look down. If you look down, you’ll fall. Focus instead on the other end of the wire, where you’re headed. Focus on the goal. I’ve always felt that’s good advice for writers as well.

You can’t just say you believe. You have to choose to believe. Any belief worth having must be chosen.

Can you falter? Yes. I’ve looked down a few times. I doubted. I fell. You wonder, you question, you doubt. In the end, if you’re going to continue to write, you have to look back up and choose to believe that you can write, that you are a writer. Every time I start a story, every day that I sit down at this keyboard, it’s an act of faith.

That doesn’t mean you shouldn’t be critical of your own work. You just have to criticize without ego. You have to take criticism without ego. I know people whose whole sense of self-worth is tied up with their work. Writing is too slender a reed on which to place such an existential weight. It’s not about you; it’s about the work. Your objective should always be to make the work better. You must also accept that some parts will be better than others and some parts worse. Some parts will, in fact, be good. Deal with it. If you have any talent, any skill, some parts of the work should be good. It’s okay to claim that.

Your writing will never be perfect. That’s inherently impossible especially when writing on a deadline. All it can be is as good as you can make it at that moment. It doesn’t have to be perfect; Shakespeare isn’t perfect. If you doubt me, go read the climax of Cymbeline.

Whenever I’m asked what I think is my best story, I invariably answer, “My next one.” That has to be true. If it isn’t, I’m done. Might as well quit. I like writing too much to want that to happen. Well, most days I like it too much. Some days I hate it and that’s normal, too.

The best way to become a better writer is to write. We all start with a certain amount of crap in our systems and you have to write the crap out. There are no shortcuts; just accept that a certain percentage of what you do is crap and keep working. Over time, with diligence, with luck, you’ll write less crap. Don’t worry about the doubts or the fears; we all have them and we all wrestle with them. Some days they win but, as you go on, those days become fewer. So keep at it. And remember. . .