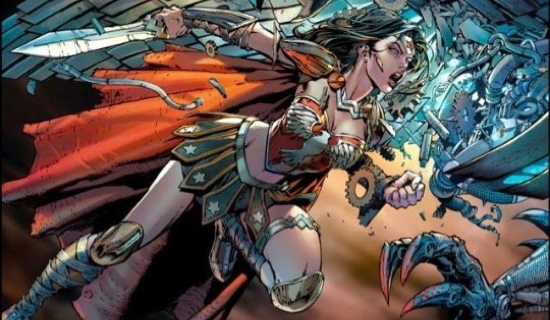 Of arms and the man I sing • Virgil

If high-flyin’ kick-ass jelly is your pleasure, sir or madam, and you haven’t yet seen Wonder Woman, well, skedaddle. Plenty of action there and you can still see it on the big screen, the way god – Zeus? – intended it to be seen. The USA Today movie maven wrote that during the last battle, the CGI seams were showing. Maybe, but I didn’t see them.

But there’s more to the film than excellent mayhem, seamless or otherwise. Melded into the reinvented mythology that constitutes a lot of WW’s backstory is an advocacy for peace. It doesn’t take much screen time and it’s played gently – this isn’t the kind of story that grabs you by the lapels, shakes you and snarls listen to me! But the message is there and it’s one that seldom encountered in mega-entertainments. War is not glorious. Violence is a last resort.

In the movie, WW’s sister warriors learn combat skills only to be able to protect themselves and their home from invasion. World War I is raging in Europe and we see enough of it to demonstrate that the Amazons’ fears are justified. WW is horrified at the carnage – the slaughter of innocents – and that’s why she gets involved. But we are given no reason to believe that she enjoys any of it.

I don’t know if WW’s pacific sentiments are registering with the popcorn crowd.

It’s not an easy sell, this peace stuff, not in a country whose president crows that we must win more wars if America is to be great. (The president adds “again” to the end of the previous sentence, but I’d rather not do that.) Not that we must strive to end the monstrous cruelty that’s war by deploying troops if absolutely necessary and recalling them as soon as possible. No, our Mr. T wants to win more wars which presumably requires starting new wars.

Let’s be fair. War and its glorification is as old as civilization (older if you count the skirmishes that must have occurred among hunter-gatherers.) It’s that ole debbil evolution again. Our ancestors developed an aptitude for savagery because that enabled them to deal with the perils of their world and, incidentally, allowed their descendants to become big cheeses. (Take a bow, you and I.) And much of our earliest narrative art deals with soldiers: you know – Odysseus, Achilles, Aeneas. That crowd.

So here we are and that which enabled us to survive now threatens to destroy us. And judging by the news media, nobody seems interested in even acknowledging the existence of options other than creating shiny new hells for our children to enjoy. Maybe someone will think of a way to make peace seem as desirable as war.