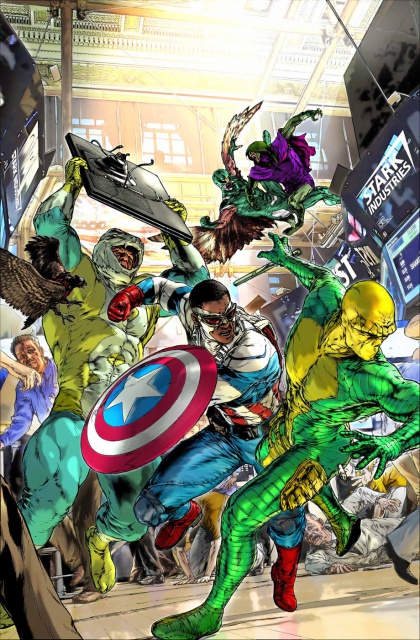 FOR SERPENT SOLUTIONS, DENIAL IS JUST A RIVER IN AFRICA

So, in Captain America: Sam Wilson #4, this happened: Serpent Solutions…

Wait, I guess some of it happened before Captain America: Sam Wilson #4. So, Sherman, set the WABAC for wayer bac.

Once upon a time there was a team of super villains called the Serpent Squad. As its name implies, it was a team whose costumes and powers emulated snakes. Then in Captain America v1 #311, the Serpent Squad turned into a more formal organization. No, they didn’t start wearing scaly tuxes, they unionized. The Serpent Society members still committed crimes, but they gave the proceeds of those crimes to the Society. The Society funded itself from those proceeds and paid its members a regular wage and health benefits. (And this was years before Obamacare. Talk about forward thinking.)

Remember last week when I wrote about how the Sons of the Serpents were kidnapping undocumented immigrants in Arizona and selling them to Dr. Karlin Malus for genetic research? That was Serpent Solution’s latest business venture. Turns out Serpent Solutions were the people employing Malus. Serpent Solutions used him to create new genetic patents, which they then sold to the businesses that wanted these patents.

In the case of Serpent Solutions’s business clients, the plausible deniability came from the fact that the companies that hired Serpent Solutions could say, “Hey, all we did was buy some patents from those guys. We had no idea how they got those patents.”

See, plausible deniability. Except, I do not think the word means what the companies think it means. No not the word deniability. The word plausible.

The whole concept of plausible deniability relies on the fact that no one can find a connection linking the senior officials to the people hired to do the dirty work. No connection means no proof that the top brass really knew what was going on. The morons who hired Serpent Solutions had deniability that was about as plausible as a politician’s promise.

First, the companies were dealing with a group of super villains. How did those companies think the super villains were going to do that dirty work, if not by super villainy? The fact that your company’s hiring a bunch of “usual suspects” makes your deniability a little suspect.

In the one board meeting we were shown, the Senior Vice President for Public Relations and Community Affairs – we’ll call him Greg, because that’s what the story called him – complained that Serpent Solutions’s methods included, “kidnapping! Illegal experiments! Torture and murder!” So it’s not like the Board didn’t know precisely what was going on. Then when Greg demurred and even quit his cushy job, Serpent Solutions killed him right there in the board room, while Viper monologued, “I’ve done a lot of these meetings over the past few months and there’s always one.”

Newsflash, if you want your deniability to be plausible, don’t have your entire board of directors meet the super villains you want to do your dirty work in your frelling board room. Like I said earlier, have some subordinate meet them in seclusion. Hey, I’m just a lowly former public defender from Cleveland not a highly paid and even more-highly bonused corporate CEO, and even I know how to commit corporate malfeasance better than that.

See, the minutes of board meetings are supposed to be recorded, which kind of leaves a paper trail disproving the whole deniability thing. If they aren’t, or are mysteriously destroyed, well that’s going to raise a red flag or two, too. And you’ll be needing that tutu when you try to dance around your own criminal culpability in the matter.

Yes, criminal culpability. Hire criminals to do your criminal dirty work for you and you’re an aider and abettor so just as guilty of their crimes as they are.

And here’s even flashier, newsflash: it helps the whole deniability thing of you don’t have the super villains you want doing your dirty work committing actual murders in your board room with your board of directors present.

Former President Richard Nixon denied involvement in the Watergate break in and cover up. People doubted his denials. But Nixon’s veracity has been suspect as far back as 1950, when he ran for the Senate and people named him “Tricky Dick,” because of alleged falsehoods in campaign ads. But those veracity problems paled next to Nixon’s Watergate denials. As more facts came out, Nixon’s Watergate denials were even less plausible. Finally, when all was said and done, so was President Nixon. Because he didn’t have plausible deniability.

But as much as “Tricky Dick’s” denials strained plausibility, he’d be a paragon of truth, justice, and the American way compared to any board of directors that hired Serpent Solutions to do its dirty work. Their denials would stretch plausibility like petite pantyhose on Honey Boo Boo’s “Mama June.”