Mindy Newell: The Adventure Will Continue 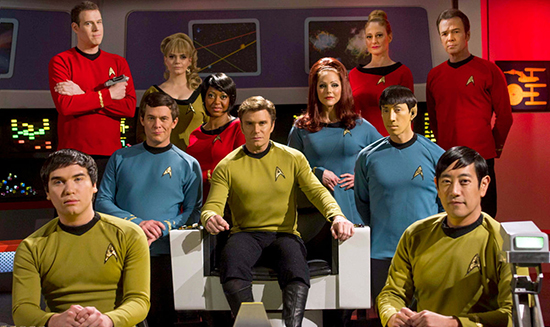 I don’t know about you, but I keep forgetting to watch Star Trek: Discovery.

I don’t know about you, but I couldn’t wait for each episode of Star Trek Continues. 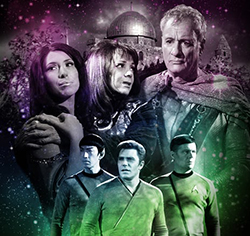 As I’m sure you know, CBS, through the complicated Hollywood system of it’s mine, it’s mine!, owns the television rights to Trek and in its infinite wisdom stupidity decided to launch Discovery on their streaming network. Which you have to pay for.

Star Trek Continues, a continuation of the five-year mission of the Constellation class starship USS Enterprise NCC-1701, captained by James Tiberius Kirk, is a love-fast to the original series. It is available for free on YouTube and its own website.

STC was co-produced by the non-profit charity Trek Continues, Inc., Dracogen, Far From Home LLC and Farragut Films, and was partially funded by Kickstarter, in an incredibly successful campaign of crowd sourcing. Nobody got a salary, and all the money went into the production itself. And it showed; everything, down to the buttons on the bridge consoles, was exactly the same as we remembered – 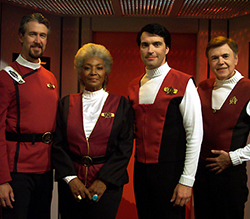 Star Trek Continues also featured many alumni of the original series, notably Michael Forest reprising his role as Apollo in the very first episode. Bobby Clark, who played the Gorn in TOS’s “Arena” appeared in the third episode. Marina Sirtis was the voice of the Enterprise computer, while over in the Mirror Universe the computer was voiced by Michael Dorn. John de Lancie, the irrepressible “Q” on The Next Generation, Deep Space 9, and Voyager, guest-starred in episode nine. And in a “timey-winey wibbly-wobbly” twist, Rekha Sharma, the court-martialed Commander Landry in Star Trek: Discovery, acted in episode eight. Many more veterans of Star Trek, both in front of and behind the camera, and of the movies and web games, also appeared in the series.

The stories encapsulated the heart of Star Trek, that magic something that has kept the series flourishing, in all its many forms, over the decades.

Until, that is, Discovery. Though I’m positive that everyone working on that series is in it with all their heart, soul, and mind, I just keep thinking that, for CBS, it’s a nothing more than a cash-grab. 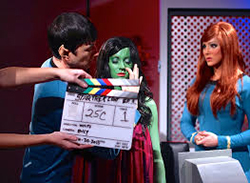 And so, CBS, in its infinite wisdom stupidity, forced Star Trek Continues to shut down. Jealous, much?

Star Trek Continues crossed the “galactic barrier” between the television series’ horrifying and insulting season three conclusion, “Turnabout Intruder” and Star Trek: The Motion Picture. And show runner Vic Mignogna somehow was able to negotiate a fitting, heart-warming, and tear-inducing finale to the five-year mission of the U.S.S. Enterprise NCC-1701 that encompasses everything that made us love Star Trek.

And I know, one way or another, the adventure will continue.

Have you heard Star Trek Continues? I happened to discover it just today, as I was surfing the web this morning. It is an award-winning …well, let me quote from the site itself:

“Star Trek Continues is proud to be part of Trek history, aimed at completing

the final two years of the original five-year mission. After mounting a successful Kickstarter campaign, the show is already making waves and attracting guest stars such as Michael Forest, Jamie Bamber, Lou Ferrigno, and Erin Gray – as well as cameos by Star Trek alums like Marina Sirtis and Michael Dorn.”

It really is absolutely captivating. Mr. Mignogna is perfect – and I mean perfect! – William Shatner as Captain James Tiberius Kirk, down to body movements and personal tics. And Chris Doohan is the living embodiment of Lt. Commander Montgomery Scott, Chief Engineer and Second Officer of the Enterprise. Then again, he should be. Mr. Doohan is the son of the late James Doohan, who, just in case you don’t know, played Scotty in the original series. (Fun fact I discovered on the website: Chris Doohan first boarded the U.S.S. Enterprise NCC1701 in Star Trek: The Motion Picture, and continues to do so, up to and including Star Trek (2009) and Star Trek Into Darkness, in which he appeared in a scene with Simon Pegg, a.k.a. the “new” Scotty.

Everyone is perfect in their roles, costuming, and make-up; except for, I have to say, Kim Stinger as Nichel Nichols as Lt. Nyota Uhura. Her 2014 hairdo and voice and physicality does absolutely nothing to remind me of Ms. Nichols or Lt. Uhura. She is the only one who takes me completely out of the spell, out of my “ suspension of disbelief.” She might as well be a new character.

Still, if you’re a Star Trek fan, you must check this website; all the music and sound effects of the original are incorporated into the series and even the special effects are so seamless and could easily “melt” into any of the episodes on your DVD set.

The reverberations of the attack on Charlie Hebdo continue to dominate the news cycle, even pushing the opening bell of the 2016 Presidential race here in the States to the second or third news story – yeah, here we go again – Rick Santorum, Mike Huckabee, and Mitt Romney (!!!) are all “exploring” the possibility of running – but as I read websites and newspapers and watch the news stations, I’m realizing that it’s about more than the right to free speech. It’s also about the rise of violence against Jews in France over the last decade, coinciding with the rise in the French Muslim population.

The history of French cooperation with the Nazis during World War II (aside from the Free French, who made valuable contributions) does not put that country of the list of “Righteous Gentiles“ at Yad Veshem, the Holocaust memorial in Israel. Historically, France has been the center of European Jewish learning and assimilation into the greater society; after the French Revolution Jews were emancipated, and Napoleon deconstructed the ghettos.

Today the Jewish community in France numbers between 500.000 and 600,000. But over the last few years there has been a huge exodus as increasing anti-Semitism fostered by the French Muslim population has become a palpable threat, with almost 8,000 occurrences since 2000, including one very large and violent event last July in which 200 Jews were trapped inside a synagogue while the demonstrators outside shouted obscenities and threatened death.

This is why the French police and security offices have been protecting Jewish neighborhoods and sites in Paris and around the country since the assault at Charlie Hebdo and the Hyper Cache kosher deli, including schools and synagogues.

*sigh* And the story of Cain and Abel, and Isaac and Ishmael, just keeps on trekkin’.