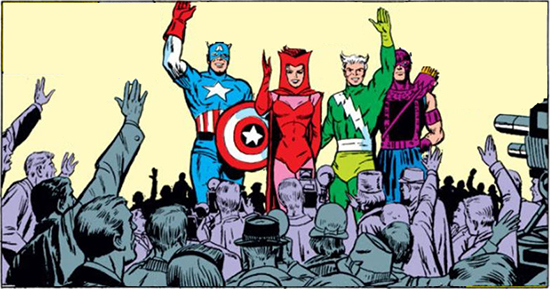 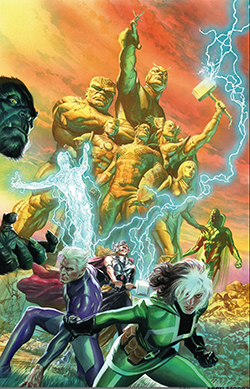 At first glance, this does not sound like a good idea.

U.S. Avengers and Uncanny Avengers will not survive the new year. January brings us a three-month mini-event called Avengers: No Surrender. Okay; on the face of it, this seems like a good idea – and pretty much what I was calling for in this space back on September 6th when I said Secret Empire might have been a worthy eight-parter if it had been entirely confined to the two Captain America titles, segueing from Sam Wilson to Steve Rogers and completely in the hands of writer Nick Spencer. Okay, I guess I’m getting much of what I asked for.

However, Avengers: No Surrender also marks the cancellation of both U.S. Avengers and Uncanny Avengers and the “promotion” of The Avengers to weekly status… at least for the duration of the storyline. There are 13 shipping weeks in the first quarter of 2018, so at the current cover price that means it’ll cost you nearly $52.00 to read the storyline. Plus tax.

Now if you’re like me (which means at some point you made a drastically bad life decision) you do not presently read all three titles. Usually, I only follow The Avengers. No slight against the other two titles – there are only so many hours in the day, and only so much cash in the kitty. Writers Mark Waid, Al Ewing and Jim Zub, at least, will remain on the weekly title, doubtlessly divvying up the work in some equitable fashion.

Waid, one of the best superhero writers around, is blessed with a wit that is equal to his comics prowess, and he told The Hollywood Reporter No Surrender is “half celebration, half wake.” Well, that sounds half-interesting: it’s been a couple decades since readers would be vested in that “half wake” part.

I am merely expressing a concern; I’m not judging something that I haven’t read – something that, likely, is not yet fully written. No Surrender begs a serious commitment from Marvel’s evidently-dwindling readership. Not all True Believers have that kind of time, money … or desire.

This mini-event begs the question “what happens after?” Will The Avengers remain weekly? Will the title revert to monthly status allowing for the return of U.S. Avengers and The Uncanny Avengers, or will Marvel create two new titles? A year ago, I would have thought resurrecting U.S. Avengers and The Uncanny Avengers with new number ones would be a given, but Marvel has since gone on to eschew such overworked marketing stunts.

But a couple weeks after the alleged conclusion of No Surrender, the world will be lining up for Marvel’s latest and most crowded movie yet… Avengers – Infinity War. History has shown us this is not the time the House of Idea will cut their output of comic books with the word “Avengers” in the title. And with a couple dozen heroes in that movie, it seems unlikely that Marvel will be weeding out capes from the comic book team.

I suspect most comics shop owners will have a hard time deciding how many copies to order. They’re going to have to order at least two-thirds of No Surrender – eight or nine issues – before they find out of their customers will go for the thing. This is not a comfortable position for their retailer base, no matter how frequently they have been put in that position lately.

Let’s hope No Surrender knocks it out of the park.