Tagged: Travel Broadens The Mind Until You Can’t Get Your Head Out the Door

I, Rene Tardi, Prisoner of War in Stalag IIB, Vol. 2: My Return Home by "Tardi" 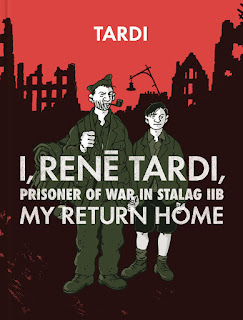 This is, obviously, a sequel. The first volume of Rene Tardi’s WWII war memoirs, as interpreted, reimagined, and made into a graphic novel by his son Jacques, was published in French in 2012 and English in 2018. That one covered the bulk of the war: how Rene got into it, his capture and transfer far to the east to Stalag IIB, and the life of the camp through the end of 1944. (See my post on that book for more.)

My Return Home  picks up the story from there: the first page has the POWs on the march, having already been herded out of the stalag by their posten (guards). It’s late January in Northern Poland — well, what is now Northern Poland; it was conquered Nazi territory then, part of the crumbling dreams of the greater Reich. Jacques begins deeply in medias res, giving no explanations for potential new readers. We don’t even get a date for nearly a dozen pages, and if we’ve forgotten that Jacques is drawing his younger self (circa 1958 or so; he was born in 1946 and seems to be a tween here) as an interlocutor and interpreter for Rene’s sketchy notebook account, there will be no relief to our confusion. (That’s the two of them on the cover: Rene from 1945 and Jacques from about 1958. It doesn’t make a whole lot of sense, frankly, but it works as a framing device.)

So: this is the story of a long forced march, of hundreds of French POWs (and some others, I think — Jacques and/or Rene are not particularly clear on the makeup of the POW group), through Poland and northern Germany, for reasons that were not clear to Rene on the ground in 1945 and are no clearer to us now. The posten apparently thought they would be killed by the advancing Russian armies — which is probably entirely true — and perhaps were still dutiful or suspicious enough not to leave hundreds of former combatants, even ones broken down by four years of camp life, in their rear as they fled West. (It probably made sense to them at the time. Some of them likely even made it out to safety and survived the end of the war.)

Rene kept a skeletal diary of the march — names of towns and kilometers on the road for each day, and a few other notes on river crossings and armies seen in the distance and similar events. That diary survived for Jacques to turn it into this book, but the reader has to be amazed at how much work it took for Jacques to go from those quick notes, which we can see on the endpapers, to three wide panels per page, full of landscape and men trudging through that landscape, with events and dialogue and endless marching.

In the end, though, My Return Home is more than a bit of a slog itself. We know Rene made it home, and the march is neither particularly interesting (another night in a random field! backtracking yet again to cross the same river!) nor horrifying (there are some moments, but it looks like nearly all of the POWs survived and only a few of them got up to anything that could be called seriour war crimes [1]). It’s another war story, and war is hell: we know that already. My Return Home is about a hundred and fifty pages of men marching through dull terrain under duress: that’s it.

Jacques’ writing, or perhaps the translation by Jenna Allen, is a bit stilted in spots. Since Jacques’s afterword is stilted, and fond of random exclamation points in the middle of the sentence the same ways, I’m inclined to pin it on him. His art is strong as usual, and his slogging POWs remind me of Mauldin’s soldiers — maybe just due to the era and my American biases.

There is a third volume, which was just published in the US, covering (I think) Rene’s return to Germany as a civilian, years later. But, frankly, it’s looking like there only needed to be one I, Rene Tardi, Prisoner of War in Stalag IIB, and that’s the one when he actually was a prisoner of war in Stalag IIB.

[1] Rene did, as part of revenge against the remaining posten near the end of the march. It’s mildly shocking in the story, but not surprising.