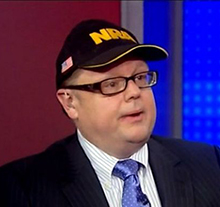 In his complaint, Starnes gripes about a scene in the most recent Action Comics where “Superman comes to the rescue of a group of illegal aliens – under attack from a white guy wearing an American flag bandana and waving around a machine gun… Instead of rounding up the illegals and flying them back to where they came from, the Man of Steel snatches the white guy and with a menacing look snarls, ‘The only person responsible for the blackness smothering your soul – is you.’” 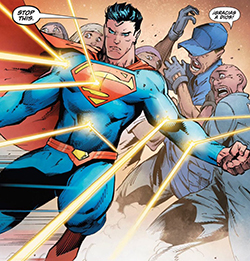 This upset Mr. Starnes no end and has provided me with grist for this week’s column.

I could start by pointing out that the incident is fiction (or fake news) and that Superman is not real but I’ll give Mr. Starnes the benefit of the doubt and assume he already knows that. Although the guy is the host of Fox News and Commentary so maybe one shouldn’t assume. But we will.

Superman stops the assailant from killing these people (the alleged illegals). And this is a bad thing – because? Maybe Mr. Starnes is conflating the First and Second Amendments in the Bill of Rights and suggesting that the use of the machine gun on illegals is an expression of free speech.

This is what Superman does. This is what Superman is supposed to do. Defend people (and they are people) like these. Would it be better if he let them die at the hands of this asshole no matter how good of a reason he thinks he has? That is Superman’s job. Deporting them afterward? He’s not I.C.E. – that’s not his job. He has no legal status to do that any more than I do or Mr. Starnes has.

What I’m really indebted to Mr. Starnes for is his observation “Clark Kent is technically an illegal alien – a native of Krypton.” (Okay, technically Kal-El is the illegal alien.) Supes came to this planet, this country, in a rocket and was found by the Kents in a field who then adopted him. No border guards or checkpoints. No visa. No green card.

Who better to symbolize what an immigrant, legal or otherwise, brings to this country? Kal-El’s strengths, his abilities, his character has immeasurably aided his adopted country. He represents Truth, Justice, and the American Way in all the best senses. He is not a rapist or a drug dealer or a terrorist as some would have us believe. Superman represents the best of immigrants, legal or illegal – and us.

So, thank you, Mr. Starnes, for this timely reminder. The Man of Steel is indeed an illegal alien. We should try to make him the face of the illegals and remember not just his powers and abilities but the fact that he also from small-town America and that Superman is a good man.