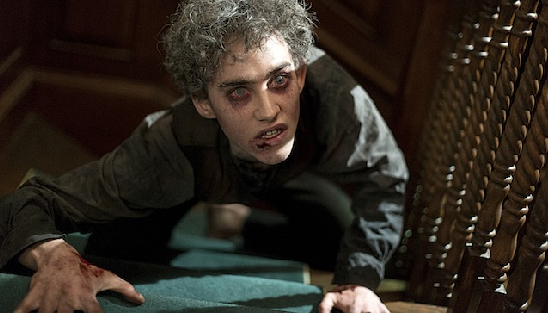 I usually don’t watch horror films or TV shows, and that might surprise some people. After all, I’m known to have written some horror stories, such as DC’s Wasteland. My standard response is that I would rather give nightmares than get them. A bit flip perhaps, but largely true. I have an active imagination (from which I make my living) and the concepts and images from a horror story can stick in my head long after I’ve seen the show.

For example, I went to see The Exorcist when it first hit the movie theaters and, oh my, it played heavily on the atavistic fears of my Roman Catholic altar boy choir boy upbringing. I slept that night with the lights on despite being of college age. Actually, I was in bed but I didn’t sleep that much. Part of me was convinced that the ol’ debbil was gonna git me.

This is an explanation of why I didn’t watch Penny Dreadful when it first showed on Showtime. Recently, however, I got a chance to get caught up with the first two seasons. I didn’t binge watch them; the most I could take was two episodes at a sitting. I found them too unsettling.

The show is set in Victorian London and deals with a number of supernatural threats. A team of sorts is drawn together including an African explorer (Sir Malcolm Murray), his mysterious African servant (Sembene), a witch (Vanessa Ives), an American gunslinger (Ethan Chandler), Dorian Gray (of The Picture of fame) and Doctor Victor Frankenstein and his Creature(s).

If that sounds reminiscent of League of Extraordinary Gentlemen, well, it is… in concept. It is also extraordinarily well done. The show’s creator is John Logan and, I believe, he has also written all the episodes. You may know Mr. Logan from his work on other movies such as Skyfall and the upcoming Spectre, as well as Hugo, Rango (such an odd and interesting film!), and Gladiator among many others. A very talented writer and that talent is in full display here.

The production values are first rate – the sets, the costumes, all the details. Think Downton Abbey with vampires. The cast is also primo – and you have an odd James Bond connection with Timothy Dalton (Bond at one time) playing Sir Malcolm and Eva Green (who was Vesper Lynn in Casino Royale) joining John Logan. Harry Treadway, who plays Dr. Frankenstein, was also in the TV mini-series about Bond’s creator, Fleming.

Josh Hartnet portrays Ethan Chandler, the American gunslinger with a dark and secret past. Despite that past, the character is one of the most decent persons in the show. Sembene is portrayed by Danny Sapani who shares a Doctor Who connection with Billie Piper (Brona, Lily) who, of course, was Rose Tyler on Doctor Who. (Yes, I’m nerding out.) You see quite a bit more of Ms. Piper here. Quite a bit more.

I don’t know Reeve Carney who appears as Dorian Gray, but he’s very effective in a very unsettling role.

My favorite character, however, is Frankenstein’s Creature, played by Rory Kinnear (another Bond connection – he’s been Tanner in the last few Bond films). He is a monster, yes – he can be brutal and murderous and full of rage. He is also the most heart-breaking character in the show. He knows what he is and, by his very appearance, knows that he has no place where he fits in. He suffers most from ordinary humans (who can be the biggest monsters in the show). His longing, his despair, his rage all make him, as one character says of him late in the second series, the most human of them all.

The reason I like the show so much is the characterization. All the characters have multiple levels and all are flawed. My own theory is that you can’t really experience horror unless, on some level, you sympathize with the characters. If you don’t feel something for them, you won’t feel anything for what happens to them. You can be shocked, yes, but you don’t really feel anything. What is the point if you don’t feel? Horror is something that happens to people that we know. There can be sensation, sure, but if you don’t identify with those going through the horror, it means nothing. It’s just incident.

I should probably also mention that there is violence and sex and nudity (both male and female, although mostly female); this is pay-cable TV, after all. If any of that might bother you, give the show a wide berth. None of it ever seems gratuitous to me. I should also mention that the second season is even more unnerving than the first. A third season is projected for next year and I approach it with both anticipation and dread.

I realize that I’m late coming to the Penny Dreadful party but I think the show can be streamed and certainly it’s available on DVD and Blu-Ray so I feel justified in recommending it which I do most heartily. If I was writing horror for TV, this is the type of story I would like to tell.

I’ve had a chance recently to catch some, not all, of Showtime’s series, Penny Dreadful, and I’ve enjoyed it quite a bit. It takes the same concept of Alan Moore’s League of Extraordinary Gentlemen (combine genre characters from the Victorian Age into a single story) and uses it with mostly horror and supernatural characters and elements, again in Victorian London.

The “real” penny dreadfuls were the pulp fiction of their day, precursors to the pulp magazines and also comics. The TV series was created by John Logan (who, among other things, wrote Skyfall and will be writing the next two James Bond films as well) and is the co-executive producer along with James Bond director Sam Mendes (he also directed The Road to Perdition).

There are also other Bond connections, including Timothy Dalton as the African explorer Sir Malcolm Murray, who is the father of Mina Murray, who just happens to be a character in the novel Dracula. Eva Green, who was the “Bond Girl” Vesper Lynd in Casino Royale, plays Vanessa Ives, a medium and possibly a witch. Among interest to we pop culture geeks would also be Doctor Who’s companion Billie Piper as a prostitute with a possibly very dark future.

The show also features Victor Frankenstein and his creature(s) as well as Dorian Gray and a werewolf. To say more would spoil the story for those who have not yet experienced it. The show is well acted, well directed, well written and with first class production values. First class altogether as well as being suspenseful, creepy, and shocking.

What I like most about the show is the complexity of the characters. No one is wholly admirable nor wholly despicable. One of my favorite characters is Frankenstein’s Creature, who sometimes goes by the name Caliban; he is tragic and sympathetic and dangerous all at the same time. You learn things about all the characters and you’re not sure you should root for them – but you do.

All of which really leads up to the true topic of this week’s column – creating complex characters. It is both easy and difficult. It falls back to one of my cardinal rules – we write what we know, especially about people and life as we have experienced them.

What defines a given character is what they want and what they are willing to do to get what they want. By want, I mean really want – not just sorta kinda want. What do they need, what do they desire, what do they lust for, what must they have? Something primal. The more intense the want (the motivation), the better it will drive the story. The reader must not only know what the character wants, they have to feel it. They must feel the desire behind it.

What prevents the character from getting what they want (at least initially) is what makes the story. That’s the conflict. How the character copes with that conflict reveals what their true character is. Same as in life. If the need were easy to satisfy, the story would be quickly over.

Sometimes the conflict is with a person (the antagonist), sometimes an object (a mountain), sometimes a situation (a hurricane, for example). Think of your own life. What is most likely to keep you from getting what you want? As often as not, the answer is you yourself. You have doubts or fears but what is most likely to get in your way is a competing need. You want A but you want B as well and they are mutually exclusive. However, your inner child wants both. That conflict has to be resolved for the story to reach its climax. What we choose, what the character chooses, tell us and tells the reader who the character truly is.

Character exists within opposites. Never try to explain them away. Make the reader feel both desires and identify with both. State them, dramatize them, play with them before you resolve them.

Keep in mind that there may be more than two conflicting wants; in life, we may have dozens. Not all of them have to be resolved; only the main ones. Also keep in mind that it is not only your protagonist that has these conflicting needs; all your characters should. It should be true in your stories because it is true in life; it’s never simple, it’s never easy, it’s never neat and that is what makes it fascinating. Conflict is not just external; it’s internal. Apply what you know to the characters you write.