Suddenly, the air was full of bats!

The “air” here is metaphorical and if you’d allow me to fully ripen the trope, possibly to the point where it emits a faint odor, it might read, The air of popular culture in the 30s and 40s was full of bats.

Let’s see.  There was a Mary Roberts Rheinhart novel and an early talkie adapted from it, both called The Bat, and there was a pulp hero also called The Bat and, a bit later, another pulp do-gooder who labeled himself The Black Bat.  Am I forgetting anyone…?  Oh yeah.  A comic book character that was introduced in Detective Comics #27, dated May 1939, as Batman.  Like an estimated eighty percent of your fellow earthlings, you may have heard of him.

And, again metaphorically, standing behind the Batman and maybe some of the others was one of the greatest pulp heroes, The Shadow.  The writer of the early Batman stories, Bill Finger, made no secret of his admiration for the Shadow novels.  He went so far as to admit that the Shadow’s influence on his batwork was extremely direct when he told historian (and author and artist and publisher) Jim Steranko, “I patterned my style of writing Batman after the Shadow.”  And: “My first script was a take-off on a Shadow story.”

Which brings us to Anthony Tollin.  Remember him?  I introduced the two of you a couple of weeks ago in this very feature. I told you that a company Anthony owns has been issuing reprints of the Shadow books. Recently, he sent me an early copy of one of those books, titled Partners of Peril, and suggested that I might want to compare it to the first Batman adventure, The Case of the Chemical Syndicate.

Of course there are differences.  After all, the Shadow novel is probably around 50,000 words long and Batman’s debut is six comic book pages.  But there are also similarities.  I won’t even try to describe them all – see Robert Greenberger’s ComicMix article, or Anthony’s text piece in the book itself – but they are manifold.  In a phone conversation a few hours ago, Anthony mentioned the most obvious, among which are:

As I wrote in the earlier column, anyone with even the dimmest interest in pop culture or comics history, or who just wants to sample the kind of entertainment that kept pops or granddad reading by flashlight under the covers, or who’s just in the mood for capital-M Melodrama combined with capital-H Heroics, might want to see if the Shadow has anything for them.

For me, the stuff has another aspect, one which is as modern as hip-hop. But that’s for next week.

Okay, okay, I’m sorry. I know I promised, at least implicitly, to deliver Who Knows What Evil Lurks – Part 2 this week. But that will take some time and maybe digging, to write and, honestly, I have the luxury of neither. By the time you read this, I’ll either be at or returning from Juaniata, Pennsylvania, where I’ve been invited to be the guest of Jay Hosler and maybe shoot off my mouth in public a bit. I’ve been busy doodling notes for said mouth-shooting; hence no dissertation on lurking evil.

I thought about just blowing off this whole column thing, or delaying it until I was back here in scenic Upper Nyack, and rested. But… I promised editor Mike Gold and PR goddess Martha Thomases that I would deliver a minimum of 500 words each and every week. And I made the same promise to myself. Sternly, I said to myself that I had to respect the deadline, even if the deadline in question is largely of my own making.

By the way, I don’t hate deadlines the way a lot of writers and artists seem to. Maybe that’s just because I lived with them for so long – for over 40 years, they were a constant part of my life. What can be said against them is that they can be a pain in the ass. What can be said for them is that they can impart focus to a project and they can be an impetus to stop kvetching and worrying about your ability to leave civilization breathlessly in your debt (and maybe sit on David Letterman’s couch) and just, please, get the damn thing done.

A couple of paragraphs back – I’ll wait while you check – I mentioned Jay Hosler. Doctor Hosler teaches biology at Juaniata College, is a proponent of evolution, a comics enthusiast, a writer, and a cartoonist. He’s done two graphic novels which I found educational and very entertaining. You’ll find the titles below.

END_OF_DOCUMENT_TOKEN_TO_BE_REPLACED 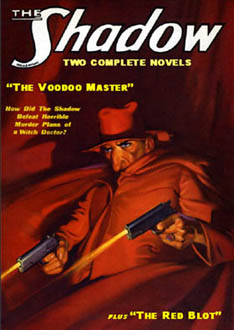 I did, more than 30 years ago, at DC Comics. Anthony was tall, friendly, didn’t look like a New Yorker, and wasn’t. He came to Manhattan from Minneapolis in 1973, worked a couple of jobs, and then landed at DC, where he stayed for 20 years, proofreading, color-coordinating, helping Jack Adler manage the production department – necessary chores, done well away from the spotlight, that transform the raw materials of artwork and script into a printed artifact. Along the way, Anthony got married, and divorced, moved to another state, and when he retired from DC, settled in Texas, where he lives and single-parents his lovely and gifted daughter, Katrina.

If you talked to Anthony much, you soon discovered that he had a number of pop cultch enthusiasms, not the least of which was comic books. But his real passions – I don’t think the word is too strong – were always The Shadow novels, mostly written by Walter Gibson under the pseudonym Maxwell Grant and published in the 30s and 40s in the pulp magazine format, and old radio shows, particularly the crime and adventure programs that were the first cousins of the pulps and comics. If ever I had a question about either of these subjects, Mr. Tollin was always my first go-to guy. I never needed a second.

Those passions are still part of the Tollin gestalt, and now he’s found a new way to both share and make a living from at least one of them. Since July, a company Anthony started has, in partnership with something called Nostalgia Ventures, been issuing reprints of The Shadow books. The price is $12.95, quite modest considering that in one volume you get two novels and reprints of the original illustrations, a feature that’s both unusual and, I think, a real value-adder. The book that’s on the desk next to my computer would certainly be mistaken for one of the old pulps – same size, same kind of cover and font – until you picked it up and found that, in fact, both the cover stock and the interior stock are considerably better than anything that bore the original work. Inside, there are the novels, plus a couple of pieces by Will Murray, another expert and go-to guy, and an adaption of a Shadow radio show.

And as a comics fan you should care… why?