Michael Davis: “Hudlin, We Have A Problem” 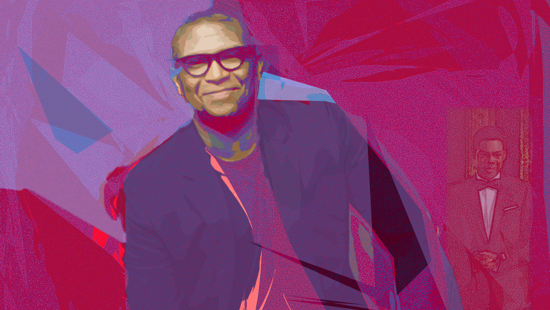 I have a serious problem with Reggie Hudlin. I’ve known Reggie for over 25 years and although we’ve never been the best of friends, I liked Reggie and considered him a friend. Denys Cowan introduced me to Reggie when he took me to a party at Reggie’s downtown New York loft all those years ago. The loft was badass but when asked by this incredible looking woman “Isn’t this the nicest living space you’ve ever been in?” I said, “Nope, my cousin has a nicer loft, but this is cool also.” “Yeah, sure he does. Where in the projects?” was her reply.

She assumed my cousin was named Ray Ray and lived in the hood, in reality my cousin is William T. Williams, one of the most important artists in the 20th and now 21st Century. Don’t take my word for it that’s according to the Janson History of Art the definitive art history reference book and acknowledged authority on the subject.

In looking over my journal entry from that night I wrote the woman (now a fairly well known actress) was rather chilly towards me the rest of the evening. Maybe what I said got back to Reggie and when you’re riding high as a new hotshot director in your 20s that sort of shit brothers you. Perhaps that’s what’s prevented me from ever becoming real tight with Reggie, he heard his loft wasn’t the nicest living space I’ve ever been in.

Reggie was riding high after the massive success of his first movie, House Party. I couldn’t wait to tell him how much I was enjoying his house party two, get it? I thought I would get my chance when the circle of worshipers around him cleared for a moment and I said:

“Hi, thanks for having me. I’m really enjoying this House Party tw…”

“Excuse me. This isn’t the nicest living space you’ve ever been in?” Reggie interrupted.

“EXCUSE ME, I’M TALKING! You said your cousin Ray Ray has a nicer living space?”

“I never said his name was Ray R…”

“EXCUSE ME, I’M STILL TALKING! How dare you not agree, this is the nicest living space you’ve ever been in!” Reggie then withdrew a small caliber gun and shot me.

Or more likely that’s my over imaginative imagination running a way with me. Except for the woman becoming a bit cold towards me because of my answer, none of that happened.

At the same party I met Reggie’s producer-brother Warrington. Warrington and I got alone well.

So well in fact when I purchased my first loft Warrington was one of my first guests.

Nowadays I seldom see Warrington but my relationship with Reggie has been constant. I’ve arranged events at San Diego Comic Con International (SDCC) the New York Comic Con as well as introduced opportunities and people to Reggie all with the goal of supporting whatever he was doing.

Reggie Hudlin is an important Playa within black arts culture. His contributions on the film side are legendary both as a producer and director. His comic book work although respectable was not on the same level as his film and television work.

But it’s about to be.

On January 21 2015 Reggie Hudlin, Denys Cowan, Derek Dingle changed the world of comics when Milestone 2.0 was announced. Reggie is now at the head of the most recognized African American name in comics, Milestone Media. Flanked by Milestone’s creator Denys Cowan and Milestone’s keeper for the last 20 plus years Derek Dingle it’s hard to see how this could be anything other than ground shaking. The addition of Jim Owlsey on any level makes Milestone’s potential almost scary.

Reggie is also producing The Academy Awards. The very same Academy Awards being boycotted by some serious people and the boycott has gained worldwide support. Reggie and host Chris Rock are under real pressure to quit.

It would be so easy to join that chorus. Reggie and Milestone, as Desi would say, still got some ‘plaining’ to do. It’s been a solid year since I was ignored and still not a word as to why. I’ve got more reasons to hope Reggie and Milestone fail than Trump has hoping his supporters never learn to read or write.

A dear friend of mind sent the following text:

Your boy is in the middle of some real serious 1965 shit. What did you do? Payback’s a motherfucking Bitch! LOL!

What did I do? I sat down to write what will surly get me some more haters.

The Academy Awards is 95% plus white, that’s the running narrative in the press. The insinuation is the academy is racist because of that. Is it? The part missing from those reports is the Academy is made up of mostly people working in the industry. You would think that’s general knowledge it’s not, far from it.

Many people think The Academy Of Motion Pictures Arts and Sciences are like the Guardians of the Universe.

That’s the universe, not the galaxy.

From Wikipedia: The Guardians (of the Universe) evolved on the planet Maltus, and were among the first intelligent life forms in the universe. At this time they were tall greyish blue humanoids with black hair, who roughly resembled humans except for their skin color. They became scientists and thinkers, experimenting on the worlds around them.

Many think the Academy spawned from such a (albeit not so comic book) myth. No, the members of the Academy are mostly working professionals in Hollywood. That’s important and here’s why-If you’re an Academy member and you’re worked on a nominated film would that not be the film you vote for? If your film wins you now have an Oscar winning film on your resume. Put another way, how do you not vote for your film?

That alone seems like a screwed up way to conduct a fair vote.

The following is from the Producers requirements for membership into the Academy:

That segment of the industry has a voice that carries beyond any award ceremony. You’re hearing that voice now. If you listen carefully you’ll also hear the voice of comics demanding respect from Hollywood for all we’ve done for them…nah, you won’t but that’s another story.

Is the exclusion of people of color racist or self-serving? The answer most likely lays somewhere in the middle. I’d say; having run some entertainment divisions its more the latter than the former but clearly each exists. Regardless if it’s one, the other or both it’s unfair and something drastic has to be done.

Yeah, like Chris Rock says, I said it. A billion-person audience is exactly what the world needs to see just how people of color roll. African American culture is the world’s culture. There is no bigger influence in pop culture than us.

Reggie and Chris are well equipped to carry that message. That message can’t be subtle, understated, indirect, or delicate. That message must be brash and filled with swagger. Our intelligence and confidence must be painfully obvious as is our talent. A billion people and then some should have no doubt that we are indeed all that a bag of chips.

To that end, once successful in conveying that message we must then turn inward and tend to our own house. Even if for the boycott don’t throw insult at those who are opposed.

If opposed don’t belittle those who disagree. A disagreement is no reason to treat someone badly. An opinion is no reason to dismiss someone’s contribution. Telling yourself there are no common ground then acting on a decision without talking to the other party is one of the ways African Americans have been marginalized in America.

We should know better than to do this to ourselves. But there’s always a few or as Forrest Gump says, “Stupid is what stupid does.” I’ve said before, I support Milestone and I now support Reggie’s and Chris’s decision to stay the course with the Oscars.

Yes, it would be easy and some would say warranted to go the other way. But I’m not now nor have I ever been that guy. I can’t disregard everything someone does because I disagree with some things. That’s the current state of our two political parties.

How’s that working out for us?