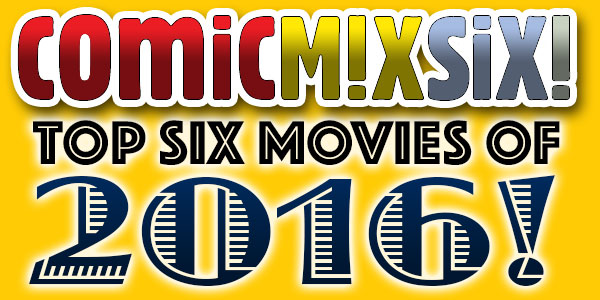 6. Captain America: Civil War – There are so many fantastic moments in Civil War.  The easy one is the fight at the airport where we finally get that big super hero battle we’ve seen in a thousand different comic books (and acted out with action figures at least that many times) put on the silver screen in all its glory.  The three-way fight at the end might be even better because it’s a crisp action beat full of emotion that is rare anywhere these days, and is honestly pretty uncommon even in print.  It’s not a perfect movie, but it might be the perfect application of fan service.  Every other Marvel movie has to either top this in terms of fan service (and they honestly probably shouldn’t try) or do something new and exciting.  The gauntlet has been thrown down (this is not an Infinity Gauntlet pun I swear).

5. Moana – This is the pick I am most concerned is recency bias messing with me.  I saw Moana recently, and while it completely delighted me, I’m concerned in a few years time I’ll look back at this pick and think it should have been The Accountant or Kubo and the Two Strings or really anything else.  I loved Moana, it’s a sweet movie with a good heart, a great set of characters, and a soundtrack that I can’t stop humming to myself.  When we spend the next two months marching towards the Oscars falling over ourselves to talk about what a historical accomplishment La La Land is, I hope people remember it wasn’t even the best musical released within two weeks of its release date.

4. Rogue One – This might seem a little high for a movie I reviewed two weeks ago and was kind of hard on but while it was easy to harp on the stuff that didn’t quite work I’m still quite fond of the stuff that did.  Rogue One brings a bunch of new stuff to the action vocabulary of the franchise and while it might not have wowed us as an independent sci-fi film, as a Star Wars film it feels like a revelation.  There’s an honest-to-goodness war happening in Rogue One for the first time in eight movies with “War” in the title.  Weak central characters may keep Rogue One from joining the top tier but in a soft year for movies overall a compelling B+ can make the top list.

3. Zootopia – Zootopia is a great movie.  It’s funny, touching, and with a decent bit of intricate noir-inspired plotting for a kids movie.  It is worthy of being a standard bearer in the Disney Revival era and standing next to Frozen and Wreck-it-Ralph.  That would probably be enough to get it on this list but what makes me actually proud is that Disney decided to use their giant influence on the youth of America and make a movie about institutionalized prejudice.  They’ve done “don’t judge a book by its cover” movies before but Zootopia is about how the whole system can be against people because of what they look like and that makes it a more special movie and one that I would be proud to show my own children.

2. The Nice Guys – I did not review The Nice Guys for ComicMix this year (I watched The Angry Birds Movie that week) and it’s rare I go see a new release movie on my own anymore— but for Shane Black I was willing to do it and it was worth it.  The Nice Guys is very funny, certainly the best comedy of the year, but more than that it was so inescapably fun.  That’s a strange thing to say about a movie that is sort of about a string of murders in the seedy world of the 1970s porn industry.  The chemistry between Ryan Gosling and Russell Crowe is delightful— I would watch that pair do seven buddy movies like Bing Crosby and Bob Hope.  I think a premium cable network should commission a junior detective show staring the daughter character.  I want to live in the world of The Nice Guys as much as I can, and that’s such a fantastic thing to get from a movie.

1. Arrival – For the second year in a row my top movie of the year is a non-franchise science fiction film with a third act that’s a little out of left field.  I guess we all have a type.  Arrival is a movie that establishes a high degree of difficulty with its concept and then crafts a simply perfect film to go with it.  It’s tense and thought provoking and beautiful and cripplingly sad.  I went in to Arrival with no idea what I was getting or what to expect and then spent the next three weeks recommending it to literally every person I spoke to.  In 2017 I would consider myself beyond lucky if I saw another movie that completely delights me like Arrival did; I would settle for the new Blade Runner being a passable attempt.