Dennis O’Neil: The Sensation and Me 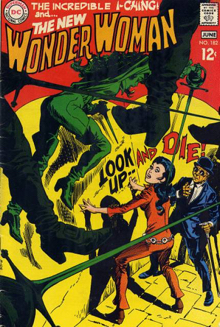 As I sit here, Wonder Woman is wowing ‘em about a mile away to the north, at the Palisades 21-Plex where you can see a movie (or 21 movies?) and then visit the

lots and lots of stores nearby in the five-floor mall and shop until your brain congeals. I guess that if I were a real comics geek I’d be there too because here we are, five days after the flick opened and I have not as yet seen it. Haven’t even seen a preview.

Well, shame is too strong, especially since we plan to see it, and soon, especially if the guy who’s coming to fix the microwave arrives early enough for us to catch a showing. (“Our service provider will call at your home sometime between noon and infinity.”) We won’t have to grit our teeth and force ourselves into the theater, either. We want to see the movie. 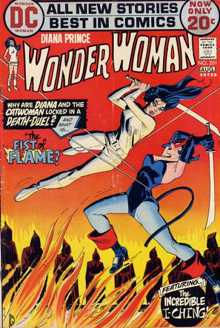 A few reasons: We thought the WW sections of Superman vs Batman were much the best things about it (and if you want to say that I’m damning with faint praise I can’t stop you). Then there’s this: WW and I go way back. I can’t say that I was an avid WW fan when I was taking my first timid steps into comics at about age six, give or take. It’s possible, maybe even probable, that I saw one or two or a few because if it was a comic book, I wanted to read it. But WW didn’t have the staying power in my psyche of… oh, say Batman and Robin. She came and she went.

And I didn’t really meet her again until I was an editor at DC Comics and she was part of my work package. By then I knew that I didn’t much care for her, though I might not have been able to say why. And I fancied myself a feminist. So, weren’t the planets aligning? Wasn’t our girl due for a makeover? Off with the costume and the lasso and the bracelets and especially, ye gods, the invisible plane. Give her a chic jumpsuit. Have her learn martial arts. Make her hip and contemporary.

Ugh. What I didn’t realize, what I didn’t understand, in my male-who-thinks-he’s-a-feminist myopia, was that WW was a symbol of feminine empowerment, the only female character in comics who was the equal, in strength and prowess, of the numerous male heroes. To her female readers, she was unique and, arguably, important and I had dumped qualities that had shaped her identity and, while I was at it, a costume that served as an instantly recognizable icon. Mea culpa.

But my changes didn’t last long. WW reverted to her old self, survived and, if what I read is true, stars in the superhero movie we’ve all been waiting for.