DAREDEVIL IS GIVEN THE FINGER

Truer words were never spoken; or put into a first-person narrative caption.

You may recall that attorney – I mean I hope my old columns are at least a little memorable – Matt Murdock, who is secretly the super hero Daredevil, was recently disbarred in New York state after circumstances forced Matt to reveal publicly that he was Daredevil. When New York realized the number of ethical infractions Matt had committed to keep his secret identity secret, it barred him from its bar. Matt then moved to San Francisco, because he was still a licensed attorney in California. Well, that was then. This is now.

Now, everyone has forgotten that Matt is Daredevil, Matt is back in New York City, and his license to practice law in New York State has been reinstated. Don’t ask how.

Seriously, do not ask how, because I literally do not know. The current run on Daredevil simply dropped us in the middle of Matt’s new life without telling us how it happened. The only No explanation we’ve been given as to how Matt ignored Nat King Cole and proved his secret identity was forgettable is “unspecified circumstances.” Although I think we can safely rule out a deal with the devil though. Marvel tried this trick before; it had Mephisto make everyone forget Peter Parker was Spider-Man in “One More Day.” That bit of Faustian forgetfulness proved so unpopular Marvel retconned the Abaddon amnesia angle out of existence in “One Moment in Time.” (And you know what, don’t ask me about that either!)

All we know is what no one else knows, that Matt is Daredevil, that he can practice law in New York again, that he’s back in New York City, and that he’s working for the New York City District Attorney’s office. Considering Matt’s recent record is rife with a lack of legal ethics, some of us were taking bets on how long it would be before Matt breached legal ethics again.

Well, if you had five issues in the pool, you’re a winner.

For the first four issues of the new Daredevil run, Matt was fighting Tenfingers; a new crime lord in Chinatown who, true to his name, has a double dose of digits on each hand and some magic mojo he stole from the ninja assassin organization, the Hand. (Fingers? Hand? I’m sensing a theme here. I’m amazed we didn’t have guest appearances by Iron Fist or Mitt Romney.)

Anyway, Matt had been fighting Tenfingers in both his identities. Daredevil battled Tenfingers and his underlings in the streets. While ADA Matt tried to assemble a case against Tenfingers so he could be prosecuted. In both endeavors, Matt failed miserably. Not only could he not stop Tenfingers, he couldn’t even get Tenfingers to paws.

Because Matt had such spectacular lack of success, he was demoted from heading up the Tenfingers taskforce to the District Attorney’s E.C.A.B. or Early Case Assessment Bureau; meaning Matt will be spending a lot of time in Night Court. (Yes, the same night court where Harry Stone was a judge, but probably a different court room. Although this being a court room in the Marvel Universe, I’ll bet it has just as many crazies.) 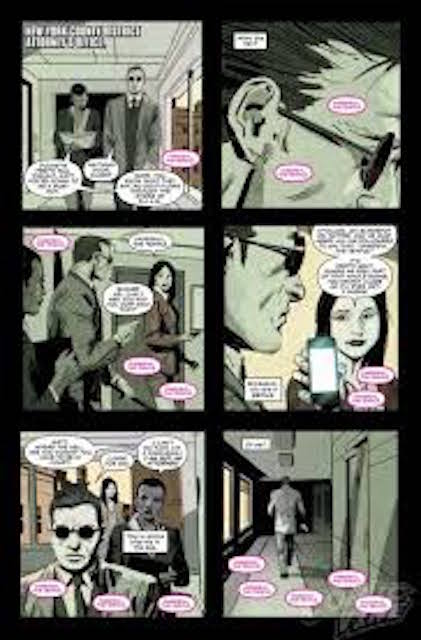 In Daredevil v5 #5, Matt was heading to what was, I think, his first night in night court, when he got an alert that Daredevil should come to the temple in Chinatown where Tenfingers had his headquarters. Matt told his assistant, Ellen King, to cover for him in court. Ellen protested that she was a paralegal, not an attorney. Matt left anyway and narrative captioned those aforementioned truer words, “This is gonna bite me in the ass.”

I see one of three results from Matt’s actions. First, Ellen did the proper thing and told the judge that the attorney who was supposed to be in court skipped out and that she was only a paralegal, so couldn’t proceed. The judge was understandably upset with Matt then continued the court’s docket until either another day or until the DA’s office sent another attorney to cover for Matt. Either way both the judge and District Attorney Ben Hochberg were going to be pissed at Matt for this. (Can I say “pissed here at ComicMix? I guess we’ll find out.)

And I don’t mean a little bit pissed, I mean massively, Matt-gets-fired-and-brought-up-on-disciplinary-charges pissed. Cause in the real world, that’s what would probably happen to an attorney who was just reinstated after being disbarred for ethical violations and who then intentionally skipped a court date and left an unlicensed paralegal to handle his caseload.

The second possibility is that Ellen still did the correct thing and told the judge she couldn’t go forward. The judge then did the incorrect thing and forced Ellen to prosecute the cases in that night’s docket. Unlikely. This possibility would also result in Matt’s being fired and brought up on disciplinary charges, but it would also result in the judge being brought up on disciplinary charges for forcing an unlicensed paralegal to act as an attorney. It would probably also require all of the people who were arraigned that night to be arraigned again, when someone learned that a paralegal was operating as an attorney without a license. So I doubt the judge would do that.

The third possibility is that Ellen did the stupid thing and didn’t tell the judge she was only a paralegal and actually handled Matt’s caseload. This result is also unlikely. It would still result in Matt being disciplined and still force the court to re-arraign everyone who appeared in night court that evening. It would also probably result in Ellen’s being fired. She couldn’t be disbarred, because she wasn’t an attorney, but the DA’s office would fired her and possibly bring her up on criminal charges for practicing law without a license. I don’t see Ellen doing that to herself.

You may have noticed that in all three of my possible scenarios, Matt gets disciplined for skipping out on court and leaving an unlicensed paralegal to cover for him. No matter what the judge and Ellen did, Matt is going to take it on the chin. And considering he’s a super hero, that’s a pretty prominent chin.

So, yeah, I guess you could say it’s gonna bite Matt in the ass. I think it’s going to do a few more things to him, too, but I know I can’t say what those are here in ComicMix.