Emily S. Whitten and the Date with Deadpool 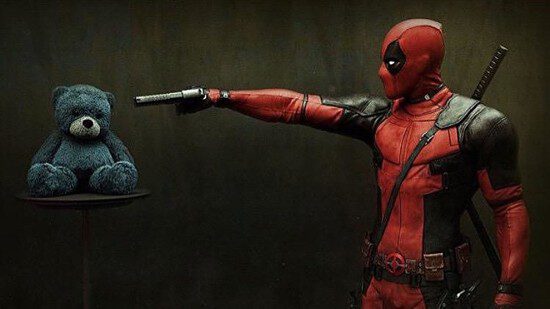 So last night the Deadpool movie marketing folks tricked me into watching The Bachelor’s season premiere by teasing a Deadpool TV spot during the time slot. And the first thing I want to say about it is… twenty seasons, you guys? This show has been on for twenty seasons? Man, our culture’s addiction to reality TV really is sad. As is the lack of dignity inherent in the show’s premise.

That said, it is kind of addictive. I mean, even after the Deadpool slot aired, I couldn’t stop watching. Why? Because, seriously, these Bachelor contestants are quite possibly crazier than Deadpool ever was. I mean, in just one episode as the contestants were introduced we had a dentist wearing a red rose hat that was bigger than her head who then proceeded to actually give the Bachelor (Ben) a mini dental exam right there; a woman wearing a rubber unicorn head that she couldn’t even see out of; a woman who brought along her pet, an actual mini horse (okay, that was kind of awesome) who also swears like Debra Morgan from Dexter; a woman wearing footie pajamas when everyone else was in formal wear because Ben is the “onesie” for her (*sob*); and a woman who thought the best first activity to do with your potential husband was to smash baguettes against a curb like a violent maniac. Because gluten is baaaaad, y’all.

There was also a woman named Tiara (who names their child that?) who I won’t pick on for her job as a “chicken enthusiast” because there’s nothing wrong with people being fond of their pets, right? Even if they’re tiny hamsters. And also because the pictures of her reading and brushing her teeth with her favorite chicken are hilarious. But let’s not forget Lace, who one of the other contestants actually described as “50 Shades of Craaazyyyy!” And she really is, getting drunk on the first show, alternately exhibiting entitlement, disdain, self-confidence, and low self-esteem, and calling Ben out after receiving a rose because she thought he avoided eye contact with her during the rose ceremony on purpose. Good luck with that one, Ben!

As an alternative to The Bachelor, though – have you ever wondered what a date with Deadpool would be like? Where he would take you? What you would eat? Whether he would, in fact, show up wearing nothing but white socks and 312 candy necklaces? After watching The Bachelor and the Deadpool spot, I did; and comics writers have too. Therefore, we know that if you ever dated Deadpool…

Who can say? In other words, dating Deadpool means you’d never have any idea what kind of a day or night you were going to have. And given Deadpool’s unpredictability, I’d probably rather watch A Date With Deadpool than more of The Bachelor, even with the amount of crazy we’ve seen in just one episode. However, since we can’t have that show (maybe someday?), I guess we’ll have to make do with what we’ve got (and, okay, I’ll be honest, I might have to watch another episode of The Bachelor. I kind of want to see what Lace does next. …Damn you, Deadpool marketers and weird tie-ins!).

Here’s hoping next episode a contestant brings along her pet alpaca or something. Until then, Servo Lectio!

With a tagline like “when bad people make good TV”, we have to watch UNREAL when it premieres tonight on Lifetime. Constance Zimmer and Sheri Appleby talk about why this series will blow the cover off of reality TV. Also have you been binging NBC’s AQUARIUS yet? Cast member Grey Damon tells you what you have missed plus how cartooning turned to acting in his life.

We’re back in a couple of days with a look at a new twist on one of pop culture‘s oldest traditions – the horror movie host!

The Point Radio: That Other Funny Poehler

The new NBC comedy, WELCOME TO SWEDEN, has a pretty interesting back story. It was created by Greg Poehler (yep, he’s Amy’s brother) and stars Greg, along with Josephine Bornebusch, in the first new U.S. series to be on both American and Swedish TV. Greg and Josie talk about bridging the cultural comedy gap, plus after 11 years in reality TV, Trista Stutter (THE BACHELORETTE, DANCING WITH THE STARS) has a new project. She joins Gretchen Rossi (REAL HOUSEWIVES OF ORANGE COUNTY) and other reality celebs  in MARRIAGE BOOT CAMP and they both tell us what we can expect on the series.