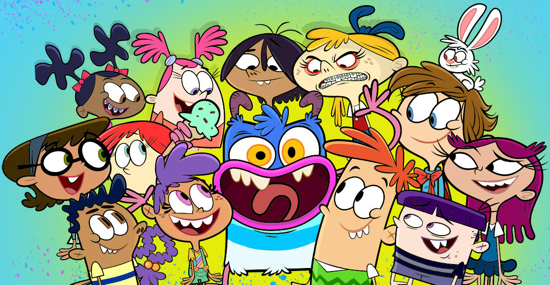 Butch Hartman has a long and storied history of creating great cartoon shows. Not only is he responsible for The Fairly OddParents, the second longest-running Nicktoon on Nickelodeon, but he’s also created several other popular shows including Danny Phantom and T.U.F.F. Puppy. And now here he is once again with a unique new Nickelodeon show, Bunsen is a Beast. 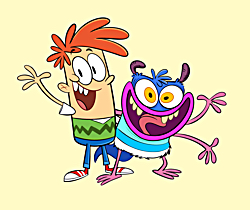 Bunsen is a Beast is a cartoon about Bunsen (voiced by Jeremy Rowley), the first beast to be integrated into the Muckledunk Middle School, and his new human friend Mikey Munroe (Ben Giroux). It also features self-appointed school safety monitor and beast-hater Amanda Killman (Kari Wahlgren) and a collection of other oddball characters such as Ms. Flap (Cheri Oteri) and Darcy, who circle the main pair during their adventures.

But what is a Beast, per se? Well, in Hartman’s creation, even within the Beast world there appears to be great variety, as from the glimpse I got of Bunsen’s mother and other family members during the first episode I watched, the eponymously-named “Bunsen is a Beast,” they appear to have greatly differing features and colors.

Bunsen himself is a square but oddly cute (thanks in part to the voice acting of Rowley) blue and white fur creature, with a tail, numerous limbs that appear as needed, perky puppy-dog ears, and, my favorite, a blowhole on top of his head that explodes in confetti when he’s excited. He’s obviously vastly different from Mikey and the other humans at Muckledunk, but on his first day at school, that doesn’t seem to phase Mikey, who, as the school’s “welcoming committee,” is responsible for showing Bunsen around. Mikey embraces that role, and all adventures, with enthusiasm and little fear or self-consciousness (except around his middle school crush).

In the first episode, Mikey and Bunsen immediately end up neck-deep in adventure, thanks in part to Amanda, a fellow student who thinks beasts are dangerous and is constantly scheming to get rid of Bunsen. In “Bunsen is a Beast,” after Amanda discovers that beets have an unusual effect on beasts and secretly doses Bunsen with beet juice, much excitement ensues due to his reaction to the juice.

The theme of Bunsen’s unusual physiognomy continues in the second episode I watched, “Body and the Beast,” in which Bunsen literally loses his head as he prepares for his first school picture. Along with the general hullabaloo of Mikey trying to help him get it back, this episode included some great humorous character development for the evil Amanda, who is very determined to look her fancy best for picture day, and for new character Darcy, who is both the oddest and most endearing kid on the show so far.

Other upcoming episodes appear to continue the theme of adventures arising due to Bunsen’s general weirdness – and I confess I really want to see the one where Bunsen and Mikey have to save Amanda from “sneeze beasts” that come from Bunsen’s nose; and the one where Bunsen turns into a bee for the spelling bee.

After watching the first two episodes, I had the pleasure of talking with Butch Hartman about how he created the show and what it’s all about. Among other things, he shared that Bunsen is a Beast is “a show about fitting in, and accepting people that are different than you. I don’t really want to pound kids over the head with a big message, but the message is in there. And it’s primarily a comedy show. I really want them just to laugh; that’s what it’s for.”

We had a great and in-depth conversation about his inspiration, how the show was made, and what we can expect to see in upcoming episodes, and you can give the full interview a listen here.

And after that, check out Bunsen is a Beast! The show consists of two episodes per half-hour, premieres at 5:30 p.m. on February 21 on Nickelodeon, and will air at that time through February 23, before moving to its regular time slot of Saturdays at 10:30 a.m. Two episodes of the show are available for preview in advance of the premiere at nick.com, so you can go ahead and give those a watch now!