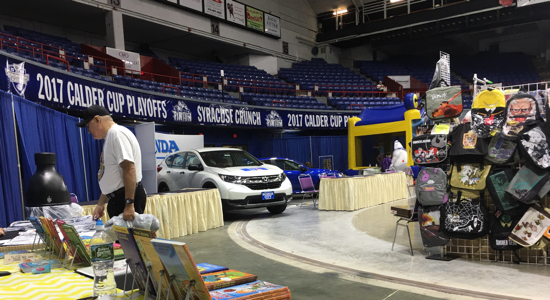 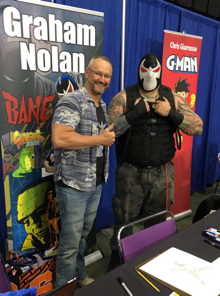 I believe the first comics convention I attended was in 1967. That means I’ve been chasing these puppies for 50 years. Indeed, it often feels my entire life has been one long, never-ending comicon. Talk about getting a life – or, at least, another act.

I continue to do ‘em because I enjoy seeing my friends a hell of a lot more than I enjoy eating vulcanized chicken fingers. Better still, I enjoy meeting the fans, talking about what they like and don’t like (this is not a good time to defend the event comic), discovering new trends and talent, and blathering on and on at panels. For the past, oh, maybe two dozen years that means I’ve vastly preferred the smaller comicons; it’s hard to have meaningful conversations at the overcrowded, underoxygenated megashows such as San Diego and New York. To tell you the truth, I avoid those clusterfucks like the plague because I’m certain someday soon some clown is going to pivot and knock me over with his backpack, and I’m going to have to shoot somebody once again.

So when fellow ComicMixer Ed Catto invited me to the Syracuse show, held last week, I gleefully agreed. It’s only a four-hour drive according to GPS, or five-and-one-half hours according to the weekend reality of Northeast Quadrant motoring. Yes, driving back I encountered no less than three serious accidents and one abandoned SUV that blocked two lanes on the infamous Tappen Zee Bridge. Rule of thumb: during a long drive, when the number of accidents exceeds the number of dead deer, just pull over and cry. 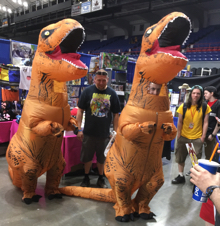 The show was great fun. I was reunited with Graham Nolan, an old friend that I haven’t seen in a million years. We worked on Hawkworld back in the day; his current Bane miniseries is a serious contribution of DC’s present circulation dominance over Marvel Comics. Joe Rubenstein, who has no home and merely travels to different comicons each and every week, had a cold and was hell-bent on turning it into a plague.

I have long enjoyed Chris Giarrusso’s work (G-Man, Mini Marvels, Tales from the Con) and was happy to see he had the table to my immediate right. To my left was Frank Cammuso, writer/artist of such books as Knights of the Lunch Table, Salem Hyde, and one of my all-time favorites, Max Hamm Fairy Tale Detective. Frank had collaborated with my old pal Jay Lynch on several books; as I’ve noted Jayze and I went back to the hallowed days of the Chicago Mirror, which evolved into Bijou Comix. It’s great to make new friends.

Of course, the show was full of innovative cosplayers – to no one’s surprise, virtually every female toddler was adorably swathed in Wonder Woman gear, making Syracuse the cutest place on Earth last weekend. The show was at the city’s convention center, specifically in their hockey arena, home to the AHL’s Syracuse Crunch, the first hockey team to be named after a candy bar. 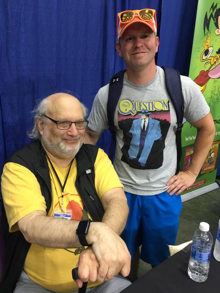 08As is often the case at these “smaller” shows, the fans were wonderful, eager to converse and remarkably polite… “remarkable,” at least, to this New Yorker. Graham and I did a panel about how comics evolved in the 1980s and 90s that was hosted by Ed, and the questions were the sort I enjoy the most: those that initiate conversation among the fans and the panel members.

I’m always curious to see which books are presented to me for autographing (unlike fellow convention attendee Neal Adams, I do not charge for my autographs because, well, the Sharpie I borrowed from Chris would have dried out). This year, it seems almost half were issues of The Question, which I found to be both surprising and really cool. Them folks in Syracuse have taste.

I deeply appreciate Ed’s inviting me and that, at long last, I got the chance to meet and hang out with Kathe Catto, a person as intelligent and as charming as her name is alliterative. I also want to thank convention honcho Thomas Yeldon and the wonderful, helpful and professional staff for a show that was so much fun I forgot that I’ve been doing this since Lyndon Johnson was president.

(With apologies to Jerome J. Garcia, Robert Hall Weir, Philip Lesh, and Robert C. Hunter for the title, and to my ol’ co-conspirator Ed Sanders who purportedly coined the word “clusterfuck.” Remember that when you take your American History class final next year.)