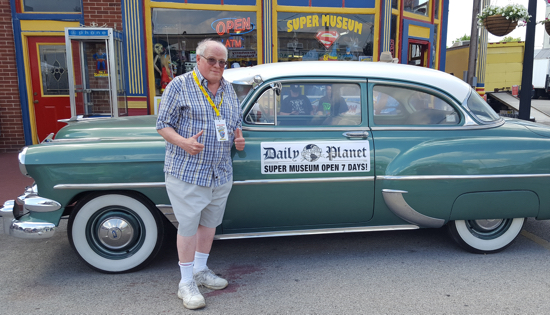 So – where was I last weekend? I was in Metropolis, that’s where, down in the Southern tip of Illinois attending the 39th Annual Superman Celebration. Way back in 1972 the city got DC’s permission to call itself Superman’s home and later that year the Illinois legislature passed a resolution confirming it. By the late 70s, the city decided to capitalize on all this by staging an annual Superman Celebration on the second weekend in June, a festival for the Man of Steel. Damn good idea, I sez.

The Celebration includes media guests connected with Supes. This year it was Margot Kidder, Dean Cain, James Marsters, and Sarah Douglas… as well as a few of us comic book types. I was the featured writer about six years ago and it seems I didn’t burn too many bridges because they had me back again this year along with Jimmy Palmiotti, Amanda Conner, Jim Hall and others.

The Celebration is a hoot and a truly unique Con. It’s one part convention and one part neighborhood block party/street fair. It has carnival rides, scavenger hunts, vintage cars and plenty of food trucks selling every carnival treat you can think of and maybe a few you can’t. Need something fried? Oh, they got that. My mouth waters and my arteries clog at the memory of it.

The town notably has a thirty-foot tall painted bronze statue of Supes in front of the courthouse as well as a smaller bronze statue of Noel Neill who played Lois Lane on The Adventures of Superman. Ms. Neill was a fixture at the Celebration for many years before dying last year but the last time I was there I did get to meet her and, according to reliable witnesses, just geeked out. I’m not ashamed to admit it. Long before I was a pro, I was a fan.

Speaking of fans, they were great. They were warm and eager and so happy to see us. One of the great things about a Con of this size is that you have time to chat with the fans. While there’s plenty of stuff to do, there’s no rush. And some of them geeked out to see me (I’m not sure why) so I told them the stories of my geeking out. We geek bonded.

I also had lots of good conversations with Amanda and Jimmy. I’ve known both of them for a long time but we don’t usually get much chance for long chats. We bumped into each at Chicago’s O’Hare Airport when we gathered for the plane to Paducah which was the closest airport to Metropolis. Amanda is a sweetheart and Jimmy is a character. Real Brooklyn in his speech and attitude and that’s a compliment. Better companions you couldn’t hope to find. 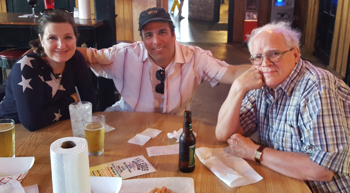 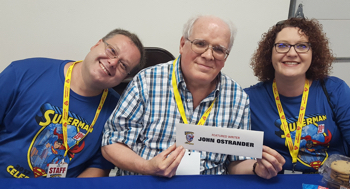 The trip to the Celebration also gave me the chance to renew some old friendships such as Tim and Tracy Brown. We first met some years ago at a Con in Memphis along with a whole bunch of others. Elvis had his Memphis Mafia; they’re part of mine. Tim and I crack each other up with our impressions – I do Elmer Fudd and Ethel Merman and he does Carol Channing. I can make him laugh so hard he squeezes his eyes shut; once I did while Tim was driving the car over the bridge crossing the Ohio River. People were yelling at me to stop but sometimes I just can’t help myself. Despite my best efforts, we got across the bridge safely. If Tim’s wife Traci didn’t gag me I think My Mary did. 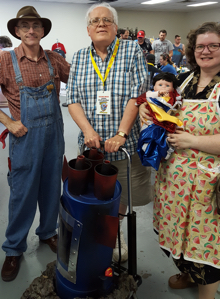 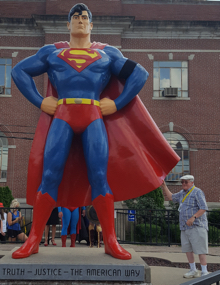 There were some great costumes in the competition (Doctor Octopus was stunning) but the winner was a Wonder Woman and not just because this is her hour. Other people might have had better costumes but she sold it best. If you’re going to be in a costume competition, folks, you gotta walk the walk and talk the talk.

When I was there last, there was a riverboat casino in Metropolis because it wasn’t legal to have one on dry land. Now it is and Harrah’s has a hotel and casino on terra firma. I find that odd but interesting; a city of maybe 7,000 doesn’t have its own airport but has a gambling den. I wandered through it one night on my way to the buffet for dinner and found it completely disorientating. Not my thing but I can see how it might be for someone else.

Next year, Metropolis will celebrate its 40th Celebration and I suspect the hotels are already getting booked up. I understand people come from a long way to be there. It’s unique, a small city in which, for at least one weekend, their major industry is Superman. That’s pretty cool. Thanks to the Celebration’s staff, especially Karla Ogle, for inviting me down and treating us all so well. I’m ready to do it again sometime.