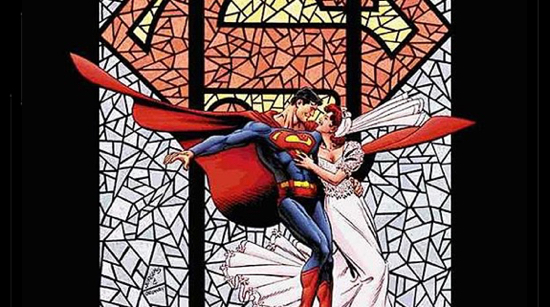 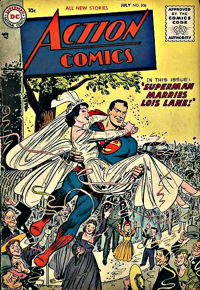 For the last several weeks I’ve been madly reading (and rereading) a huge pile of graphic novels and indie comics sent to me to consider in my capacity as an Eisner Awards judge. Some of these are brilliant and some are just weird (to my eyes), but all of them are at least three months old. Reviewing them here would be lame, because I would be so far behind the curve.

Also, and on another note entirely, there are an awful lot of stories that are skillfully and artfully told but completely uninteresting to me. I don’t know why anyone would want to tell these stories. There are critically acclaimed movies that affect me the same way, and they often win all kinds of awards, so I am clearly missing something.

So let’s talk about something else. Superman and Lois Lane are married again!

More than twenty years ago, I was the publicist at DC who promoted Superman’s wedding. It was really fun. Harry Winston http://www.harrywinston.com/en/engagement-wedding designed the engagement ring. There were the expected number of crude jokes, starting with science-fiction writer Larry Niven’s and working on from there.

The stories after the wedding were very much Superman stories, except now, instead of only talking to Lois at the office, he talked to her at home, too. We saw them waking up in the same bed (which we’d also seen after they got engaged, just like just about every other couple in modern times). We saw them drinking coffee. We saw them juggling work schedules.

I really liked it.

Apparently, a lot of other people didn’t like it. As soon as they could, the powers that be undid the wedding and made Superman single again. They did the same to other characters for fairly specious reasons.

It is a cliché of modern popular entertainment that, in romance, the chase is everything. All the suspense is around “Will they or won’t they?” I get that. It’s one of the fun things about real life, too. Unfortunately, the creative team frequently doesn’t know what happens after. So, inevitably, there is a reboot to make our hero (or heroine) single again. 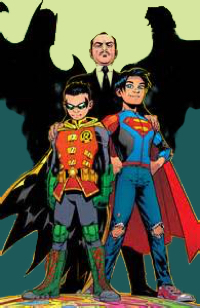 My survey sample might be skewed, but after listening to men and boys talk over many decades, I have the impression that men are more interested in the chase than women are. A guy want to be a man who can bed a large number of women. A woman wants a man who is good enough in the sack to make her want to return.

In any case, the New 52 Superman wasn’t married and, in fact, carried on an affair with Wonder Woman that I, for one, found cringe-worthy. Apparently, I wasn’t alone, and now Superman and Lois Lane have been ret-conned back to the 1990s.

Except now they have a child.

Leaving aside the biological questions about inter-species hybrids (and I have no idea why I expect a scientific explanation, given that the one of the parents can fly and see through walls), I find this a very engaging storyline. It appeals to the part of me that remains seven years old, the one who reads comic books to imagine having powers for myself. Not only did I want to have super-powers, but I wanted my parents to have them, too.

This is a long and convoluted explanation of why I’m enjoying the new Super Sons comic book. Oh, sure, I have quibbles about Batman having a kid, especially one who fights crime before he reaches puberty. Still, the book is a lot of fun, and it feels like writer Peter Tomasi (whom I have always believed is somehow related to me) and artists Jorge Jimenez and Alejandro Sanchez are enjoying themselves.

If you have any seven year olds in your life (spiritually or in reality), you will want to pick up this series. It’s so good, you’ll want to tie a towel around your neck and jump off the sofa.