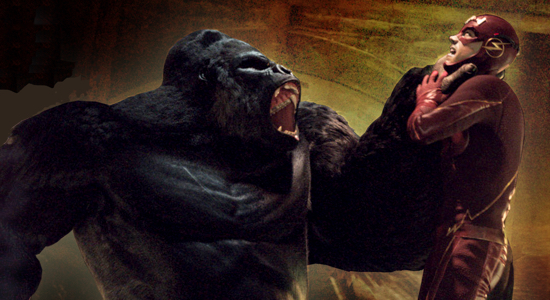 You’ve probably seen the second Superhero Fight Club by now; if you haven’t and you’ve got four minutes to spare, go give this a click. It’s great fun, not necessarly part of The DC-CW continuity, and it brings Supergirl in to play with the boys. And Felicity, of course.

SPOILER ALERT! (I’ve always wanted to say that!) From this point forward, I’m going to write stuff that presumes you’ve seen Superhero Fight Club 2, although as spoilers go, I’ve already spoiled it with my choice of graphics and my headline. Sue me. 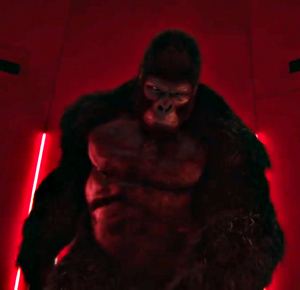 Easily, the coolest part of the short is the “surprise” appearance of Gorilla Grodd, who already has been established in The Flash teevee series. But, let’s face it, Gorilla Grodd usually is the coolest part of damn near everything he’s ever appeared in, dating back to his introduction in early 1959. I’m sure you’re aware of the common belief that, at least in the 1950s and 1960s, putting a gorilla on the cover of a comic book guaranteed higher sales. I’m sure you’re aware of this because I’m one of the wags who has spent the past several decades sharing that observation at every possible opportunity.

Of course I found Grodd amazing at the time of his introduction, in the second issue of the silver-age Flash, #106 (DC Comics didn’t have the auto-renumbering algorithm built into their reboot program way back in 1959). I was eight years old. The fact that John Broome and Carmine Infantino did one hell of a great comic book story helped a lot, and to put it in context Grodd came as a complete surprise to us at the time because he was not cover featured! It was the Pied Piper who on the cover. I realize this flies in the face of the “putting a gorilla on the cover of a comic book guaranteed higher sales” theory, but damn, you open the comic book and there’s this big gorilla frying The Flash with “deadly thought waves.” By the time I got to the Pied Piper story, that villain was – please forgive me – an also-ran.

Editor Julius Schwartz knew he was on to something. He usually was those days, but on page 15 of “The Menace of the Super-Gorilla” he captioned “In the next issue of The Flash – another Super-Gorilla thriller!”

Grodd was not on the cover of that second appearance, either. The cover was all about some guy who could outrun The Flash by running backwards. Where’s the damn super-gorilla?

Right there on page one. On the final story page, Barry Allen is reading the newspaper and hoping he never sees Grodd again. Fat chance, Barry. Julie ratted it out in the last caption, stating the smart ape would return “in a forthcoming issue.”

And there Grodd was. In the very next issue, #108. And, for the third time in three issues, he was not on the cover. After that I’d have an attitude problem too! 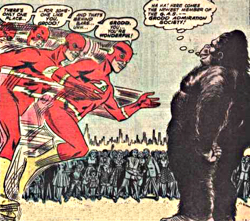 For the record, our great ape didn’t return for another seven issues. The Mirror Master came back in the following issue, and Wally West was introduced in the issue after that. Grodd didn’t make it back into The Flash until #115, September 1960…

… and he wasn’t on the cover of that issue either!

Gorilla Grodd didn’t make it to the cover until #127. By that point, Jay Garrick had been brought back, the Elongated Man, Captain Cold, Captain Boomerang, the Trickster and several other important rogues were introduced, and The Flash clearly was the most exciting comic book on the racks at the time.

Although by then The Flash was in for a run for the money. A few months earlier we saw the debut of the Marvel Universe. The Fantastic Four encountered their first ape villain – three of them, in fact – in 1963.

And they didn’t appear on the cover, either.