You know the old saying: One’s man’s trash is another man’s treasure. That applies to me and my pals so often.

Now, I realize I’m very blessed: I have a great bunch of friends. I share interests and/or a long history with each them. I guess that’s part of the definition of a friend. But we don’t all love the same stuff. And when it comes to Geek Culture, a bunch of my friends just aren’t that into it.

I pity those fools as I flip through the latest PaperGirls.

Freddie P is that type of friend. He’s a long-time pal. We grew up in the same small town, kept in touch through college and lived near another in those wild just-a-few-years-outta-college days. After that, we always stayed in touch. We’ve watched each other’s families grow up. We laughed in good times and were always there in tough times. 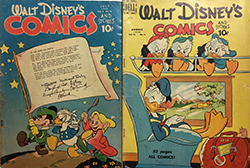 My pal and his effervescent wife, Mare, just came for a visit. We had way too much fun catching up and enjoying some of the local wines and craft brews. I’m now in the Finger Lakes NY region, and this place is just crawling with ‘em.

There was one thing that I didn’t expect. Freddie surprised me by bringing his dad’s stash of comics. He wanted to me to evaluate them, see if they were worth anything.

He carted up three tattered old boxes with about 100 comics. Spoiler Alert: there was no Action Comics #1 in the lot. But there sure were a lot of treasures. As near as we can figure, this collection was cobbled together at different times over the years. Some comics his dad collected and some he would’ve snagged from garage sales. The Freddie P Collection is a nutty, mixed-up combination of wildly different comics.

Some of the wacky highlights include: 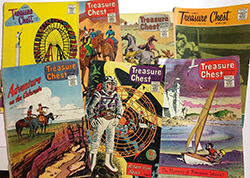 There’s a bunch of gorgeous Walt Disney Comics and Donald Duck Comics in this collection. These stories were reprinted several times, and these particular comics are not from the first run. But they are still pretty old. Most are from the late 40s and early 50s. They are joyous to read and some of the features, like the one-pagers on the inside front covers, make you smile from ear-to-ear.

I really wasn’t that familiar with this anthology series, but I’m glad there were a bunch in the boxes. Treasure Chest is a “wholesome” comic that was distributed in Catholic schools until 1972. Each issue contains an eclectic mix of stories many with non-traditional themes. One issue sports a fantastic Reed Crandall cover. Another features an Eisenhower biography inked and penciled by Joe Sinnott. It’s gorgeous!

Barbarians at the Gate 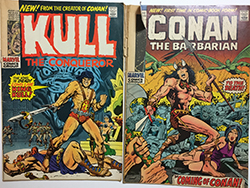 This paragraph may be painful for collectors. There’s a copy of Marvel’s Conan the Barbarian #1 and Kull the Conqueror #1. They are both in pretty good shape, except for the fact the corner boxes of each have been clipped out. Was it a kid making a collage, a trademark lawyer, or a young Joe Jusko preparing for a later-in-life painting series? We may never know the truth. Grrr…

For some reason, there’s a bunch of late 60s issues of Detective Comics (starring Batman and Robin) but not a single issue of Batman. As you may know, both titles were published concurrently since the early days of the industry. What type of kid would buy only Detective Comics but not Batman comics? Another mystery.

There’s even a copy of Detective Comics #414, one of my favorites, which I had written about here.

What’s that you say, Archie? 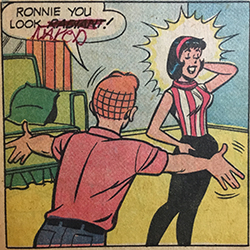 There’s a bunch of Archie comics here, but one in particular really grabbed my attention. One adolescent, probably just learning about sex and sexual terms, had vandalized modified the characters’ word balloons so they are each saying obscene things. It’s childish, tasteless and hilarious. It had me snickering and I just had to read the whole thing.

Two’s Company
Those old Marvel “split books” would force two characters to share one comic. There were some real economic reasons for this, but there’s no denying that each issue is jam-packed with a lot of story! Comparing and contrasting these treasures with so many of today’s comics’ decompressed storytelling, one is amazed by how long it takes to read each comic. This collection contains: Tales of Suspense #96 (starring Captain America and Iron Man), Strange Tales #160 (starring Doctor Strange and Nick Fury, Agent of S.H.I.E.L.D.) and Tales to Astonish #72 (starring Sub-Mariner and The Hulk).

It’s easy to forget how many licensed comics there were on the racks back on the day. The collection included these comics:

and last, but least: 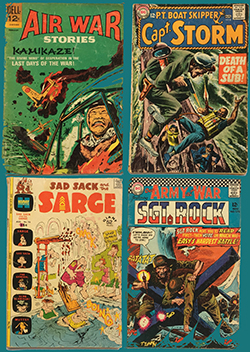 There’s just a smattering of war comics here, but what they offer a fantastic across the board representation of the genre Sgt. Rock, Capt. Storm, Sgt. Fury and the Howling Commandos, Air War stories, Combat and Sad Sack. The covers are particularly compelling – I can see why some kid snagged them all those years ago.

I never loved the Metal Men. Not even those issues with the Walt Simonson art. I kind of learned about these quirky robot heroes via reprints and the occasional Brave and the Bold team-up. So for me it wasn’t a big thrill to stumble across an old copy in this collection. But the weird part is that there are two issues of Metal Men #28 here! Seems like a pretty ordinary Metal Men adventure to me. The Metal Men fight bad guys, and get destroyed, and get rebuilt and then something happens with their responsometers and all the while Platinum, the female Metal Man, gets lovey-dovey with Doc Magnus (which still seems creepy to me). How did one kid in 1967 ever end up with two issue of Metal Men #28?

I’m going to take this collection to the Buffalo Comic Con this weekend (I’m a panelist on the Kirby panel) to find some fans who might treasure these comics. Maybe I’ll find some buyers. Who knows? Freddie P didn’t think these were treasures, but I sure do.

Thanks to Jeff Vaughn his merry band of dedicated and detail-oriented compatriots who publish the Overstreet Comic Book Price Guide. Of course, we all know it’s great for estimating the value of comics. But The Overstreet Guide is indispensable when it comes to understanding the complicated numbering of series like Walt Disney Comics and Treasure Chest. (Full Disclosure: I have contributed articles to the Guide.) 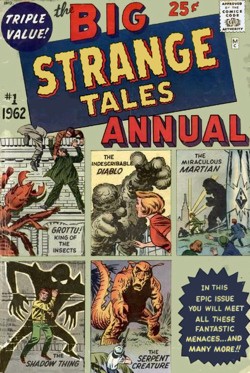 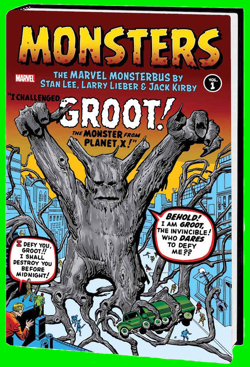