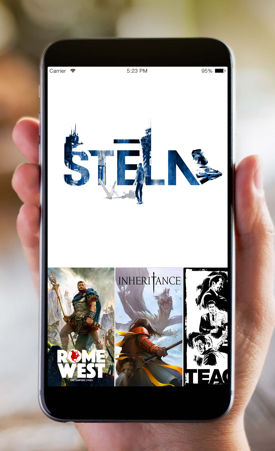 There’s a new digital comics platform on the horizon, and it looks fantastic in its simplicity. The new mobile comics platform, coming to us in early 2016, is called Stela (pronounced “Steela”). It is a both an app and a publisher, being a platform optimized for smartphones that offers exclusive original content by award-winning writers and illustrators, including Evan Dorkin, Sarah Dyer, Joe Casey, Irene Koh, Brian Wood, Ron Wimberly, Stuart Moore, and many more.

The founders of Stela come from the comics, gaming, and mobile gaming industries; and its leadership includes Creative Director and Editor-in-Chief Ryan Yount, and Senior Editor Jim Gibbons (formerly of Dark Horse Comics). Stela intends to bring new content to the app every weekday, and will be available via subscription.

What’s interesting about the design of Stela is that not only is the app optimized for smartphones via heavy use of the vertical scrolling that we’re already so used to doing when we read Twitter, Tumblr, or news articles on our phones, but the comics themselves are also designed to fit this format. So while you may not see, for instance, wide splash pages in the stories, you will get a storytelling mode that doesn’t require pinching and zooming, or swiping in several directions to see a whole page. Instead, the stories, which look great on the iPhone, fit the vertical screen and are easy to read without a lot of fuss (which is great when you’re crowded on the Metro with barely one hand or finger free for scrolling, I can tell you).

I’ve been able to play around with an early version of the app, currently available on iPhones and other iOS devices, and in design, it’s super easy to use, and intuitive for anyone who’s used to consuming content on smartphones. Selecting a story to read is a simple matter of scrolling horizontally through a menu of covers; and once you’re in the story, you can easily access chapters, general info (synopsis and creator information), and a comments section, as well as a “like” button, from a main info page. 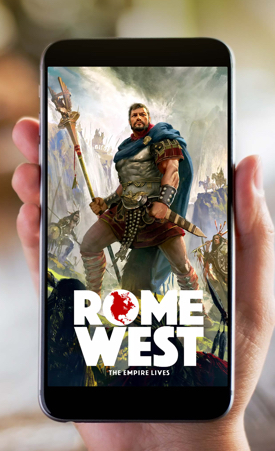 Story chapters are aligned vertically from newest to oldest; and once in the chapter, reading is a simple matter of scrollin’ on down. The app also saves your place in a chapter when you exit, so you can pick up exactly where you left off. To navigate in the app anywhere from the main menu for all stories all the way down to the individual pages is as simple as single taps and vertical swipes. In its logical organization and simplicity of use, the app is pretty exciting.

The sample content that is available so far is also worth paying attention to. The four stories that have a few chapters available, plus the sneak peaks at other upcoming stories, already showcase that the variety of styles and subjects in both story and art should offer something for everyone. From a Roman alternate history story with a realistic art style (Rome West, by Justin Giampaoli, Brian Wood, Andrea Mutti, and Wangjie Li) to a story about a haunted town with a somewhat more cartoonized look (Ghost FM, by Caleb Goellner and Wook Jin Clark) it’s clear the publisher is not limiting itself. Other offerings include Inheritance, a fantasy tale with beautiful art about a magical child living in a treacherous world (by Breakout Bit, Kinman Chan, Ryan Yount, Sam Lu, and Yumiki Hong), and The Winternational, an adventure story with a slightly stylized look, about an agent trying to use recently-acquired “powers of cold manipulation” for good (by Man of Action’s Joe Casey along with Luke Parker, Sonia Harris, and Brad Simpson).

After exploring the new platform, I turned to Senior Editor Jim Gibbons for further information on what Stela’s goals are and what we can expect. Here’s what Jim had to say:

What industry gap does the company see the mobile platform filling?

Jim Gibbons: Right now, comics are penetrating pop culture in a huge way with TV shows and movies. While we’re seeing very healthy numbers coming out of the direct market and implications show a growth of the audience, aided by digital comics as well, making it easier than ever before to find and buy comics, there are still a number of aspects that get in the way of bringing in new readers. Our goal is to make comics as accessible as possible by beaming curated content directly into your pocket for a small monthly fee. There’s less, “Where do I start?” and, “How do I get started?” Instead, you just pop into the app store, plug in your info, and you’re reading incredible comics within seconds. 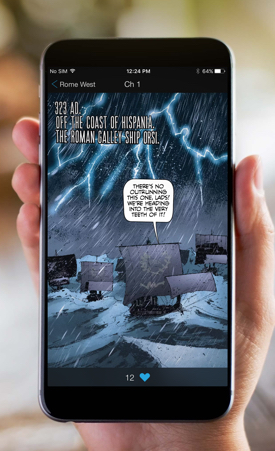 Do you see this as competing with, or complementing, other digital content out there? What is the vision for how this company will grow?

Jim Gibbons: Our goal is to provide great comics content to as large an audience as possible. I view it as complementary to comics, both physical and digital, that exist within the current comics industry. We’re a publisher curating mobile native content meant to be read on your phone. It’s not intended to replace current comics–more to make comics easier to take on the go, easier to read wherever you are, and easier to introduce to non-comics readers. The amount of people who own iPhones is massive. We’re looking to not only deliver comics for current comic book fans, but to reach into the mobile market and convert those iPhone owners into comics readers. Hopefully that leads our audience to the direct market much like we hope our curated, exclusive content brings people to us from the current comics audience, as well.

Why iPhone only? Will it eventually be elsewhere?

Jim Gibbons: iPhone is only the beginning. You gotta start somewhere, right? But the goal is then Android and beyond.

How is this priced, and how is it set up financially for creators? Is this going to change as it grows?

Jim Gibbons: The cost for readers will be comparable to the monthly subscriptions paid for streaming services like Hulu Plus, HBO Go, or Spotify. For creators, we’re paying competitive page rates up front for fully creator-owned content. Creators also receive money on the backend through revenue sharing. Readers who support our app and our publisher are directly supporting our creators. I like to think of us as creator-fueled as we fuel our creators! It’s a partnership and we’re in the business of making dope comics with our creative partners!

I’m sure we’ll change as we grow, but that commitment to our creators and the commitment to making engaging and rewarding comics for our audience will be a constant. 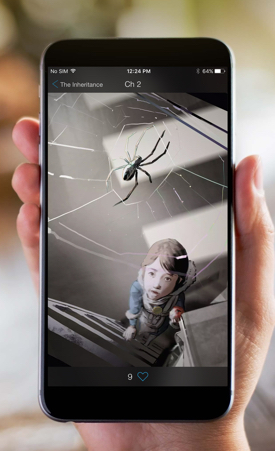 Do you think this is going to change the way comics storytelling is done in bigger ways than just the app? What affect do you hope to see on the comics industry?

Jim Gibbons: While there are certain ways in which our vertical format affects storytelling, it’s still panel after the next as far as a reading experience goes. It’s been inspiring to see creators get excited about knowing exactly what image a reader will see, one after another. I mean, there’s no accidentally seeing a spoiler a few panels down or on the next page. In essence, every panel could be a reveal, and that allows for some suspenseful storytelling.

Hopefully, like all new ways of doing sequential storytelling, we’ll see our format introduce another way of thinking about comics into the minds of creators. Webcomics and comic folks on Tumblr have been playing with format for years. We’re just hoping that we can provide another great venue for those experiments and, in turn, just add another creative jolt to comics as a whole.

What’s the reaction been like from creators working in this format so far? (e.g. limitations resulting from the scrolling design, or any opportunities it’s created in design? How has it affected the storytelling?)

Jim Gibbons: There’s definitely been a learning curve, but primarily people have gotten really excited about the possibilities of the format and the delivery method. I’ve seen an enthusiasm and a speed to back it up on so many projects that I think comes from the thrill of being part of something new. I think each creative team has, in ways, found their own ways to utilize the format and I think they’re all—and hopefully readers will be too—excited to see what they’re adding alongside the innovations others are creating!

After spending some time with Stela, I’m definitely excited to see what else will be coming out of this new company. And although I’ll always love paper comics and their format, I also like having quality content to easily read while on-the-go; and for that, it looks like Stela may be the mobile comics platform I didn’t even know I was waiting for.