Dennis O’Neil: The Ethereal Being and The Invisible Woman 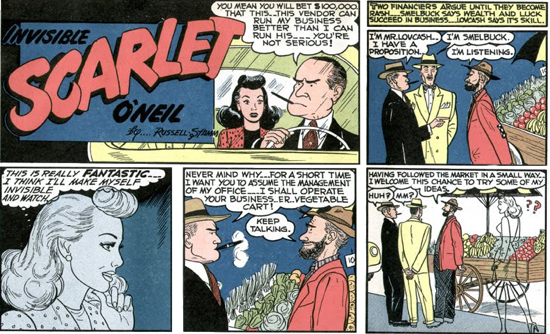 Before we mention Invisible Scarlet O’Neil, let’s expend a few words on an ethereal being – maybe that should be Ethereal Being – who dwells in some vast realm beyond the clouds: Zion. The Ethereal Being I refer to is called an editor and he is a veritable creature of Gold. Last year, when Americans were in a colossal fuss over who was to be elected to their presidency, the EB told us, my colleagues and I, that maybe we should take it easy on the political stuff because this – this, what you’re reading – is not a site devoted to politics but, rather, to pop culture. Being made of gold, the EB must be obeyed and so he was and is, even as I type.

I did mention Invisible Scarlet O’Neil somewhere up there, didn’t I? The snarkier among you might ask why I mentioned her in the first line and then ignored her for the rest of the paragraph. Snark not and instead ask yourself this: Doesn’t every column have to have a first line? The answer? A resounding yes! (Trust me on this; it’s a rule.)

And is there any reason Invisible Scarlet shouldn’t be mentioned?

I don’t know how or when I learned of her, but I can probably guess pretty accurately. When: sometime around 1945, when I was six. Where: Well, my parents rented a flat in St. Louis and I didn’t go anywhere much – certainly not out of the city – so that’s where Scarlet and I encountered each other.

And the how? That’s a bit of a puzzler. Invisible Scarlet O’Neil was a newspaper strip and that’s where and how I must have become aware of her, by looking at what we then called “the funny side” in St. Louis’s morning paper, The Globe-Democrat. Problem here is, my family read the afternoon paper, still publishing, The Post-Dispatch, and never, in my memory, ever picked up the Globe. Okay… seeing my family name in print would have certainly given me pause and maybe prompted me to investigate further. But I was also aware of two other strips carried by the Globe, Dick Tracy and Smilin’ Jack. No familiar names there.

I also went to the movies, usually a small theater, The Pauline, a couple of blocks away, but sometimes pretty far astray, to shows I had to reach by riding the bus! (By myself!) I saw things that never made it to the Pauline. Same kind of entertainment – cowboys, Three Stooges, detectives, the occasional cartoon – but with different stars. Somehow I knew about these pictures and was curious enough to cadge bus fare from my mother and trek into alien precincts.