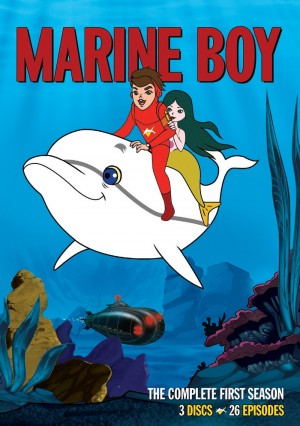 The first wave of anime to arrive in America was usually found in syndication, filler in the mornings and afternoons for the off-network stations in the New York area. It all started with Astro Boy but was quickly followed by Eighth Man and Gigantor, Kimba the White Lion to the Amazing Three. And then there was Marine Boy, the first of the color animated series to be broadcast in America. In his native Japan, the name translated to Undersea Boy Marine and was therefore Americanized.

Produced by Minoru Adachi and Japan Tele-Cartoons, there were 78 episodes in total and the first season or 26 episodes, have now been collected by Warner Archive, which is fitting since Warner was the company to distribute the series back in the 1960s.

Sometime in the future, there lived a boy, maybe 15, remarkable enough to serve as a full-fledged agent of the Ocean Patrol. Their mission was to troll the seven seas and ensuring that the undersea ranching, mineral and oil exploitation, research, and undersea habitats were safe. With all this prosperity above and below the surface, there seemed to be an unending supply of single-minded villains out to seize control of some portion of this prosperity for themselves.

Thankfully, Dr. Mariner and Professor Fumble were on hand to grow and equip the OP with the gear they needed to keep fish and man safe. Various-sized craft were dispatched but the series focused on the P-1, manned by the comedic duo of Bolton and Piper along with the title character. Marine Boy is an all-around all-star, the perfect athlete, swimmer, tactician, etc. He was beloved by all, including sea life in the form of the friendly dolphin Splasher. Since he insists on heading into action, he’s been equipped with a special wetsuit that allows him to withstand the varying pressure changes underwater along with a ring that can whistle for dolphins and the frequently-used oxy-gum. Odd for the water, but he uses a boomerang with deadly accuracy.

He’s also accompanied by Neptina, a slightly younger girl who just happens to be a mermaid. Little was revealed about her race but she wears a pearl around her neck with a wide array of convenient magical powers.

The stories are all long before ecological issues were common so were far more typical adventures such as investigating what happened at drilling Satellite Station 23 or the self-proclaimed Emperor of the Pacific Empire. There’s a certain simple charm to them even if the criminal mastermind of the week grew a little tiring.

Growing up, I never warmed to the show although my siblings liked it well enough. It was certainly engaging enough back in the day and was clearly a stepping stone to the American market and other projects.

One of the Earliest Anime in America, Marine Boy, comes to Home Video 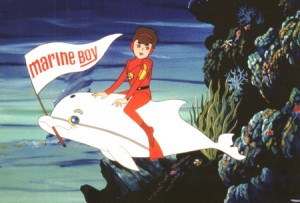 Alongside the heralded Speed Racer and Kimba: The White Lion, MARINE BOY was one of the original handful of imported television series that captured youngsters’ imaginations and put Japanese anime in the stateside consciousness.

Produced in Japan but intended for first-run syndication in the United States during 1966-67, Marine Boy was one of the first color cartoons to come from Japan. A teenager with some amazing inventions at his disposal, Marine Boy battles evil on and under the seas on behalf of the Ocean Patrol, aided by his father, Dr. Mariner, and the brilliant Professor Fumble. Joining Marine Boy in his missions are his white dolphin, Splasher, young mermaid friend Neptina, and fellow Ocean Patrol agents Bullton and Piper.

The series even shared some pedigree with Speed Racer, most notably featuring several members of the rival series’ voice cast – like Corinne Orr, the voice of Marine Boy, Neptina and Clicli (as well as Trixie on Speed Racer); Peter Fernandez as Piper and Dr. Mariner (and the original voice of Speed Racer) and Jack Grimes as Professor Fumble and Splasher (Chim-Chim). Jack Curtis provided the voice of the narrator for both series.

If sea-faring adventure is your brand of fun, then Warner Archive Collection has a vault filled with entertainment made for you. From live-action thrillers like Man From Atlantis, City Beyond the Sea and Captain Nemo and the Underwater City to the animated dramas SeaLab 2020 and The Pirates of Dark Water to the silliness of Jabberjaw and Snorks, there’s something for every aquatic fan … including special discounts during the current “Harpoon Sale.” Dive into http://shop.warnerarchive.com/home.do today. 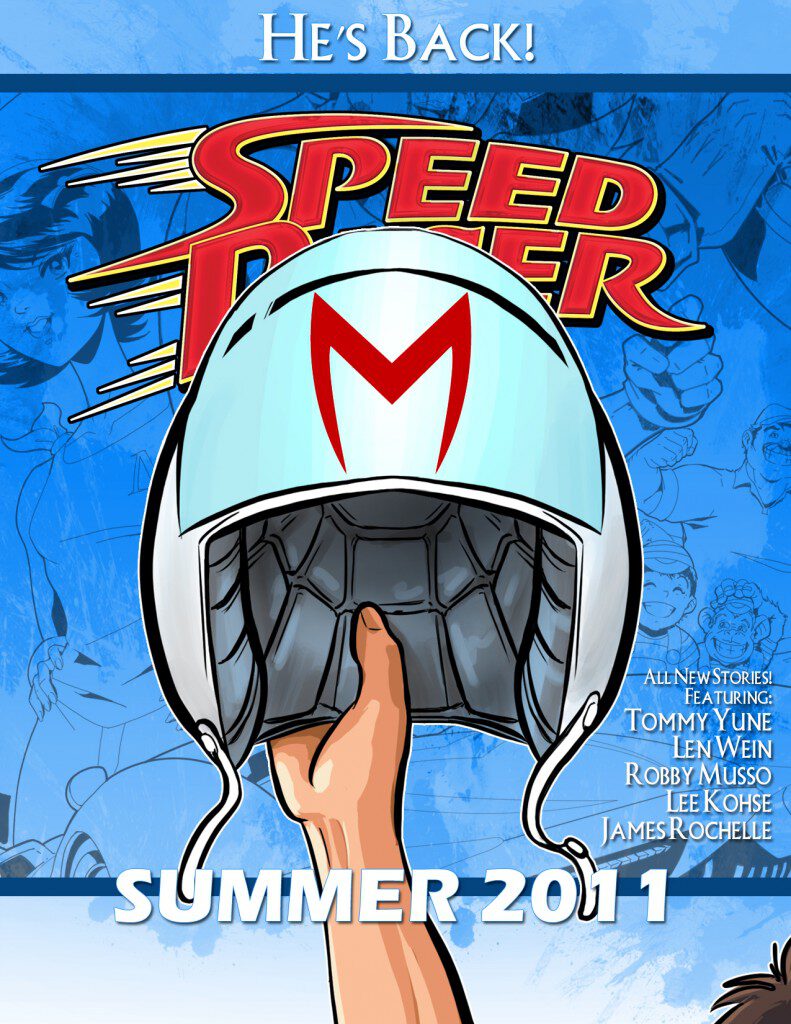 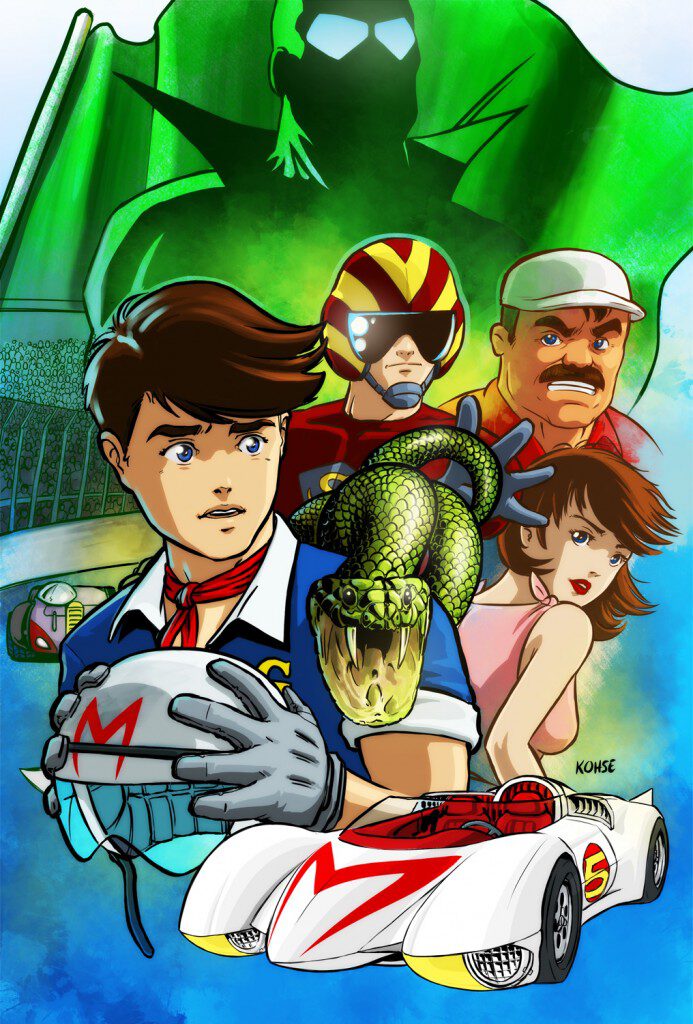 Cynopsis reports that Peter Fernandez, best known as the American voice of the title character in the Speed Racer television series from the 1960s, died last Thursday from lung cancer. He was 83.

Peter also was the voice for Speed’s brother Racer X and other characters for the Japanese anime series that was dubbed in English. He voiced other characters for Lupin III, Astro Boy, Gigantor and Marine Boy. Additionally, Peter made a cameo appearance in the Warner Bros.’ 2008 live-action Speed Racer film.

Born in New York City, Fernandez started as a child model for the John Robert
Power Agency. He then appeared on both radio and Broadway until he was drafted into
the Army at age 18, late in
World War II. His radio appearances included roles on “Superman”, “Mr. District
Attorney”, “Let’s Pretend”, “Gangbusters”, “My Best Girls”,
and “Suspense”, as well as on many soap operas. After his discharge from
the Army in 1946, he became a prolific writer for both radio and pulp
fiction.

In later years, he was the voice director for numerous animated series, including Adventures
of the Galaxy Rangers and Courage the Cowardly Dog, which he
has said was his favorite. He made cameos credited as “additional
characters” in several episodes, including his role as the voice of Robot
Randy.

We hope that his eulogy will be delivered in a very rapid yet perfectly understandable style.

You can tell the summer is over just by looking at the box office gross chart and see that the cool films have arrived and we’re in a lull as people focus on school and the arrival of the fall television season.

The number film this weekend, based on Box Office Mojo projections, is Nicholas Cage’s Bangkok Dangerous, which didn’t even screen for critics so there was zero buzz surrounding the film.  As a result, it took in just $7,800,000 to nab the number slot, just a few hundred thousand ahead of Tropic Thunder, which grabbed $7.5 million for number two. With a total haul of $96,811,000, this is one successful comedy.

Showing surprisingly strength with a mere 29.1% drop off after three weeks of play is Amt Seadris’ The House Bunny with a total of $36,999,000. Comedy continues to do well as Pineapple Express remains in the week’s top ten with a total of $84,158,000, clearly profitable given its $27 million budget. On the other hand, Disaster Movie sits like the turkey it is, earning just $3.3 million this weekend.

Despite being disavowed by everyone but the audience, Babylon A.D. continues to chug along, grabbing $4,000,000 and bringing its total to  $17,198,000 which likely will make this yet another financial disappointment for 20th-Century Fox.

END_OF_DOCUMENT_TOKEN_TO_BE_REPLACED

Everyone at the racks this week is probably in agreement that Iron Man rocks and Speed Racer, well… doesn’t. But the opinions are much more divided on the topic of DC’s decision to apparently return Barry Allen to the land of the living. There are more clues to what they have planned in this week’s batch of new comics, which we cover, plus:

— Eli Stone is coming back

And then there’s Jim Bowie. No, really! Press the Button and we’ll show you…

Greetings from Asbury Park the wilds of New Jersey, where I’m visiting my Mom for Mother’s Day!  Hope all you moms out there are having a good one.  Here are some loving presents we’ve given you, and every other ComicMix reader for that matter, this past week:

Hey, why not take your Mom to see Speed Racer today?  After all, Susan Sarandon plays the protagonist’s mom, doesn’t she?

Review: ‘Speed Racer’ – Emile Hirsch Gets Behind the Wheel 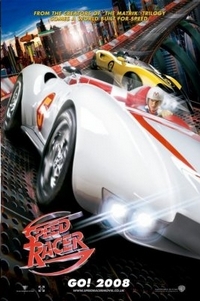 So here we are, a mere two weeks into the Blockbuster Season and the veil of bedazzlement has already been lifted. If you are a fan of the original [[[Speed Racer]]] franchise, animated films, or even decent films in general, you will more than likely be disappointed with the film that should’ve been more accurately named [[[Speed Raver]]]. From start to finish, this film is very much like what an 8-year-old would do if he were given a crate of Pixie Stix and free run of a CGI studio, with no knowledge whatsoever about pesky details like story structure, character development or any shred of realism.

For those not in the loop, the story of Speed Racer surrounds not just the titular character (played by possibly one of the better actors of his generation, Emile Hirsch), but his über-supportive family. Pops and Mom Racer, played by John Goodman and Susan Sarandon, respectively. Balancing out the cast was Speed’s girlfriend Trixie (Christina Ricci), his obnoxious and extraneous little brother and pet chimp, and by far the MVP of the film, in Matthew Fox as Racer X.

The plot, or at least what one can gather about it after two hours in the theater, takes place in a world where car racing is king and the car-building Racer family takes aim at the allegedly fixed world of professional racing with their prodigal son, Speed. The plot is almost beaten into our heads for the first hour, with cartoonish performances and poorly rendered backdrops aiding along the way.

END_OF_DOCUMENT_TOKEN_TO_BE_REPLACED

Born in 1965, Nat Gertler started in comics as a translation writer, working on the English language adaptation of Speed Racer for Now Comics back in 1988.

He wrote contributions to Warp Graphics’ ElfQuest and to Calibur Comics’ Negative Burn in the 1990s, and then founded About Comics, a small comic book publishing company whose focus has been on quality rather than quantity.

Gertler published his own miniseries, The Factor, through About, and garnered an Eisner Award nomination for it in 1999.

He also created the 24 Hour Comics Day event, edited a variety of comic books and nonfiction books, and has written not only comic books but fiction, nonfiction, television scripts, and video games.

ComicMix Radio: Back In The Flash

It’s a new direction for The Flash, a boat-load of second printing variant comics, and no less than two Katee Sackoff DVDs that hit the stores this week. We’ve got your new comics & DVD rundown, plus:

— Marvel and FX cook up a movie deal

— It’s in the cards for Speed Racer at Topps

—  And we feel so generous that here is a hint for today’s new trivia question that is worth an  exclusive Graham Crackers Comics variant — and you win by e-mailing us at: podcast [at] comicmix.com

It’s all a click away, so just press the button!