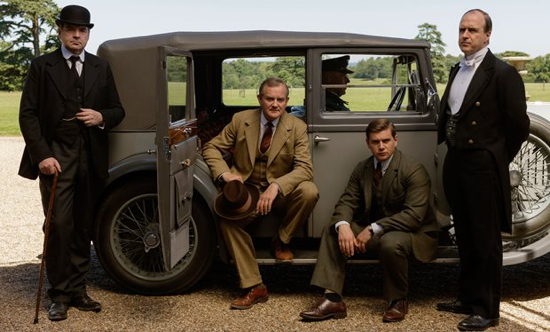 Lady Sybil Crawley (Jessica Brown Findlay): No one ever learned anything from a governess except for French, and how to curtsy.

Charles Carlson, Butler (Jim Carter): We may have to have a maid in the dining room.

Robert Crawley, the Earl of Grantham (Hugh Bonneville): Cheer up, Carson. There are worse things happening in the world.

Carson: Not worse than a maid serving a duke.

I’ve been binging on Downtown Abbey the past couple of weeks in preparation for the show’s sixth and final season, which premiered last night; it’s already ended over in the U.K.

I actually came “ratha” late to this period drama, picking it up somewhere in its fourth season. My daughter had been raving and recommending it for quite a while, but I had avoided it, thinking it a rip-off or tired replay of Upstairs Downstairs, the classic BBC series that had aired on PBS from 1971 to 1975. And in many, many ways, of course it is. However, the big difference, aside from the modern production values, including location shooting, is that is that Upstairs Downstairs concerned the lives of a family and their servants in London’s fashionable Belgravia neighborhood – “city dwellers” – while Downtown Abbey tells the story of a titled aristocratic family who are historic estate holders in the Yorkshire countryside.

The events of the early 20th century changed the British societal hierarchy, something that had held rigid and unbending for centuries. Social historians mark the sinking of the Titanic in April 1912 as the first crack in this structure, and Downton Abbey began with this, as Robert Crawley, the seventh Earl of Grantham, is told that his designated heir went down with the liner leaving only a distant cousin, a “middle-class” untitled lawyer, as his successor. His oldest daughter, Mary, cannot be considered to follow Robert because of the long-established and legal tradition of the “entail” which endows titles and estates exclusively on male heirs. (It was only in 2013, with the passing of the Succession to the Crown Act by Parliament, that the laws of succession were changed to allow the first-born, regardless of sex, to inherit the crown.)

The British political Marconi scandal of late 1912, World War I, the 1918 Spanish Influenza epidemic, the birth of jazz and the “Roaring Twenties,” the formation of the Irish Free state, the Teapot Dome Scandal, the first Labor government in British history, the Jallianwala Bagh massacre in India – reference Richard Attenborough’s 1982 Ghandi – and the Beer Hall Putsch of 1923 (in which Adolf Hitler and the Nazi party first failed to seize power in Munich) all figured predominantly as the series progressed, as these historical events shaped and shoved and remolded Downton Abbey and the real estates on which it is based into either something new and thriving, or destroyed them and the villages that had grown up around them.

It remains to be seen, at least here in the United States, if the fictional Downton will also die, or, like Highclere Castle, the 5,000 acre estate and filming location in Hampshire that stands in for the main “house” on the show, will adapt to the currents of history and thrive.

I hear there are already whispers of a movie.