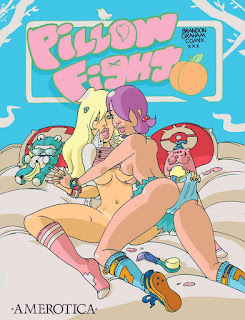 So this is not a book to review, exactly. But, since I’m doing posts on all of the books I read — even now, in my lesser state this year — I figured I should at least mention Brandon Graham’s smutty 2006 “graphic” “novel” Pillow Fight , since I did read it.

Graham, like a lot of comics-makers starting out in the Great Smutty Comics Boom (lasting roughly from Eros’s birth in 1990 to the utter apotheosis of the Smutty Internet and the near-simultaneous Great Recession), did smutty print comics at the beginning of his career. This was one of them; it followed the similar album Perverts of the Unknown, which I haven’t seen. (He did other, non-smutty early work, too — that was pretty common, and probably still is these days, though the smutty stuff now tends to be password-locked at places like Slipshine and Filthy Figments, so it may be easier to keep the two strands of career separated without using pseudonyms.)

So Pillow Fight is a short, album-format comic, published as part of a sex-oriented imprint (NBM’s Amerotica), and the plot and characterization is all sex-comic stuff — the point is to move smoothly through a bunch of sex scenes and have some humor and general story virtues along the way as well.

Our main character is Jem, a young woman being sent off to boarding school after her parents walked in on her in flagrante — Graham does not describe exactly what she was doing, or with whom, but it was clearly very steamy, and “with whom” might have been a multiple-choice answer. But she arrives at this unnamed school for “naughties,” quickly meets her new roommate Bones, and first witnesses a scene with said roommate and soon after has sex with that roommate herself. And so it goes on from there — it’s a short book, and the point of this kind of thing isn’t plot to begin with.

Graham has his usual punny jokes — both visual and spoken — though his work was cleaner and less cluttered this early in his career. (He wasn’t cramming in as many visual jokes and pun labels at this point.) The jokes tend to be up front in the narrative in this book instead of half-hidden off to the edges.

But the point is to be a sex book, with nubile young women enthusiastically doing every last thing the young Graham could think up. Graham’s line was zippy and precise by this point; it’s drawn in basically the same style he still uses now. It’s mostly of interested to big fans of Graham (like me) digging up the last disreputable corners of his oeuvre, or for people who really really like naughty schoolgirl stories. 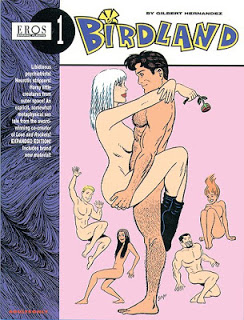 It’s also chock-full of sex, which might be why it’s not in print these days: sex has migrated almost entirely to the electronic realms for the 21st century, since print can’t keep up and is pirated within seconds. (Other possible reasons: Hernandez or his publishers think it wouldn’t be good for his current career, normal book/comics outlets have gotten more prudish over the past couple of decades, or the stars are not quite right.)

Anyway, this is Birdland . It’s an unabashedly pornographic comic by Gilbert Hernandez, originally published as a three-issue miniseries by Fantagraphic’s spin-off smut-publishing line Eros in 1990, with a loosely-related mostly-silent one-shot in 1994. I read the 1999 printing of the trade paperback collection, which has what I think are all of the Birdland pieces together.

It’s set in a porno next-universe-over version of his Palomar/Luba world, circa 1990: Inez and Bang Bang are strippers at Polka Parade, a young Fritzi is a therapist and her sister Petra is her receptionist. The central male character is Fritzi’s husband — at this point, her only one, but that would change in the regular continuity — Mark Herrera, though his brother Simon is also important. There’s also La Valda, another stripper for the competing club Stinky’s who “steals Bang Bang’s act” (said act, in toto: looking like she does, dancing naked, band-aids over her nipples) and Stinky’s doorman Pee Wee, so there can be another man for the sex scenes.

The plot is loose and semi-random, but it’s more than just an excuse for the sex scenes: Birdland feels like Hernandez turned up the sex knob on his work to eleven, then broke it off and jammed it even further up with pliers. It’s more explicit — very explicit, with lots of spurting bodily fluids and engorged appendages being rhythmically inserted hither and yon — but it’s all embedded in one of those Beto obsessed-with-the-wrong-person plots.

Since the knobs are jammed up past eleven, everyone is obsessed with sex with the wrong people: Fritzi has frozen out Mark for unexplained reasons, but he’s having affairs with both Inez and Bang Bang while pining for his wife. Simon is obsessed with Fritzi, and sleeping with Petra as the next best thing, which is fine because she’s obsessed with Mark in turn. Fritzi’s practice consists entirely of hypnotizing her (all male) patients and having sex with them while they’re under — before long, Petra learns the truth and gets into the action, too. And then there are the aliens, who wander around the edges of the beginning of the story before abducting everyone for the literally climactic ending of the original mini-series, as everybody gets it on with everybody for a cathartic release before returning to earth to ring more changes on the same relationship problems.

Hey, it’s a sex comic: you have to expect that it’s going to be full of sex. Birdland‘s sex isn’t the zipless fucks of the usual stroke book: Hernandez’s characters are obsessives, and endlessly talk about who they love and want and can’t have even while bopping with the wrong person.

In a lot of ways, Birdland feels like unfiltered Gilbert Hernandez: all of the sex, all of the surrealism, all of the random connections, all of the quirky spirituality. Whether it really came out that way or if he carefully crafted it to look that way doesn’t matter as much — either way, this is close to peak Beto, right in the middle of his career. If you’re interested in his work, and aren’t turned off by the pervasive sex, Birdland is a book you need to pay attention to. (Assuming you can find it.)