Enter to see #RogueCut of X-Men: Days Of Future Past at SDCC free! 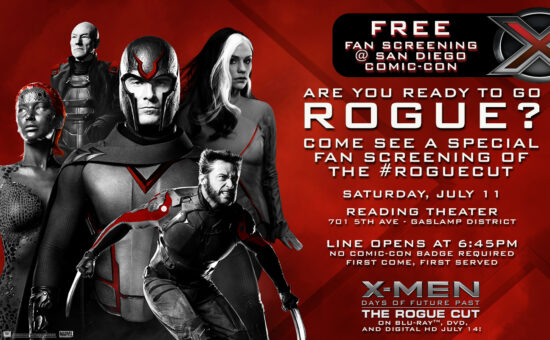 To celebrate the home entertainment release of the X-Men: Days of Future Past Rogue Cut Blu-ray on July 14th we’re hosting a contest!

On Saturday, July 11th, the never-before-seen extended #RogueCut edition of X-Men: Days of Future Past will be screened at the Reading Theater in the Gaslamp District of San Diego. And we’ve got the chance to give away 10 pairs of VIP access wristbands. That’s guaranteed access to a screening!

We’ll be choosing winners at random, the only requirement for winning is that you will be in the area and able to attend. No San Diego Comic-Con badge needed! All you have to do to enter is comment on this article using a valid email address and you’ll be entered for a chance to win.

Don’t worry if you don’t win passes, you will have the opportunity to gain two VIP (guaranteed) access tickets to the screening by purchasing the X-Men: Days of Future Past Rogue Cut Blu-ray through one of these locations:

Additional seating will be available to fans on a first-come, first-served basis.

Beyond the two VIP tickets for the special screening, fans that purchase the Rogue Cut early on Blu-ray and DVD during Comic-Con will also score a limited edition lithograph, celebrating 15 years of the X-Men franchise. Rogue Cut will contain nearly 90 minutes of extra features including deleted scenes, featurettes and gag reels, sure to engage the most ardent enthusiast.  This entire package of content will be available at MSRP $19.99 and is a must-have for every X-Men fan.

ABOUT X-MEN: DAYS OF FUTURE PAST ROGUE CUT

With a never-before-seen, alternate cut of the film—plus nearly 90 minutes of all-new, immersive special features, the X-Men: Days of Future Past Rogue Cut takes you deeper into the X-Men universe than ever before. Rogue makes her return as the all-star characters from the original X-Men film trilogy join forces with their younger selves and unite to battle armies of murderous Sentinel robots who are hunting down mutants and humans alike!

Remember, all you have to do to enter is comment on this article using a valid email address and you’ll be entered for a chance to win. May the odds ever be in your– no, that’s the other Jennifer Lawrence film franchise. Good luck! See you in San Diego!

The Point Radio: Aaron Ashmore Could Use The Force

Aaron Ashmore joins us to start our coverage of the new SyFy series, KILLJOYS and to talk about his wish for a role in STAR WARS. Then THE TODAY SHOW’s Tamron Hall talks about the third season of her series, DEADLINE:CRIME on Investigation Discovery.

The Point Radio: A Different Path For THE FOLLOWING

Season three of THE FOLLOWING has kicked off and everyone wants to know just what’s ahead for Ryan Hardy. The man who can answer that best is Kevin Bacon, and he talks about why this season is so unique for him and the show. Plus former WWE Superstar Alberto DelRio is now Alberto El Patron and heading up the crew of LUCHA UNDERGROUND on ElRey. He talks about the rich history off wrestling in his native land and just why thing went south at The WWE.

The new USA Event Series DIG is about to begin and we take you to the set for an exclusive you’ll only here with us in just a few days.
Be sure to follow us on Twitter @ThePointRadio.