Mike Gold: Well, It Ain’t Much Of A Secret War 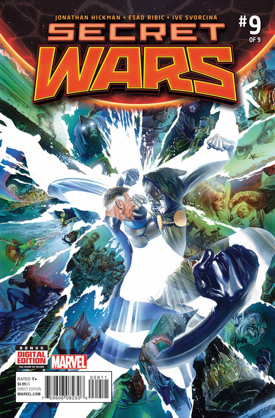 Our friends at Marvel Comics have informed the world that “the biggest Marvel event of all time” will come to an end four weeks from today, on January 13, 2016.

Of course, the “biggest Marvel event of all time” is in the mind of the beholder. Personally, I would have picked the release of the first Fantastic Four #1 back in 1961, or the release of Marvel Comics #1 back in 1939. But that’s just the way I see it, and I’m the one digressing from the point.

They’re talking about the release of the ninth and final issue of Secret Wars, the third such dull mega-event employing that title. The penultimate issue came out last week, and that one was late. This one is later. In fact, it is so late that the entire Marvel Universe which was supposed to be upended by this series (opinions differ) already has been upended to the extent that it was to be upended, and the “All New All Different” #1s started shipping last month. The House of Idea delivered something like six second issues this week alone, plus one or two third issues, plus two All New All Different first issues. Again, I’m talking about what arrived in the stores today.

So, to the extent that the “event” was an event, the ending is not. Well, maybe a little, as Alex Ross’s beautifully subtle cover suggests (as does Scottie Young’s variant cover, but it’s done is a somewhat different style). I’m not knocking the series itself; it’s pretty much as good as those things get and, having stewarded one of these things myself, I know how difficult that is. Well, maybe not: I worked for Dick Giordano and not for the ghost of Walt Disney. 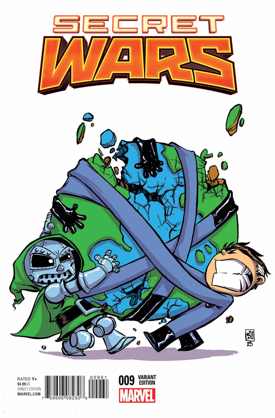 But most all of the cats are out of the bag, and the one or two left in were clearly in need of kitty litter. Once you blow the ending in many dozen comics that precede the finish, you’ve got no finish. Just one long, nicely illustrated footnote.

Secret Wars 2015 has been a fiasco. Counting the number of comics that tied in to the series is a lot like guessing the number of jelly beans in the jar at the voter’s registration office: it could be done, but it’s far easier to just talk a walk. There were Ultimate tie-ins, 2099 tie-ins, Age of Apocalypse tie-ins, Marvel 1602 tie-ins, House of M tie-ins… and something called “Battleworld.”

I read a number of the many Battleworld mini-series, and some of those were pretty good. Therefore, some were not. But, really folks, we used to get those sort of stories in one sitting in a giant-sized comic book called What If? Battleworld should have been titled Why Bother?

Having talked with my fellow comics fans at a ridiculous number of conventions and store appearances lately, I know I am not the least bit alone in saying this. “All New All Different” is just more of the same old same old, to be dicked around with in next summer’s Big Event.

Marvel said Secret Wars 2015 wasn’t a reboot, and as far as I can tell it mostly sort of wasn’t. It’s a reboot in the way that the Doctor Who revival a decade ago was: some things have changed, but that change came in a linear fashion. However, there is one important difference: the Doctor Who revival was quite, quite good.

I’ve been a Marvel Comics fan since Fin Fang Foom was a hatchling, so I don’t want to end on a downer. So I’ll say this: despite its many problems, its overreach and its oversaturation, Secret Wars 2015 made a hell of a lot more sense than Convergence.