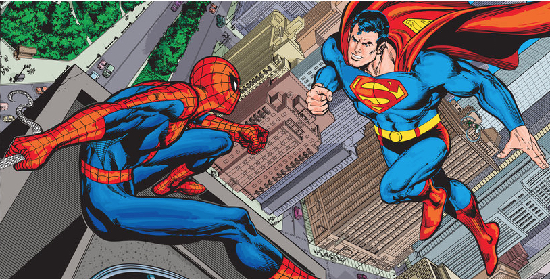 Now I know that some of you are huge – huge! – science fans while others… well, you might prefer to get your science from old Julius Schwartz comic books. (Remember those old filler features that Julie ran? “Science Says You’re Wrong If You Believe…”) You guys – you Juliers – can consider your class dismissed until next week. You others?

Let us consider Pluto. No, not the Roman god of the underworld, or Disney’s canine, and certainly not Popeye’s archenemy – that was Bluto-with-a-B. We mean the planet. Pluto-the-planet has been much in the news this past week because we put a spacecraft within about 7000 miles of the planet’s surface which, in astronomical terms, is the back yard, and it sent back a lot of data and will continue downloading information for months. So, at the end of the process, we’ll know a lot about Pluto and maybe have some of the Big Questions answered, stuff like why/how are planets and solar systems formed and what the heck are we doing here, anyway.

Oh, and you fussers out there – I know that poor Pluto is no longer considered a full-blown planet. A few years back the people whose job it is to do things like decide on the classification of astral bodies, folks like Neil deGrasse Tyson, decided Pluto was too small to qualify as a planet and so they renamed it a dwarf planet and dwarf-schmarf, say I. The naming business is all arbitrary anyway. The universe doesn’t classify. We do. As human activities go, this one is pretty harmless and if you want to use the “dwarf” label, be my guest. But I’ll stick to calling that orb at the edge of our solar system a plain old “planet,” thank you very much.

Did I mention that I’m fond of (planet) Pluto? A decade ago I made it a character – well, an object, really – in a novel. I’m not sure why. I guess I thought my plot needed something at the far reaches of the solar system and Pluto, 4.67 billion-with-a-B miles away, certainly qualifies.

I got all the information I needed about it from a book I can recommend Don’t Know Much About The Universe, by Kenneth C. Davis. It’ll also tell you about the other planets and the sun and like that. Readable and informative.

Why bother to do this (very minor) bit of research? Maybe it’s my journalism background or maybe I just need a good laxative, but I think we writers, even we fiction writers, have an obligation to society not to spread misinformation. That’s the politicians’ job. If you’re equipping your hero with a Whoseatronic Ray Blaster, you can make it be or do whatever you like. You’ve just made it up, after all. But if you use something that’s real, be accurate. There’s already enough bad info out there.

And by the way…Science Says You’re Wrong If You Believe That Pluto Is that damn dog.