Producer Gale Anne Hurd has been involved with some of the most successful and exciting sci-fi and action films of all time. From the original Terminator through Aliens, Terminator 2, Armageddon and the recent Hulk, Hurd continues to deliver successful, entertaining and action-packed films over and over again. And her career is showing no signs of slowing down.

Recently, Hurd is readying yet another comic book adaptation for the big screen — a new new film called Punisher: War Zone which is, of course, based on the very popular Punisher comic. I caught up with Hurd at the San Diego Comic-Con to talk a bit about the new film, its dark, violent nature and why she thought a woman was the perfect choice to direct it.

COMICMIX: Hi Gale, thanks for talking to me. Let’s get right to it. Is Punisher: War Zone a sequel, a reboot or. . . ?

GALE ANNE HURD: its a reboot. We wanted to really go back to the origin but this isn’t an origin story in the way that we did it with hulk and take the origin of the punisher from the comic and we have that set up in flashbacks. So in the film we have Frank Castle set up on his mission of vengeance to punish the guilty.

iIs very much a MAX series. It’s a pedal to the metal, violent, tough hard-core film and it takes place in New York. We knew the heavy-duty fans were disappointed that the earlier film took place in Tampa.

For this movie we wanted to go back to the essence of the character, the locations, the other characters and the world and make it much closer to the comics.

CMix: Was it difficult decision to go back and reboot the franchise? Why did you do it? Did the first film not do well?

END_OF_DOCUMENT_TOKEN_TO_BE_REPLACED 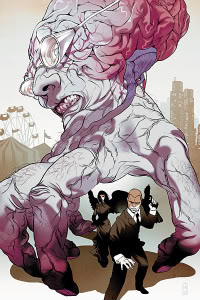 In a bit of a strange coincidence, Vertigo has two new collections out this week that both prominently feature futuristic science and genetic manipulation. The books couldn’t be more different, though, with The Un-Men

($9.99) shining a freaky spotlight on some minor Swamp Thing

($14.99) taking a more serious look at the intersection of intelligence of the natural and artificial varieties.

Let’s look at [[[The Un-Men]]] first, if for no other reason than it being the better of the two books. Writer John Whalen takes the largely forgotten mutated monsters and carves a perfect little niche for them – Aberrance, a town of genetic weirdos.

Without ever becoming self-serious, the story explores the rift that’s formed between those in charge of Aberrance and the lower class of freaks. When one of the protesters turns up dead, a federal agent (an albino, which makes him the normal guy) steps in to investigate. Wackiness ensues.

While the murder mystery never takes on any import, the book sludges along with constant splashes of the bizarre and disgusting, each chapter managing to out-freak the last. It’s spiced with some catchy dialogue, such as, “Rome wasn’t sacked in a day.”

The big conclusion doesn’t make a whole lot of sense and the art is a bit too ordinary for the subject matter, but The Un-Men is still one of the most entertaining and creative new series from last year.

END_OF_DOCUMENT_TOKEN_TO_BE_REPLACED

James Purefoy returns as The Saint

A new generation is about to meet the famous Simon Templar. James Purefoy, best known for playing Mark Antony in Rome and getting let go from palying V in V For Vendetta, is set to play Simon Templar in the forthcoming TV series of The Saint.

No fewer than 10 actors have portrayed the character, including the legendary George Sanders and former Maverick / future James Bond Roger Moore. Another nine actors played him on radio, including Vincent Price.

William J. Macdonald (Witchblade, Rome) is prepping a two-hour pilot for a European shoot. Shooting in Berlin and Australia begins in April.

Burl Barer, Edgar Award winning author of The Saint: A Complete History, is also on board.  Barer, authorized by the Estate of Leslie Charteris to write new Saint novels and short stories, will novelize the movie length pilot and future episodes for a new generation of Saint fans.

Well, I’m back from the San Diego Comic-Con, and if you’ve been reading ComicMix’s coverage, you can probably guess that it was no place to actually write a DVD review column. Get info, acquire more product, see what’s happening, sure, but actually write reviews of other DVD special features? Fergettaboutit.

Between my 8th Annual San Diego Comic Con Superhero Kung-Fu Extravaganza there, which takes up three hours of prime time for a couple thousand hard-core martial art movie fans, and the many DVD companies/people I hobnobbed with, I had no time to tell you that the discs to grab this week are the 300 Special Edition and Hot Fuzz. But I’m hoping you already figured that out.

So too late there. But since I was up to here as the “kung-fu guy” at the con, I can use this space to clue you in on some discs I should’ve mentioned weeks ago, as well as letting a monumental box set being released next week bring other recent travels into pretentious, self-absorbed focus.

First off, head to your sales place of choice and get the Dragon Dynasty editions of The 36th Chamber of Shaolin and My Young Auntie. When I began this column almost three months ago, I promised myself not to inundate you with kung-fu, samurai, or other such Asian titles. But what can I do? I originally discovered these films thirty years ago, because, to my eyes, they were comic book come to life — with actual people doing Daredevilly and Spidermanny things without the benefit of wires or sfx.

Since then, I’ve discovered, through research, that they’re much more than that, yet the original exhilaration I felt is still being revealed to fresh eyes … hopefully like yours. Especially since companies like Dragon Dynasty, controlled by the Weinsteins, are finally revealing the glory of timeless 1970’s classics in a manner befitting their excellence.

END_OF_DOCUMENT_TOKEN_TO_BE_REPLACED

DENNIS O’NEIL: Do You Believe In Magic?

Here it is Tuesday evening and we’re still debating. Should we go to the 11:59 showing of the new Harry Potter flick at the local 21-plex or catch one of the early showings in the morning?  Pros and cons on both sides.  But we will see the movie within the next 24 hours; count on it.

Although I’ve enjoyed the previous films, I can’t call myself a Potter fan.  I haven’t read any of J.K. Rowling’s novels, though I love Ms Rowling’s bio: single mom writing in a café becomes hugely successful author, celebrity, and megamillionaire within about a decade, without becoming a robber baroness.  But Marifran’s read the books.  Oh yes indeed.  And so have daughters Meg and Beth.  So I’m pretty up on the Hogwarts scene and when the final volume in the series arrives in a couple of weeks, I expect my conversations with my wife to be conducted in monosyllables until she reaches the last page and learns Harry’s fate.

I’m surprised that these things are so popular, as I was surprised at the resurgence of interest in J.R.R. Tolkein’s Lord of the Rings saga and the huge success of the movies made from Tolkein’s trilogy. The reason is, I thought we were past believing in magic.

Oh, sure, you don’t have to actually believe in something to enjoy stories about it.  But we do have to be able to accept it on some level. It helps the willing suspension of disbelief your English teacher told you is necessary to the enjoyment of fiction if you can allow that what you’re being told about exists, or could exist, or at least might have existed. Hero stories are about as old as civilization, and the tale-tellers always supply a reason why their protagonists have extraordinary powers.  In classic Greece, for example, and later in Rome, superpowers were explained by their possessors either being gods, or half-gods, or children of gods, or gods’ special pals.  Then plain ol’ magic, origin unknown, was used to rationalize superhuman feats in folk tales like those in A Thousand and One Nights.