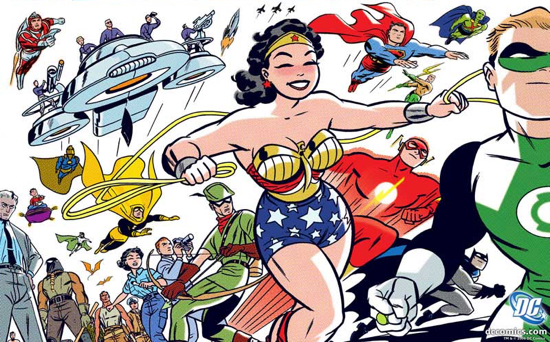 On the way to RocCon, the Rochester Comic Convention, my cousin John gave me a comics-related clipping that his mom, my Aunt Carolyn, asked him to pass along. It was from the Catholic Courier and it was a positive review of Darwyn Cooke’s graphic novel The New Frontier.

This week’s column was supposed to be about RocCon, but the clipping about The New Frontier sent me in another direction. So instead let’s focus on purpose, Geek Culture and the Catholic Courier clipping.

But first a little background on Darwyn Cooke’s The New Frontier. This graphic novel was originally released as a six-issue miniseries in 2004. The Catholic News Service review describes it this way:

Set in the 1950s and early 1960s, the novel…examines issues of racism, immigration, the blacklisting of accused subversives and the morality of the Vietnam War.

More important, in The New Frontier creator Darwyn Cooke firmly established the DC Universe as a place where focused individuals work hard to create positive change that benefit everyone.

Still, it was strange to reed about this graphic novel in a Catholic newspaper. Back in the day, I don’t recall a whole lot of support from the Catholic Church for comics. More recently, I’m always surprised when some organized religions protest against fiction like Harry Potter stories for promoting the devil or other rotten things.

This review was different. It was very positive. In fact, they awarded The New Frontier an A-III rating. I never would have imagined that the Catholic Church would formally approve of the Justice League. But you know what? They should have.

Maybe I should have seen the church’s embrace of heroic fiction coming. My Aunt Carolyn, a devout Catholic, has always been pro-comics. She’s retired now, but she enjoyed a long career as a middle school/high school English teacher.

In the 60s, my Aunt Carolyn famously took the initiative to purchase a stack of comics to share with her class. This was in Auburn, NY, a town that back in 1948 had one of those ridiculous comic book burnings to stamp out juvenile delinquency. Despite the fact that she used her own money to buy the comics, the school administration frowned on classroom distribution of “funny books.” They demanded she get those comics out of the school.

So I’m happy that “we” in general, and the Catholic News Service’s reviewer in particular, value positive stories about individuals who routinely engage in self-sacrifice and contribute to the greater good.

I contrast that with current political discussions. It’s astounding to me that so many conversations about the Presidential race don’t value a lifetime of public service.

I’m proud of the fact that often in Geek Culture, there tends to be a value assigned to characters that do positive things.

And taking it a step further, in Geek Culture the real heroes are the creators who got off the couch and created something positive.

None of our fictional heroes are perfect. Certainly few of Geek Culture’s real-life hero-creators are perfect. In fact, one Golden Age artist I constantly put on a pedestal struggled throughout his life. Consequently he was, at times, mean and cruel and disappointed many people.

But it’s not about perfection. It’s about trying to do something positive and succeeding once in a while.

I’m thrilled that the Catholic News Service embraces the message of hope and optimism in that the brilliant Darywn Cooke story, The New Frontier. It’s a fantastic read. However, at the core of that story and so many stories in Geek Culture, there are a lot of positive, hopeful messages. And even the Catholic Church can get behind that.

Oh, that review from the Catholic News Service is here http://catholicphilly.com/2016/07/us-world-news/culture/darwyn-cookes-final-frontier/ if you’d like to read it.