Ed Catto: On the Fringe

In the old days of comics, and for me that was the 70s, the general nerd mindset was that you’d have to identify yourself as either a Marvel or a DC fan. And then read as many comics as possible from that publisher. You’d jump right in, find your favorite series and start reading the new issues while at the same time, working to complete your collection of the old back issues. In this way, the thinking went, you’d immerse yourself in the shared universe of each publisher. 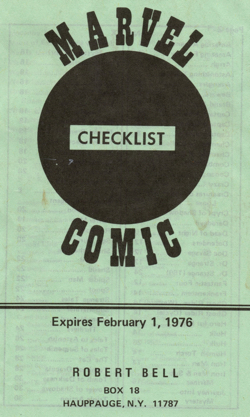 I was reminded of this as I recently came across a 1976 price guide from Robert Bell. He was one of the big back issue dealers back then – you’ve probably seen his ads in old comics. This pamphlet gave the prices for all the current (what we’d today call Silver Age and Bronze Age) Marvel comics. The unstated, overarching goal was to collect them all – and to keep your mother from throwing them out.

Oh, there was the realization of the futility of that quest. Collecting certain titles would be hard to complete. After all, if you were collecting Spider-Man in 1976, you knew that acquiring the first issue was just a pipe dream. After all – who had $110 to spend on one comic book?

Regardless, comic fans could keep up with the current issues and collect the old stuff. And if you loved Marvel or DC, you were definitely buying the best-selling “important” titles.

For example, no true Marvel fan wanted to be out of touch with the important adventures unfolding in the current issues of The Avengers, The Fantastic Four, Spider-Man or Thor.

Curiously, Iron Man was kind of a B-lister then, and it was totally acceptable to take pass on buying his comic on a regular basis. 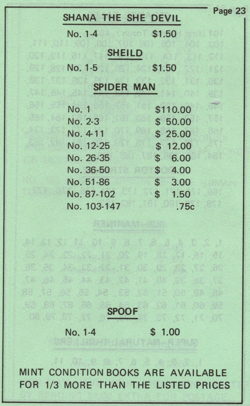 Since the 70s, so many strong publishers with fantastic comics have elbowed their way to center stage so that today there’s no longer that binary choice for fans of Marvel or DC.

Realistically, the “Big Two” still dominate the market in many comic shops and in the cinema. But that’s rapidly changing on both the comics shelves and onscreen. One needs only to point to the incredible success of The Walking Dead to acknowledge that increasingly there are more options and opportunities for other comic publishers.

Which brings me to the curious realization that I’ve become a fringe reader of Marvel Comics. Part of the change is attributable to age, of course, but there’s something bigger going on.

Today I find myself eschewing the popular titles and the crossovers, and I like to stay on the edge of the Marvel Universe. I skip the IMPORTANT comics and instead enjoy comics like 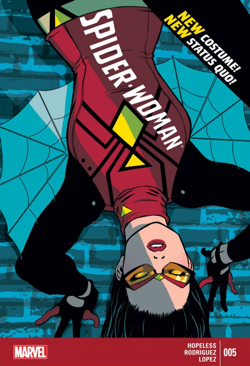 And series like Mockingbird debut, get their chance, but if they fail to click the plug is unceremoniously pulled. The Beat detailed this sad fate with the Mockingbird’s cancellation last week. Of course, there’s more to that story and the cyber bullying that ensued is a serious problem that really demands further exploration.

And while I’m losing track of my old friends in the Avengers and the X-Men, I’m perfectly content with the fine storytelling in these so-called fringe books.

Spider-Woman is a particularly guilty pleasure. Back in the 70s, we all were excited when the series debuted and I dutifully collected it. Even my brother did! Marv Wolfman, and then Mark Gruenwald and Chris Claremont, wrote some off-kilter classics. Since that series concluded, there have been many Spider-Woman reboots and relaunches. One would speculate this was due to Marvel’s focus on keeping a tight hold on the character’s trademark.

When Spider-Woman restarted again in 2014, I gave I gave this delightful series a try.

I think the covers’ unconventional logo placement and the vibrant interior color pallete by Javier Rodriquez caught my eye, but the fun stories by Dennis Hopeless and the intricate Eisnerish panel layouts keep me coming back for more. (There’s usually one or two very clever pages each month. I’m sure this drives the Guided View developers at ComiXology crazy.)

The latest issue focuses on the heroine trying to enjoy a day at the beach, while encouraging her protégé to deal with the day’s work issues. And for a Marvel superhero, work issues means capturing an escaped super-villain. It was such a great read.

My inner 8-year-old keeps asking, “What are the important characters of the Marvel universe up to?” Shouldn’t I be keeping track of Dr. Doom and Kang? I guess so – but my comic book stack is filled with outstanding indy titles (like The Black Monday Murders, Lazarus or Black) and thoroughly enjoying my time hanging around the fringe of the Marvel Universe.

I never thought it would happen to me, but it feels pretty ok.

Oh, and I’m not your mother, but I’ll still remind you to go vote tomorrow.