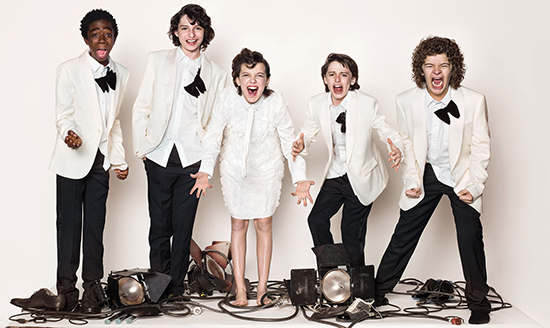 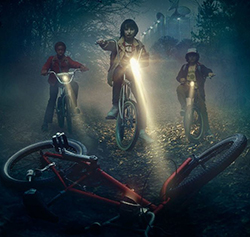 I walked down to the store on Saturday to buy some groceries. It was a gorgeous day here in the NYC metro area – perfect fall weather, not too hot, not too cold, but with just enough of a chill in the air to warrant wearing my mom’s orange-rust suede jacket for the first time.

I was legitimately creeped out.

No, it wasn’t the jacket; she wanted me to have it. Although it made me feel sad and happy at the same time; sad because it was her favorite cool weather gear – and believe me, she always looked beautiful wearing it, even at the ripe old age of 91 strolling with the aid of her red walker – and my wearing it was an acknowledgement that she is no longer here, and happy because the jacket itself wears so many wonderful memories of my mom.

I was legitimately creeped out because I had just finished watching the first five episodes of Stranger Things 2.

Didn’t mean to binge. But, just like last time, ST2 pulls you in and you just can’t stop watching. I only managed to pull myself away after five episodes because, well, Mrs. Hubbard’s cupboard was bare, I was hungry, and I didn’t feel like ordering out. Also, I wanted to save myself for marriage… no, that wasn’t it. The season is just so damn good that I didn’t want it to be over too soon. Sorta like the wedding night you saved yourself for – well, if you’re lucky.

I’m attempting not to spoil anything here, so I’m going to give you only a brief and wide outline of the first episode. You’ll thank me in the morning.

That first episode, “Mad Max,” starts almost exactly a year after Will Byers was rescued from the “Upside Down”; 352 days, to be exact. But we aren’t in Hawkins, Indiana. We’re in Pittsburgh, and we’re watching a robbery take place. And as the police chase the getaway car, we discover that one of those lab rats who came before the girl called Eleven is in the car. And as we watch, she enables a getaway that needs to be seen to be believed. (You’ll understand my turn of phrase when you watch the episode – again, I am endeavoring not to spoil anyone.) 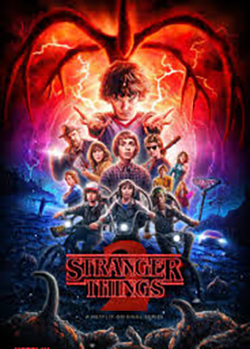 Meanwhile, back in Hawkins, 1984, it seems that everyone is getting on with his or her lives and put the past behind them.

Or so it seems.

As obsessively geeky as ever, Will and his buds (Mike, Dustin, and Lucas) are at the arcade, where they discover that someone has topped Dustin’s score at Dig Dug.  Turns out it’s the new kid in school, whose calling card on the video game is “Mad Max,” only he is a she, Maxine, and suddenly Lucas and Dustin are aware of their raging, adolescent hormones.

But for Mike, there is still only Eleven, and there is no turning back, as he tries to raise her on the walkie-talkie while sitting in the little lean-to he made for her out of seats and sheets in the basement.

His sister Nancy and her boyfriend Steve are still in love, but while Steve has seemingly and successfully moved on, Nancy is quietly suffering from post-traumatic disorder, still mourning her friend Barbara and feeling all sorts of guilt for not telling Barbara’s parents, who are stuck wondering what happened to their daughter, the truth.

And then there’s the wild and crazy but determined investigative reporter who reminds me of a younger Bob Balaban and acts like Fox “Spooky” Mulder on magic mushrooms, who just knows The Truth is Out There.

He is suddenly thrust into a vision of the Upside Down. The arcade is dark, those little particles that look like individual dandelion puffs are floating everywhere, Mike and Dustin and Lucas are gone, everyone is gone, and he is alone, except for an eerie, reverberating, and muffled thunderous noise. He follows the noise outside, and witnesses a landscape and sky turned into a hellish aftermath of a nuclear blast; it is the end of the world as we know it. 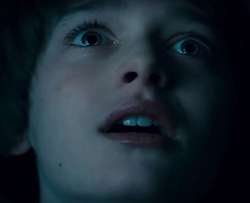 And it turns out that Joyce, who is the ultimate warrior mom and hovering helicopter parent (and also has a new boyfriend, Bob Newby, played by Sean Astin, who works at the local Radio Shack) shepherds Will to the Hawkins Department of Energy lab on a regular basis, where he undergoes therapy – or is interrogation? – with Dr. Owens, a seemingly kind man, because this isn’t the first time Will has gone back to the Upside Down. But is there slime underneath the lab coat? (Since Dr. Owens is Paul Reiser, who played the ultimate corporate sleazeball in Aliens, our trust in him can’t, uh, be trusted.)

And meanwhile, Chief Jim Hopper is no longer hiding those Eggos in a box in the woods. Nope. All that beer in his refrigerator has been replaced with those little toaster-oven waffles, and his trailer is swept and dusted and clean. Because he’s sorta adopted a young girl, a pretty little moppet with short, curly hair, and like all fathers, he has sworn to keep her safe.

The moppet’s name is Eleven.