Mindy Newell: What Goes Around… 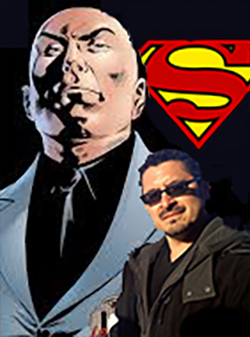 A high-ranking editor at DC Comics has been suspended after three women publicly accused him of forcible kissing and groping in allegations dating back more than a decade.

DC Entertainment on Saturday announced the company is investigating group editor Eddie Berganza after Buzzfeed reported on his alleged history of predatory behavior.

“There will be a prompt and yet careful review into the next steps as it relates to the allegations against him, and the concerns our talent, employees and fans have shared, DC said in a statement, the news site reported.

Former writer Liz Marsham said Berganza kissed her during a party and groped her at a company gathering at a bar in 2006.

Another DC Comics employee reported a similar encounter. Joan Hilty, who is openly gay, said Berganza tried grabbing her at the same bar during a separate incident, according to Buzzfeed.

At least five women confronted DC Comics’ HR with their objections after learning Berganza was being considered for an executive editor promotion. He was promoted anyway, the site said. 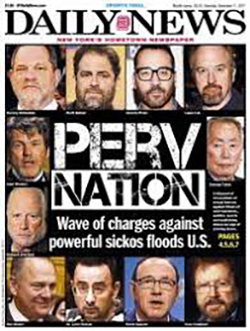 Berganza was demoted to group editor in 2012 after a similar allegation that he forcibly kissed a married freelance writer during the WonderCon convention.

Despite the demotion, Berganza went on to oversee projects related to Superman and Wonder Woman.

I just posted this bit of news on my Facebook page.  My friend Neil Cohen replied:

“I know it was a different time a whole few years ago when this first broke, but how was nothing done then?”

And I replied: “Because this happened yesterday, Saturday, November 11, 2017…”

And my next post: “…and they can’t hide it anymore.”

Ever since October 5, when the New York Times published the Harvey Weinstein bombshell (reported by Jodi Kantor and Megan Twohey), the bombs have just kept on exploding.  Here’s a list, released by the Times yesterday, working backwards from Friday, November 10:

Andrew Kreisberg, Executive Producer of Supergirl, Arrow, and The Flash

Hamilton Fish, President and Publisher of The New Republic

Robert Scoble, Tech blogger and co-founder of the Transformation Group

Chris Savino, Creator and showrunner of “The Loud House”

I’ve only listed the names, but you can go here to see the allegations and fallout.

I’ve also heard Dustin Hoffman’s name bandied about while driving to work and listening to the radio, though that was the only time I heard it.

And speaking of work, well, sometimes the talk can get pretty risqué but lately any jibe or joke has been preceded by is this sexual harassment? or assurances that I am just joking, I’m not harassing you, am I? This is mostly a good thing, I suppose, as awareness is heightened that someone listening might be offended, but at the same time, I can’t help thinking that the “sensitivity-meter” can be working overtime. Meaning, any joke or acerbic comment or ironic observation is capable of offending somebody at any given hour or on any given day—are comedy clubs and HBO specials on the road to extinction?

And then there’s this:

Trump:  I did try and fuck her. She was married.

Trump: No, no, Nancy. No, this was [unintelligible] –  and I moved on her very heavily. In fact, I took her out furniture shopping. She wanted to get some furniture. I said, “I’ll show you where they have some nice furniture.” I took her out furniture – I moved on her like a bitch. But I couldn’t get there. And she was married. Then all of a sudden I see her, she’s now got the big phony tits and everything. She’s totally changed her look.

Bush: Yes! The Donald has scored. Whoa, my man!

Trump: Look at you, you are a pussy.

Trump: All right, you and I will walk out.

Trump: Maybe it’s a different one.

Trump: Yeah, that’s her. With the gold. I better use some Tic Tacs just in case I start kissing her. You know, I’m automatically attracted to beautiful — I just start kissing them. It’s like a magnet. Just kiss. I don’t even wait. And when you’re a star, they let you do it. You can do anything.

Bush: Whatever you want.

Trump: Grab ’em by the pussy. You can do anything.

What goes around comes around.

Mueller’s got you by the balls…

And on another topic…

Hey, Maddy (Maddy Ernst, ½ of the Tweeks). Regarding Stranger Things 2 and your review:

Yep, it totally rocked!
I gotta give Noah Schnapp major kudos here, especially as it seems to me that everyone else gets so much praise and attention from the media and fans. He had an incredibly difficult path as an actor this season, and the kid totally pulled it off!!!
Also, David Harbour and Millie Bobby Brown as Jim Hopper and Jane Ives/Eleven? Loved their pairing!!!!

Totally agree with you regarding Sean Astin.
SPOILER ALERT: The Mind-Flayer/Shadow Monster hovering over the Snow Ball at the middle school–okay, girlfriends, who is infected with the “virus?” Mike? Chief Hopper? Maybe too obvious, hmm? How about Dustin? (My vote.)

One more thing…
I stretched out the binge to two sittings, but even so, nine episodes went by way too quickly. And now it’s gonna be, what, another year until the third season?
That sucks, doesn’t it?