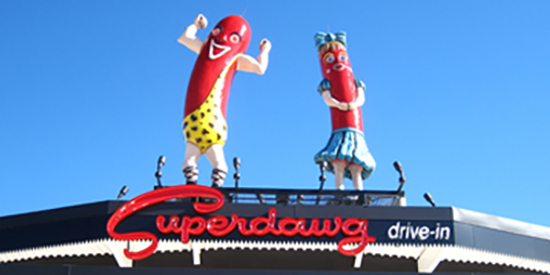 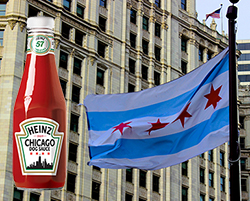 I have a leg in each of two worlds, having spent half of my life living in the Chicagoland area and the other half living in the New York metropolitan area, a.k.a. “The Big Apple” so don’t give me any shit about the word “Chicagoland.” New Yorkers have a problem when it comes to comparisons with other cities, particularly the so-called Windy one, named by a New York newspaper editor who previously held the same position in Chicago. And he wasn’t referring to the weather, but to the native approach to political negotiation.

The fastest way for a New Yorker and a Chicagoan to get into an argument is to say the word “pizza.” Second to that: “hot dogs.” But as they say, the proof is in the pudding. Whereas it is well-known that I loathe airlines and airports, the real reason I drive between the Atlantic Northeast and the Inter-Ocean so frequently is that I am compelled to bring back six to twelve pounds of Vienna hot dogs, also known as the Chicago dog, back to over a half-dozen jonesing New Yorkers. 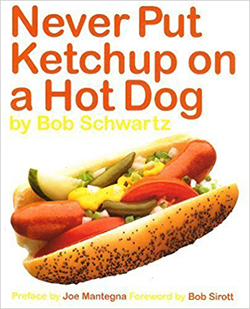 One of the best-known elements of the Chicago hot dog experience is that it is never served – to adults – with ketchup. There have been several books written about this. My landsmen will tell you it’s disgusting and it hides the taste of the sausage.

Of course, that’s bullshit. The traditional Chicago dog is served with mustard, onions (raw or grilled), tomato, relish, a pickle spear, peppers and the most important ingredient: a dash of celery salt. Really, put ketchup on that and nobody will notice – other than Chicagoans. When the famed Nathan’s opened a store in Chicago, they told CBS that their hot dogs do not need all that crap. The reporter, who was not from the Midwest, responded: “but isn’t the traditional Nathan’s hot dog served with sauerkraut?” Nathan’s Chicago store closed down in short order.

But this week the Heinz ketchup company decided enough is enough. There’s money they’re not making in the Windy City, and they need to raise consciousness. They’ve started marketing a concoction called “Chicago Dog Sauce” and, today – National Hot Dog Day – Heinz is giving away an abattoir full of Chicago dogs with the stuff. They even made a cute little video about it.

It’s a very clever gag and a brilliant promotion campaign. If they’re thinking it will cause a major shift in local taste… well, I’m sure they do not. Not even Donald Trump is that stupid. Oh, screw that: Trump eats New York thin crust pizza with a knife and fork, even while in New York City!

It has widely reported that the phrase “hot dog” was the creation of turn-of-the-last-century cartoonist T.A.D. Dorgan. This may be apocryphal – and that Windy City origin might be as well. The National Hot Dog and Sausage Council reports “Some say the word was coined in 1901 at the New York Polo Grounds on a cold April day. Vendors were hawking hot dogs from portable hot water tanks shouting “They’re red hot! Get your dachshund sausages while they’re red hot!” A New York Journal sports cartoonist, Tad (sic) Dorgan, observed the scene and hastily drew a cartoon of barking dachshund sausages nestled warmly in rolls. Not sure how to spell ‘dachshund’ he simply wrote ‘hot dog!’ The cartoon is said to have been a sensation, thus coining the term “hot dog.” 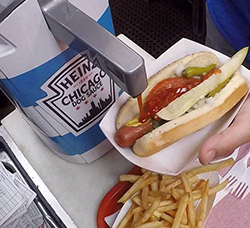 The sausage itself was invented in Vienna Austria in 1487, it gathered national attention in America at the Columbian Exposition in Chicago in 1893, and the hot dog bun was invented at the St. Louis World’s Fair of 1904. Doubtlessly, German and Austrian immigrants were selling these puppies throughout North America during their great immigration throughout the latter half of the 19th Century, suggesting the hot dog was popularized by anarchists.

I realize the Heinz stunt is simply that: a clever promotion and nothing more. I’d be mildly surprised to see their Chicago Dog Sauce on the shelves of the local Jewel Foods chain when I’m next out there buying hot dogs for New Yorkers, but I would not be surprised in the least if it were to be available as a condiment option at the Vienna Sausage company store.

O.K. You can tell the vegans they can come back now.