It’s an interesting new storyline, not just “let’s make a second part but only cheaper”. It’s better to be completely new, and I am actually happy with the movie. It has a lot of humor; it’s quick and entertaining. END_OF_DOCUMENT_TOKEN_TO_BE_REPLACED

In 1992, there may have been nothing bigger and more exciting than the video game [[[Mortal Kombat]]].  Wisely, Midway Games created their own universe with six realms which have unique backstories, all created by the Elder Gods. Players could manipulate their favorite surviving warrior — Johnny Cage, Sonya Blade, Liu Kang, and Jax, — and fight for survival in do-or-die tournaments.

The phenomenon was huge, spawning follow-up games, merchandise, and, of course, movies. Now available for download this week is the first Mortal Kombat film from 1995. The movie can be downloaded from iTunes and played on your iPod, phone, or tablet.

Released on August 18, it grossed $23 million and was proven critic proof. After earning over $70 million, it gave birth to 1997’s [[[Mortal Kombat: Annihilation]]]. The first film had the benefit of Paul W. S. Anderson’s early work, showing us what the director can do with action and other realities.

Warner Digital describes the movie this way: For nine generations an evil sorcerer has been victorious in hand-to-hand battle against his mortal enemies. If he wins a tenth Mortal Kombat tournament, desolation and evil will reign over the multiverse forever. To save Earth, three warriors must overcome seemingly insurmountable odds, their own inner demons, and superhuman foes in this action/adventure movie based on one of the most popular video games of all time. Starring Christopher Lambert (Highlander, Greystoke: The Legend of Tarzan), Bridgette Wilson (Shopgirl, The Wedding Planner), Linden Ashby (Prom Night, Resident Evil: Extinction), Robin Shou (Street Fighter: The Legend of Chun-Li, Death Race) and Talisa Soto (Don Juan DeMarco, License to Kill). Directed by Paul Anderson (AVP: Alien vs. Predator, Death Race).

Here’s a link to see the film’s trailer and remind yourself of the fun and excitement.

Meantime, ComicMix has one free digital download to give away. Tell us who your favorite character from the film is and why. The best answer received by Sunday at 11:59 p.m., as determined by our esteemed panel of judges, will win the download. Good luck.

Chairman, President and CEO Matt Booty called the filing “a difficult but necessary decision,” adding that it buys the company time to figure out how to proceed from here. For now, business continues as usual, and Midway has filed several First Day Motions in hopes of keeping it that way as restructuring takes place. 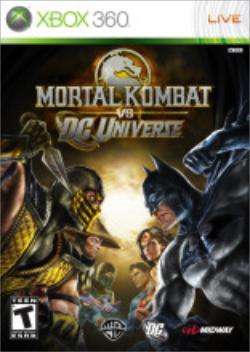 Crossovers are nothing new to comics.  Who could forget when the [[[Teenage Mutant Ninja Turtles]]] found their way into a [[[GrimJack]]] book, or when the Punisher visited the Archie Universe?  Well, apparently, they can cross into game universes too.  As if to answer the challenge put up by [[[Marvel Super Heroes vs. Street Fighter]]] over almost 11 years ago, Midway has released [[[Mortal Kombat vs. DC Universe]]] for the Xbox 360 and PlayStation 3.  Building on the series’ newer 3D fighting mechanics, the new title boasts a refined move set, two separate storylines, three new kombat modes, and, of course, a new roster featuring DC’s mightiest heroes and villains.  So how does the game fare?  Read on…

So, how would the DC characters find themselves caught fighting the kombatants from Earthrealm?  Well, due to several well-timed attacks during battles, both [[[Superman]]] and the lightning God, Raiden, cause a tear in each universe that cause their worlds to collide (and their greatest foes, namely Darkseid and Shao Kahn, to conjoin).  These events are played out in both ends of the story mode, which you can play either from the DC perspective or the MK point of view.  In this mode, players don’t choose their characters. Rather, as the chapters in the story progress, the character they control is swapped out as the story focuses on each new fighter.  This allows the players to get a good handle on several different fighting styles, as well as the differing angles and roles each character has in the story.

Playing the story mode is where fans of DC will really get the most enjoyment out of this title. As focus shifts from hero to villain, other characters flesh out the story and interact with whomever you play as, either in battle or in aid.  And honestly, as hokey as the story sounds, the excellent cut scenes really make it work within the confines of what we know about these characters.  So how are characters like Liu Kang and Scorpion able to put the beat down on Superman and [[[Captain Marvel]]]?  Well, as the worlds collide, they take on each other’s properties.  Since the world of Mortal Kombat is a magic-based realm, and Superman is susceptible to magic…yeah, you can kick Kal-El’s ass.  This also makes our heroes a bit more aggressive…the rage builds within them and the urge to fight grows, making each character stronger and more brutal.  This “Rage” is built up over time in battle, and is unleashed as a yellow aura around the character that strengthens attacks and allows you power through your opponents’ hit,not allowing them to knock you back.

END_OF_DOCUMENT_TOKEN_TO_BE_REPLACED

It’s just over five weeks until the long-awaited Mortal Kombat vs DCU game gets in our hands, and we’ve got even more fuel on the fire to get you pumped including the real truth why Superman won’t be the strongest character, plus:

Kill some time before the debate and  Press the Button!

On the heels of last week’s big release of LEGO Batman: The Videogame, Midway has announced the final characters for their newest game; Mortal Kombat vs. DC Universe. The story takes place after the two franchises collide during a universal "crisis" (probably not the same one). Now fanboys (and fangirls) can finally their aggression on the Justice League like it’s their job. Here’s the complete list:

The game is currently slated for a November release on the PS3 and XBox 360, and for the real gaming fans, you can see a complete list of achievements to unlock here On the page, there is reference to a character only called "JF". No word on who this can be, possibly another cameo? You decide.

At the Liepzig Games Convention, Midway had revealed the latest characters to appear in Mortal Kombat Vs. DC Universe. And is cool as it was to hear that Deathstroke the Terminator will be getting his videogame debut (we’re not counting the animated Teen Titans game), nothing beats game producer Hector Sanchez demonstrating the Joker’s fighting moves for the Game Trailers television show.

Proving once and for all that some DC characters will have finishing moves, the Joker shows how to end a fight with style. See for yourself below. (Warning: It’s rated “M” for a reason.)

JK Parkin over at Blog@ reports that Midway Games has released the identities of two more characters in the upcoming Mortal Kombat vs. DC Universe videogame: Wonder Woman and Deathstroke the Terminator. A preliminary rendering of Wonder Woman is available on the site, as well as a rendering of Green Lantern (seen here) and a series of screencaps from the game featuring Green Lantern in battle, as well as other DC characters (including Joker, Superman and Catwoman).

The announcement was made at the Leipzig Games Convention, and along with the DC characters, Midway also announced the return of Mortal Kombat characters Raiden and Kano in the new iteration. The game is scheduled for release this fall.

The biggest North American comic convention wraps up another show. The hall is closed and the lights are off. But the videos from the show floor live on.

Way back when Mortal Kombat Versus DC Universe was first announced fans worried that Superman would be a horribly unbalanced character. A veteran reader of many Silver Banshee attacks Superman storylines, I speculated that since the Mortal Kombat universe was steeped in magic, this would explain how Sub-Zero could freeze Superman or Scorpion could set him on fire. Turns out I was right.

Midway has released the video shown (seen below) at San Diego Comic-Con where creator Ed Boon explained to fans how his guys can beat up their guys. And it looks amazing! The video also explains new in-fight mechanics: close combat and free fall combat. Also in the video were fights featuring Batman, Flash, and Catwoman.

No word yet if the villain from the Superman Returns movie shows up: A rock. A really big rock.

The flood of video game/comic book crossover news continues as the trailer to Mortal Kombat vs. DCU debuts. Check it out below: