The trailer doesn’t quite feel like the book, but I can see where they’re going with it…

Red, based on the graphic novel by Warren Ellis and Cully Hammer, hits theaters October 15th. Here’s the details:

Frank (Bruce Willis), Joe (Morgan Freeman), Marvin (John Malkovich) and Victoria (Helen Mirren) used to be the CIA’s top agents – but the secrets they know just made them the Agency’s top targets.  Now framed for assassination, they must use all of their collective cunning, experience and teamwork to stay one step ahead of their deadly pursuers and stay alive.  To stop the operation, the team embarks on an impossible, cross-country mission to break into the top-secret CIA headquarters, where they will uncover one of the biggest conspiracies and cover-ups in government history. 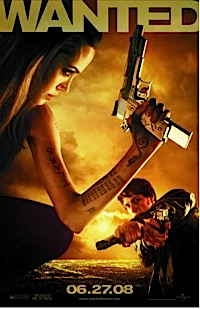 , the film based on the Top Cow miniseries by Mark Millar and J.G. Jones, is a difficult request. Directed by Timur Bekmambetov, the film is enjoyable, but solely on a puerile level, and undoubtedly not for the reasons that Bekmambetov intended. This movie is exactly what would happen if a hyperactive 16-year-old was given free range to write a script; it features an Angelina Jolie butt-shot, bullets that don’t travel at normal speed or in a straight line, and the euphoria of telling off your boss and all the jerks at work. But when asked if this film is actually any good, or even a good comic adaptation, the answer is a strong “No.”

Those of you who remember the comic series remember a truly raunchy adventure about an assassin named Fox who recruits a cubical jockey to take his father’s place in a secret society of supervillains known as The Fraternity. From there, we get a few twists and turns thrown our way, but primarily, this was a comic book about all things comic books: superheroes, villains with puffy capes, a cannibal baddie, and even a few digs on other genre flops like Adam West’s Batman

With that in mind, the movie takes its own liberties, and generously at that. Replace “supervillains” with “assassins,” “puffy capes” with “bullets that curve,” and “cannibal” with Morgan Freeman. It is totally understandable how this movie was sold, because people are so afraid of doing superhero films that don’t have names like “[[[Iron Man]]]” or “[[[Batman]]]” attached to them, so instead they were going for a Matrix

END_OF_DOCUMENT_TOKEN_TO_BE_REPLACED

Hong Kong is generally considered to be one of the most polluted major cities in the world. Its beautiful skyline is virtually invisible due to a permanent haze, and the water is so dismal that the producers of the next Batman film, The Dark Knight, killed a scene where Batman was to drop from a plane into the harbor because the water quality could pose a significant health risk to the stuntmen.

Well, now the shoe is on the other foot. The Dark Knight producers asked the owners of 60 buildings facing a waterfront to keep their lights and signboards on all night for a week to make for a more visually stunning scene.

For some reason, environmentalists went ape. The amount of energy that would be wasted by such a stunt would be insane in a city half as polluted as Hong Kong.  "We welcome the filming of Batman in Hong Kong, but why do we need to keep the lights on to make the backdrop?" Green Sense project manager Gabrielle Ho told The Associated Press. "It seems like film-making is coming before environmental protection. We believe producers are able to create the same effects via post-productions works, but instead they are asking us to turn on so many lights, wasting so much energy," Ho concluded.

END_OF_DOCUMENT_TOKEN_TO_BE_REPLACED

The trailer for Evan Almighty will debut on this Thursday. NBC will premiere the trailer during its "Night at the Office" event, in which airings of multiple episodes of the hit sitcom will air over the course of that evening’s prime time (8 pm – 11 pm Eastern/Pacific; 7 pm – 10 pm Central).

Steve Carell, reprising his role as the polished, preening newscaster Evan Baxter of Bruce Almighty, is the next one anointed by God to accomplish a holy mission. Director Tom Shadyac returns behind the camera for this next episode of divine intervention. This time, however, his cast grows two-by-two.

Newly elected to Congress, Evan leaves Buffalo behind and shepherds his family to suburban northern Virginia. Once there, his life gets turned upside-down when God (the divine Morgan Freeman) appears and mysteriously commands him to build an ark. But his befuddled family just can’t decide whether Evan is having an extraordinary mid-life crisis or is truly onto something of Biblical proportions…

Angelina Jolie, James McAvoy and Morgan Freeman in will be starring in the film adaptation of Top Cow’s Wanted mini-series for director Timur Bekmambetov, according to Universal Pictures.

Variety reports Jolie took on the role after the screenplay, written by Michael Brandt and Derek Haas, was rewritten for her by Lara Croft Tomb Raider: The Cradle of Life writer Dean Georgaris.

The Mark Millar / J.G. Jones mini-series, according to Millar’s agent, was sold to Universal before the final chapters were even plotted.

Wanted begins shooting in May.